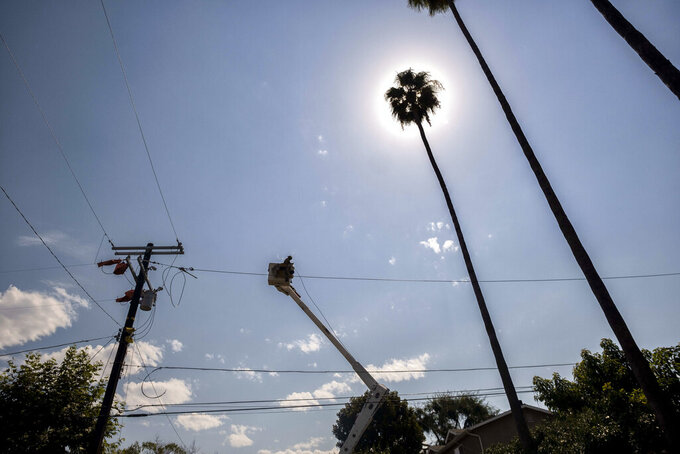 FILE - In this Tuesday, Aug. 18, 2020, file photo, Petrelli Electric Inc. crew members work to replace deteriorating power poles and transformers and upgrading wires to higher capacity in the Sunland-Tujunga area of Los Angeles. As if the pandemic and recession weren’t bad enough, millions of Californians have been facing the recurring threats of abrupt blackouts during a heat wave in the nation’s most populous state. (Hans Gutknecht/The Orange County Register via AP, File)

BERKELEY, Calif. (AP) — As if the pandemic and economic recession weren't bad enough, millions of Californians now face recurring threats of abrupt blackouts during a heat wave in the nation's most populous state.

California's Independent System Operator, a nonprofit agency that manages the state's power supply, ordered utilities to impose temporary blackouts for the first time in 19 years last Friday and did so again Saturday, pulling the plug on hundreds of thousands of customers for one to two hours. The specter of so-called “rolling outages" have loomed as a possibility every day since, and were narrowly averted Monday evening after “stunning" conservation efforts, according to ISO president Steve Berberich.

Conservation helped avoid threatened outages again Tuesday and may be needed again Wednesday to keep the power running. Temperatures are finally supposed to ease Thursday, but more outages could still loom if things heat up as much as some forecasts suggest.

The blackouts seemed to catch government officials off guard, despite an ISO warning in January that the state could run low on power over the summer if several western states were to experience extreme heat at the same time — which indeed happened several days ago.

“This has been a rude awakening for California," said Najmedin Meshkati, a University of Southern California civil and environmental engineering professor who has studied the state's power supply.

The outages prompted Gov. Gavin Newsom, a Democrat, to order an investigation into how the state's energy supply failed to keep up with demand. President Donald Trump also weighed in with a Tuesday tweet blaming the state's Democrats for the mess.

Q: California had rolling blackouts two decades ago because of power shortages. Why hasn't it learned from past mistakes?

Circumstances were very different in 2000-2001. Back then, a recent deregulation of the state power market was going horribly awry as energy traders manipulated energy supplies to gouge utilities. Blackout fallout eventually led voters to oust then-Gov. Gray Davis in a recall election.

These days, California is trying to adapt to environmental mandates that have shut down natural-gas power plants in favor of solar and wind energy. In addition, the San Onofre nuclear power plant in southern California shut down in 2013 for safety reasons. Nearby western states have also been phasing out coal-burning plants, reducing other energy supplies available for California to import.

Renewable energy reduces pollution, but it can run short if winds die down or demand surges after sundown. As much as 25% of California's power supply comes from solar sources. Both came to pass last Friday and Saturday as temperatures stayed high into the evening, pushing up air-conditioning demand for electricity.

Energy shortages used to be the most severe around 4:30 p.m. on hot summer days, but are now occurring after 7 p.m., the ISO says.

Others believe he problem has more to do with California failing to manage and properly store power generated from renewable sources. “There is a certain level of misinformation going on out there," said Daniel Kammen, a professor of energy at the University of California, Berkeley.

The state's highest recorded demand for electricity occurred in August 2006 when usage peaked at 50,270 megawatts, according to the ISO. No blackouts were necessary. But at the time, natural-gas plants were still producing about 7,000 megawatts of electricity that is longer available, said Severin Borenstein, an ISO board member who is also a professor of business administration and public policy at the University of California. Berkeley.

A September 2017 heat wave caused demand to spike to 50,140 megawatts, the ISO said Tuesday. But power imported from other western states that weren't as hot helped save the day.

The recent shortages would have likely been even worse but for pandemic restrictions that closed many large offices. By some estimates, the pandemic so far has reduced overall electricity demand in California and other parts of the country by 8% to 10%.

Yes, particularly in Northern California. Such blackouts are likely to be more severe than what the state has just experienced. Some of the more than 2 million people affected by fire-fighting outages last fall were left without electricity for several days, not just an hour or two.

It's highly unlikely that the ISO would order rolling outages at the same time as a fire-prevention blackout, as demand will automatically have already been reduced, Borenstein said.

Investments in electricity storage and distribution would do the trick, Kammen said. But those could be expensive, and even harder to budget for at a time when the state faces huge deficits amid the pandemic-related slowdown.

California also may have to consider extending the lifetime of its last nuclear power plant in Diablo Canyon. The plant is currently scheduled to close by the end of 2025, and keeping it open would likely face staunch resistance from environmentalists and politicians.

Conservation might be an easier and quicker option. Californians have conserved effectively in the past, most recently in a water-saving campaign during a prolonged drought. But no one knows if homeowners will agree to turn up thermostats a few degrees to prevent blackouts.

Utilities, however, can encourage such behavior. Borenstein suggests allowing utilities to charge higher rates from 4 to 9 p.m. in exchange for lower prices at other hours as part of a voluntary program.

Whatever measures the state takes may only be the first step. “Looking ahead, who knows what to expect," Borenstein said. “All we know is the climate is changing."