Q&A: Clooney on 'Midnight Sky' and his twilight as an actor 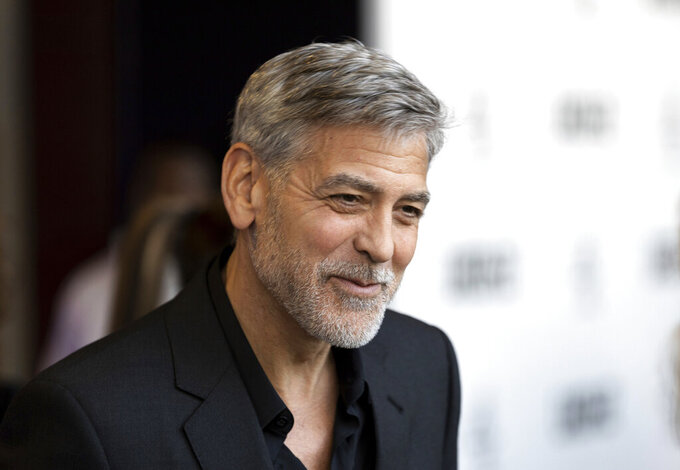 FILE - In this Wednesday, May 15, 2019, file photo, actor George Clooney talks to reporters on arrival at the premiere of the television mini-series "Catch22," in London. Clooney was honored Monday, Dec. 7, 2020, by co-stars and colleagues at the annual film benefit for the Museum of Modern Art, held virtually. (Photo by Grant Pollard/Invision/AP, File)

NEW YORK (AP) — How has George Clooney been handling isolation? Aside from spending time with his wife, Amal Clooney, and their 3-year-old twins, and editing his new film “The Midnight Sky,” he's relied on, like many others, a text chain with pals and Zoom. He just got off one with Matt Damon and John Krasinski.

“In some ways, we keep more in touch now than we did before,” says Clooney, speaking by phone from London.

“The Midnight Sky,” which Clooney directed and stars in, is an apocalyptic sci-fi drama with some striking solitude. A thickly bearded Clooney plays an astronomer with terminal cancer living at the Barbeau Observatory in the Arctic Circle. It’s 2049. When cataclysm covers the globe, he — and a young, unspeaking girl (Caoilinn Springall) — are potentially all that remains, along with the returning crew of a space expedition to a Jupiter moon.

Debuting Wednesday on Netflix, “The Midnight Sky,” based on Lily Brooks-Dalton's novel “Good Morning, Midnight," is Clooney's seventh film as director and his biggest scaled production yet. In an interview with The Associated Press, the 59-year-old actor-filmmaker discussed his new movie, the arc of his career and his latest novelty device of choice. Answers have been edited for length and clarity.

AP: You finished shooting “The Midnight Sky” in February, right before the pandemic began. How has your year been since?

Clooney: I’m kind of doing what everyone’s doing. Washing dishes and doing laundry and mopping floors. Mostly I just wish I was able to see my mom and dad, and that kind of thing. They’re social creatures and it’s not as much fun when they can’t be out with their old friends.

AP: It's been years since you were the lead in a film. Why?

Clooney: Things change for you as an actor. The roles that are brought to you become very different. I was doing an interview the other day and they asked if this was the way my career is going to be going, playing more character actor roles. I was like, well, I didn’t want to. (Laughs) But I’m almost 60 years old. That’s how it works. I focus on actors who I admired greatly and how they handled their career. (Paul) Newman, who was a very good friend of mine, by the time he was in his mid-’50s, he’s doing “The Verdict,” which is a character-actor piece. Even though he was a giant movie star, one of greats of all time, he was developing as he grew older the character-actor pieces he found interesting, that demanded less of him.

Clooney: Yeah, I just watched that the other day. I hadn’t seen it in forever. I forgot about him stealing the snow plow. That’s a really underrated movie. But there’s only a couple ways you can go if you’re a person in my shoes. You can try to deny your aging. You can dye your hair and get a face lift and try to still be the guy who gets the girl in the movies. Or you can accept that you’re getting older and be that guy. The reason I got into directing and writing and producing 35 years ago was because I knew at some point I don’t want to be worried about what some casting director thinks of me at -- I used to say 60 but I’ll move it to 65 now.

Clooney: When I moved to Hollywood, I went and lived with my Aunt Rosemary (a top singer in the ‘50s) for about six months until she kicked me out. Then I was living on the floor of an apartment for a couple years. But the reality was she was part of that continuum. She was married to Jose Ferrer. She’d have people over to the house. Frank Sinatra, Sammy Davis Jr. and Dean Martin. And I got to spend time around that kind of world. Before that I drove Rosemary when she was doing a show called “4 Girls 4.” It was Margaret Whiting and Kaye Ballard and Kay Starr. So I had an understanding of the continuum in the entertainment industry. We all stand on the shoulders of the people who did it beautifully before us. I got to be friends with Gregory Peck and would go over to his house for dinners with (Peck’s wife) Veronique. Some of the most memorable nights I ever had was sitting around listening to them talk about “Roman Holiday.” It’s an amazing thing, when stars were giants.

AP: You said you were “ashamed” as a native Kentuckian when charges weren’t pursued in the death of Breonna Taylor. Do you feel a disconnect with your home state?

Clooney: The divide is so different now. I do blame the way we get our information. It really started when Fox News came in and said: We’re going to give you another version of reality. When I grew up in Kentucky as a Democrat, that wasn’t a particularly popular thing. But you weren’t demonized by it. My parents voted for McGovern and everyone around them voted for Nixon, but we were all friends. It’s just what it was. Because you’re all starting from the same fact base. NBC, ABC and CBS are all giving you basically the same news and then you take that into your political persuasion, digest it and come up with your own opinion. Now the internet has obviously made it a thousand times worse.

AP: One thing I think people missed in that Tom Cruise on-set audio was the fear in his voice for the future of the industry. Are you worried for what Hollywood might look like after the pandemic?

Clooney: Well, no. My concern is only specifically in the theaters themselves because they’re going to have to tread water for at least six months before people are in anyway comfortable enough to go in big groups. So you’ve got to keep them afloat. They are a part of our economy. They’re what people do on a Friday night. People have to get out of the house. It’s like music venues for concerts. We subsidize oil companies, we can subsidize theaters. Having said that, once we get through it, this sounds so much like everything we heard when television and VHS and DVDs came in. I have no fear at all that the theater world is going to be around.

AP: What drew you to “The Midnight Sky”?

Clooney: What I always saw in this what the idea of what regret can do to you. I always thought what he’s really dying of is not cancer but regret. It’s killing him. I know people who are older -- older than me, even -- who live with real regret. It’s deep in them. When you get older, it’s a cancer. Everyone has regrets. You hope you don’t have the ones that last a lifetime.

AP: Has working alongside Amal, while she’s in the next room waging humanitarian battles, changed your approach to moviemaking at all?

Clooney: For the last 15-20 years, I’ve spent about half of my day working on things other than the movie business because I have interests in other issues around the world. But there are some funny moments. I have an office and she has an office and they’re kind of up against each other. The other day, I was doing the Howard Stern Show. We’re talking about, like, a prank pooping in a cat box. And on the other side of the wall, my wife is having a conversation trying to keep Maria Ressa from going to prison in the Philippines. She can hear me and I can hear her. We go to dinner afterward and say: What an insane household we live in.

AP: You’ve brought renewed attention to the Flowbee by saying you use it to cut your own hair. Is there any other novelty device you’d like to plug?