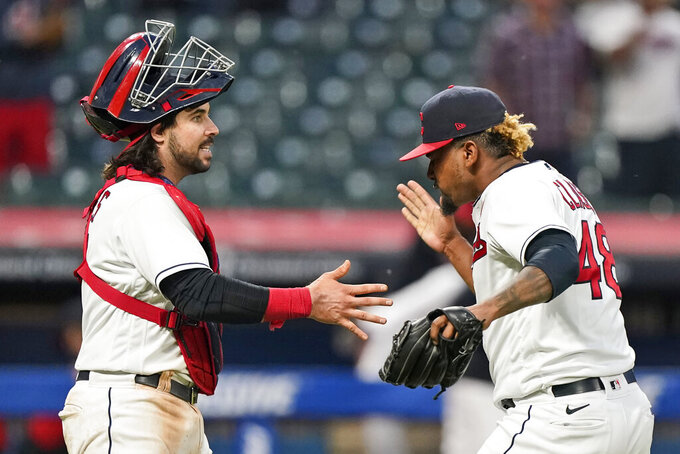 Cleveland Indians relief pitcher Emmanuel Clase, right, is congratulated by catcher Austin Hedges after the Indians defeated the Chicago White Sox 3-1 in the second baseball game of a doubleheader, Monday, May 31, 2021, in Cleveland. (AP Photo/Tony Dejak) 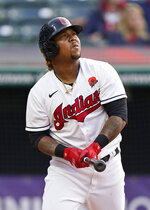 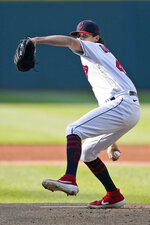 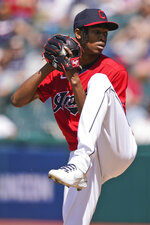 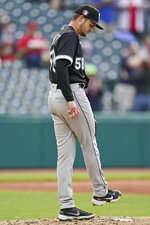 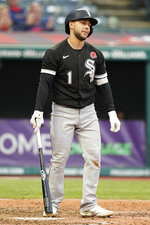 CLEVELAND (AP) — Indians manager Terry Francona was drained and looking forward to some sleep after a long weekend in Rhode Island for a family wedding.

The Indians were just as tired.

“They've had a lot of baseball,” Francona said.

José Ramírez's two-run homer and a solid start by reliever Cal Quantrill led Cleveland to a 3-1 win over the Chicago White Sox on Monday, giving the Indians their second straight split of a seven-inning doubleheader in two days.

Ramírez connected for his 13th homer in the third inning off Jimmy Lambert (0-1) to break a 1-1 tie as the Indians, who rallied to win Game 2 on Sunday against Toronto, got back the game they dropped earlier to the AL Central-leading White Sox.

The back-to-back doubleheaders — necessitated by a postponement on Saturday— put a strain on Cleveland's pitching. But while it was tough, it could have been so much harder if not for Major League Baseball changing the doubleheader format last year due to the COVID-19 pandemic.

“I thought I was going to hate going to seven and seven,” Quantrill said. "I thought it was changing baseball. I have to say, I think it makes a lot of sense now — 28 innings in two days. If we had nine-inning games maybe that’s not possible. It makes sense. I see why they’ve done it.

“I’m sure there are players who don’t like it, but I feel like we were able to survive these last two days by that rule change,” he said.

In the opener, Adam Eaton’s two-run homer and José Abreu’s sacrifice fly in the eighth inning sent the White Sox to an 8-6 win. Indians starter Triston McKenzie struck out a club-record eight straight hitters, two short of the major league record set by Hall of Famer Tom Seaver in 1970.

Quantrill made his first start in 2021 after 17 relief appearances and held the White Sox to one run and four hits over 3 2/3 innings. The right-hander didn't pitch long enough to be credited with the win, but he kept Chicago in check while the Indians figured out Lambert, who was making his first career start.

In the third, Amed Rosario beat out a single to short right with one out, taking second when White Sox second baseman Nick Madrigal's throw nearly went into the Chicago dugout.

Then, Ramírez, who seems to come up with a big hit every other day, belted a 3-1 changeup from Lambert over the wall in right.

Phil Maton (1-0) gave up a leadoff double in the sixth before striking out Abreu and Eaton. Emmanuel Clase allowed a single and struck out the side in the seventh for his ninth save.

Eaton returned to the lineup in Game1 after missing several with a tight hamstring. After Abreu battled James Karinchak (2-2) and hit a liner to left to score Billy Hamilton, Eaton connected for his fifth homer.

But it was Abreu, the reigning AL MVP who made it possible with a quality at-bat. He fouled off a 3-2 pitch from Karinchak before delivering.

“That at-bat by Abreu, it would be tied for first for one of the greatest I’ve seen against a pitcher of that caliber in that kind of situation,” White Sox manager Tony La Russa said. “I’ll never forget it and our fans will never forget it.

“You drive in runs, it’s one thing. It’s really a skill. But you come in and produce in a situation like that, that goes to the next level.”

Chicago starter Carlos Rodón shook off allowing back-to-back homers in the first inning and hung around for six. He pitched a no-hitter — one of six in the majors this season — against the Indians on April 14.

Codi Heuer (4-1) pitched the seventh and Aaron Bummer gave up one run in the eighth before getting his first save.

McKenzie set a club record for consecutive strikeouts and César Hernández homered twice but also had two errors for the Indians.

After giving up four runs in the second, McKenzie was almost unhittable.

The right-hander, recently sent down to the minors to work on his control, struck out Abreu to end the third and fanned the side in the fourth and fifth to tie the team's previous consecutive strikeout record held by Corey Kluber (2014).

McKenzie broke it by striking out Jake Lamb to open the sixth before giving up a single to Yoán Moncada and being pulled. The 23-year-old was given a roaring ovation as he walked to the Indians' dugout after his strong outing.

“All but the one inning, I thought he was really good,” Francona said. “He missed some bats. He threw a good curveball. He attacked with a fastball and got it by their barrel for the most part.”

His run of eight consecutive strikeouts was the most by an AL starting pitcher since Detroit's Doug Fister fanned nine straight on Sept. 27, 2012.

Francona had never managed a seven-inning doubleheader, so he was curious to see how it would go.

“I’m OK with it,” he said. “I understand why they’re doing it. They’re trying not to have a bunch of roster moves and pitching and everything, so I’m OK with it. I think there are other rules that I’ll probably save my fight for.”

White Sox: RHP Michael Kopech went on the 10-day injured list before the opener with a strained left hamstring. Kopech is 2-0 with a 1.78 ERA in three starts and 13 games.