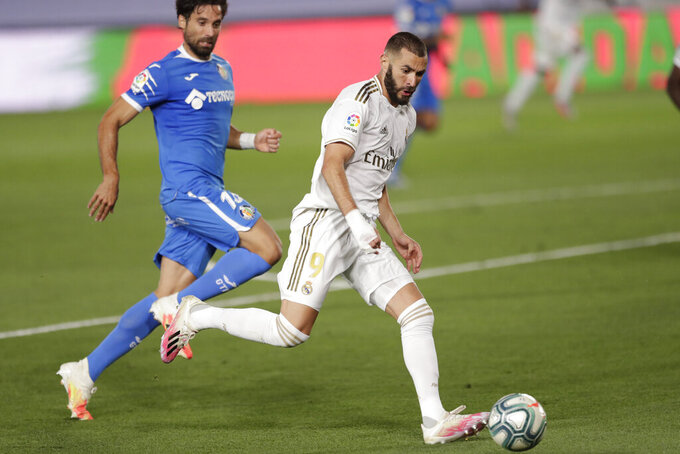 BARCELONA, Spain (AP) — Sergio Ramos scored a late penalty to give Real Madrid a 1-0 victory over Getafe on Thursday, increasing its lead over Barcelona to four points with the Spanish league nearing its end.

Ramos converted the 79th-minute spot kick after Getafe made its first mistake in an otherwise flawless defensive performance to stifle the more talented rivals.

Madrid right back Dani Carvajal raced into the area and cut back around defender Mathías Olivera, who tripped him and gave Ramos the chance to score the winner that boosts his team’s chances of dethroning Barcelona. It was the ninth league goal of the season for the Madrid center back.

Madrid has won all six matches since the restart of the league following a three-month stoppage for the coronavirus pandemic. Barcelona, meanwhile, settled for a third draw in four games on Tuesday when it was held 2-2 by Atlético Madrid.

Madrid and Barcelona both have five matches left. Madrid holds the tiebreaker in case of they finish level on points.

“They pushed us to the limit and thanks to a good combination we were able to get the three points,” Carvajal said. “We had to take advantage of Barca’s slip against Atlético and we saw tonight’s like a final.”

Getafe was left in sixth place, five points from Sevilla in fourth place and the last Champions League berth.

Getafe midfielder David Timor set the tone just seconds into the match when he earned a yellow card for a hard foul that left Francisco “Isco” Alaracón writhing on the turf.

That was the first of 10 bookings in the game at Madrid’s Alfredo Di Stéfano Stadium, where the team is playing its home matches while its Santiago Bernabeu is being renovated.

Getafe, which comes from a working-class Madrid neighborhood, has become a challenger for a top-four finish thanks to its tough defense.

Thibaut Courtois had to react fast to parry a ball deflected off Getafe’s Xabier Etxeita in the game’s first scoring chance in the ninth minute.

His counterpart David Soria did even better to get low and wide to deny Vinicius’s shot for Madrid in the 25th.

The rough-and-tumble contest lost Madrid defender Raphael Varane before halftime when he was apparently left groggy by a strike that hit him in the face.

Getafe started the second half with the same pressure it applied from the start.

Striker Jaime Mata came close for Getafe when he floated the ball over Courtois and onto the top of net in the 58th after his teammates had stolen the ball from Ferland Mendy.

But Madrid got its breakthrough when Karim Benzema played Carvajal free down the right flank.

“Getafe is a small team that has been playing well for several years now, but we are still a small team. I think it is noteworthy how we played here today,” said Getafe coach José Bordalás. “We asphyxiated Madrid for stretches. It is too bad it got away from us.”

Also, Rubén García scored twice to lead Osasuna to a 2-0 win over Eibar.