Rangers owner hoped for Series in new park -- with his team 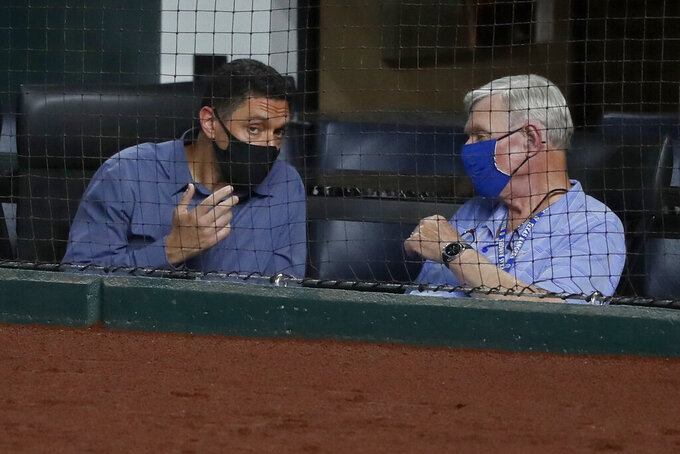 FILE - In this Aug. 12, 2020, file photo, Texas Rangers general manager Jon Daniels, left, talks with Ray Davis, one of the team's owners, during the fourth inning of the Rangers' baseball game against the Seattle Mariners in Arlington, Texas. Davis and the Rangers ownership had hoped for the chance to win the World Series in their first season in their new ballpark. The World Series will be played in the new $1.2 billion stadium, but without the Rangers. Globe Life Field will be a neutral site for two National League playoffs series before the World Series. (AP Photo/Tony Gutierrez, File)

Ray Davis and the Texas Rangers ownership group will host the 2020 World Series, just as they had hoped when they broke ground on a new stadium three years ago . Just not with the team they expected.

Instead of a splashy debut year in the the $1.2 billion ballpark with a retractable roof, the Rangers finished an American League-worst 22-38 in the pandemic-shortened season in front of no fans.

Globe Life Field will have a national showcase when it hosts the first neutral site World Series. The ballpark also will host a National League Division Series and the NL Championship Series, with a limited number of fans allowed for the final two rounds.

While disappointed about his team's record, Davis said he feels good about a youth movement that took over midway through the season. He expressed confidence in 15-year general manager Jon Daniels and said he was impressed with how second-year manager Chris Woodward and his staff handled a difficult season.

The Rangers missed the playoffs for the fourth year in a row since back-to-back AL West titles in 2015-16, the end of a seven-season span that included their only two World Series appearances in 2010 and '11, right after Davis and his group bought the team.

“Jon has demonstrated that he and his team can put together winning ball teams," Davis said. “If you thought about going out and replacing him, all you have is a question mark. We have a known entity.”

As many as four players 22 years old or younger were in the lineup. They were among nine players who made their big league debuts for Texas this season.

"They are fun to watch. They are full of enthusiasm,” Davis said. “This foundation is strong, and in a year or two you are going to see a team with these young guys is going to be more than competitive.”

The Rangers will have a smaller payroll next season, largely because of the financial uncertainty created by the pandemic. Texas furloughed about 60 full-time employees in mid-July, about 12% of its roughly 500 full-time workers. Davis said the plan is to bring back most of them and restore their salaries Jan. 1, but he said that could change based on the pandemic.

Davis didn’t provide specific payroll numbers but said Daniels will have flexibility to be opportunistic, whether go re-sign a current player or add a free agent.

The club isn't likely to exercise its $17.5 million club option for Kluber, obtained from Cleveland in a trade last December, around the time they agreed to mutiyear deals with free agent pitchers Kyle Gibson and Jordan Lyles. Kluber pitched one inning in his only start.

Lefty Mike Minor, a 2019 All-Star in the last year of his contract, was traded to Oakland on Aug. 31. Lance Lynn also was offered at the trade deadline but wound up staying.

“When we went into this year, I looked at our starting five and our three guys behind it, some of the pundits rated us as having one of the best starting five,” Davis said. “When we got a month into the season I’m sitting here ... what in the world happened?"