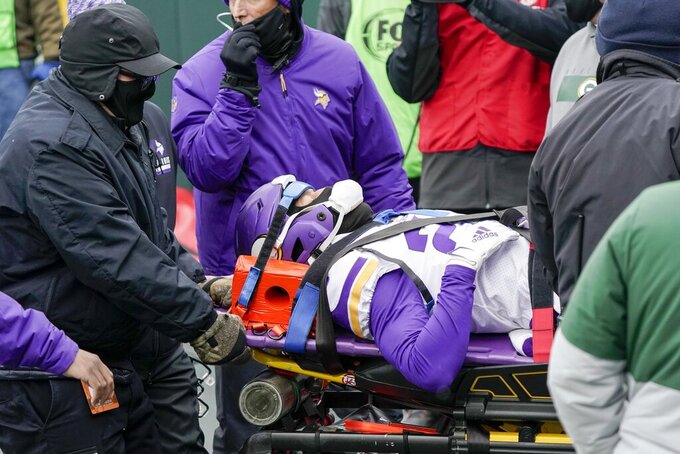 Minnesota Vikings' Cameron Dantzler is taken off the field after being injured during the first half of an NFL football game against the Green Bay Packers Sunday, Nov. 1, 2020, in Green Bay, Wis. (AP Photo/Morry Gash)

Baltimore Ravens left tackle Ronnie Stanley is out for the season after injuring an ankle against Pittsburgh on Sunday, two days after the All-Pro signed a five-year extension worth a reported $99 million.

Stanley had an air cast applied to his left ankle and was taken off the field on a cart after he was accidentally undercut by Pittsburgh’s T.J. Watt in the first quarter of Baltimore's 28-24 loss. The Ravens also played most of the game without right guard Tyre Phillips, who injured an ankle in the first quarter.

Cleveland star defensive end Myles Garrett injured a knee in the first quarter and played sparingly in the second half of a 16-6 loss to the Las Vegas Raiders. The NFL sacks leader will undergo an MRI on Monday.

Garrett, who was already dealing with an ankle injury, was used on obvious pass-rushing downs but lacked his usual explosiveness and didn't have a sack for the first time in seven games.

“It is part of the game,” Garrett said. “You get hampered with things like that, and you just try to play through to the best that I can or best that I could. It just started wearing on me."

Raiders right tackle Trent Brown, who recently tested positive for COVID-19, was inactive because of an illness the team said was not related to the coronavirus.

A person with knowledge of Brown’s status told The Associated Press that Brown was going to stay overnight in a Cleveland hospital. The person spoke on condition of anonymity because no details about Brown were announced. The NFL Network reported that Brown was sent to the hospital after a pregame IV caused air to enter his bloodstream.

Minnesota cornerback Cameron Dantzler was taken to a hospital for evaluation after being taken off the field on a stretcher in the first half of a 28-22 win at Green Bay. The team said the 22-year-old had full movement in his body.

Dantzler, who was recently activated off the COVID-19 list, was being evaluated for a neck injury and concussion after his facemask collided with the leg of teammate Anthony Harris.

Tennessee receiver Adam Humphries was ruled out with a concussion against Cincinnati. Humphries left the field on a golf cart after Bengals safety Jessie Bates III hit him in the head while Humphries was trying to make a deep catch over the middle during the final minute of the first half in the Bengals' 31-20 victory.

Buffalo ruled out center Mitch Morse with a possible concussion in a 24-21 win over New England. The 28-year-old has a history of head injuries. Morse sustained his fourth concussion during training camp.

Los Angeles Rams cornerback Jalen Ramsey was ruled out just after kickoff against Miami because of an illness.

Los Angeles Chargers defensive end Joey Bosa left in the fourth quarter of a 31-30 loss to Denver and was being evaluated for a concussion.