Rays add All-Star OF Meadows to ALDS roster vs. Yankees 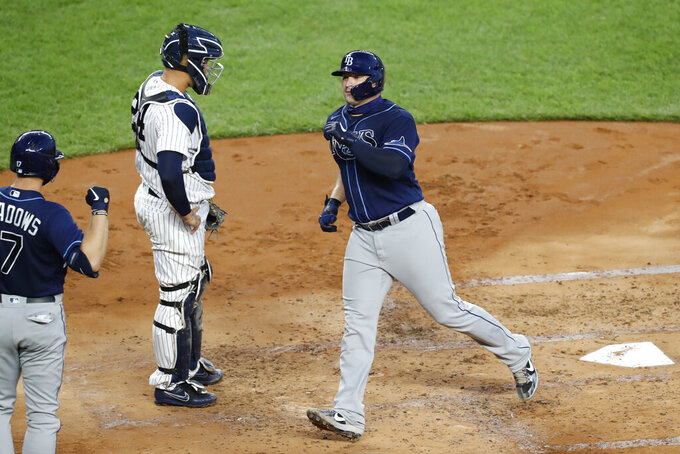 Tampa Bay Rays catcher Mike Zunino, right, crosses the plate after hitting a solo home run and before greeting the Rays Austin Meadows, left, during the third inning of a baseball game against the New York Yankees, Wednesday, Aug. 19, 2020, in New York. Yankees catcher Gary Sanchez (24) stands with his hands on his hips. (AP Photo/Kathy Willens)

SAN DIEGO (AP) — The Tampa Bay Rays added All-Star outfielder Austin Meadows to the roster Monday for the start of their AL Division Series against the New York Yankees but did not include him in the lineup for Game 1.

The 25-year-old Meadows worked out with the team through the weekend and has been facing live pitching. Tampa Bay manager Kevin Cash went with Randy Arozarena, Kevin Kiermaier and Manuel Margot in the outfield for the opener against Yankees ace Gerrit Cole, leaving Meadows on the bench.

The Yankees made just one change from their wild-card round roster, removing third catcher Erik Kratz and adding right-hander Michael King.

New York is carrying 14 pitchers on its 28-man roster, while Tampa Bay went with 13 for the best-of-five series set to be played on five consecutive days.