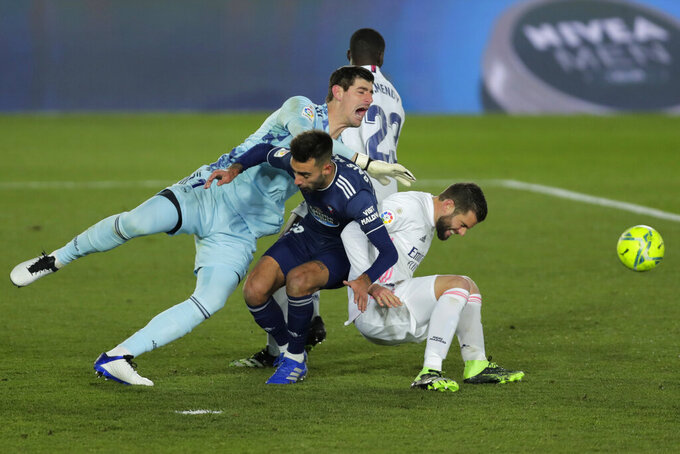 BARCELONA, Spain (AP) — Marco Asensio and Lucas Vázquez set one another up for goals to help Real Madrid earn a 2-0 win over Celta Vigo on Saturday, as the defending champions edged one point above Atlético Madrid at the top of the Spanish league.

Second-place Atlético has played three fewer matches than Madrid and will have the chance to return to the top when it visits Alavés on Sunday.

Asensio crossed to the far post for Vázquez to head in Madrid’s opener in the sixth minute. Vázquez then set up his fellow forward for Asensio to double the lead in the 53rd.

“We played a complete match from start to finish,” Real Madrid coach Zinedine Zidane said. “We controlled the game, were balanced in our transitions between attack and defense, and recovered the ball with our pressure.

“We are feeling good. But there is still a long way to go in this league,” Zidane said about the title race as the league approaches its midway point.

Celta had arrived at Madrid’s Alfredo Di Stéfano stadium as one of the hottest teams in Spain. But Vázquez and Asensio punished Celta for its aggressive pressure which left too much space on the flanks.

It was the first loss in seven rounds for Celta since former player Eduardo Coudet took over as coach in November. Celta remained in eighth place.

Madrid was without central defender Sergio Ramos due an unspecified stomach ailment. But this was unlike other matches which Madrid has struggled to win in his absence. Replacement Nacho Fernández stepped in and made two stops to snuff out Celta’s only shots on goal.

Celta lost top scorer Aspas to an apparent right-thigh problem. He walked off the field grimacing when substituted, seconds before Asensio scored Madrid’s second goal after a quick counterattack started by Luka Modric’s interception of a pass by Jeison Murillo.

Asensio’s goal was his first of the season. The 24-year-old forward is slowly regaining his form since he returned in June after several months spent recovering from a ligament tear.

“Losing our top player made it tougher for us, but we stayed in the game and looked to score until the very end, so that is going to help going forward,” Coudet said.

Sevilla needed goalkeeper Yassine Bounou to save Nabil Fekir's penalty kick so it could salvage a 1-1 draw with a Real Betis side that was missing several players due to COVID-19 infections.

Jesús “Suso” Fernández put Sevilla ahead against the flow of play in the 48th. Sergio Canales converted a penalty after Diego Carlos fouled Loren Morón in the box to level for Betis in the 53rd. It was Canales' third goal in two matches since returning from injury.

Fekir stepped up to the spot for Betis with 15 minutes remaining after he was fouled by Marcos Acuña, only to have his attempt smothered by Bounou.

Mexico forward Diego Lainez led Betis in the first half, when he set up Fekir and Canales for shots that narrowly missed.

Betis was without Joaquín Sánchez, Andrés Guardado, Martín Montoya and Álex Moreno after they tested positive for the coronavirus.

Sevilla was left in fifth place and Betis in ninth.

The Seville derby is usually held amid an intense fan rivalry. This time it was played without spectators like the rest of the matches in Spain due to the pandemic restrictions.

Gerard Moreno led Villarreal to a 2-1 win over Levante after netting his ninth goal of the season to leave him equal with Celta’s Aspas as the competition’s top scorers.

Moreno added to Fernando Niño’s opener when the Spain striker slotted a right-footed shot just inside the upright in the 54th.

Moreno also hit the post late after Levante substitute Sergio León pulled one back with a header.

Israel forward Shon Weissman scored in the first half as Valladolid won 1-0 at Getafe and escaped the relegation zone.