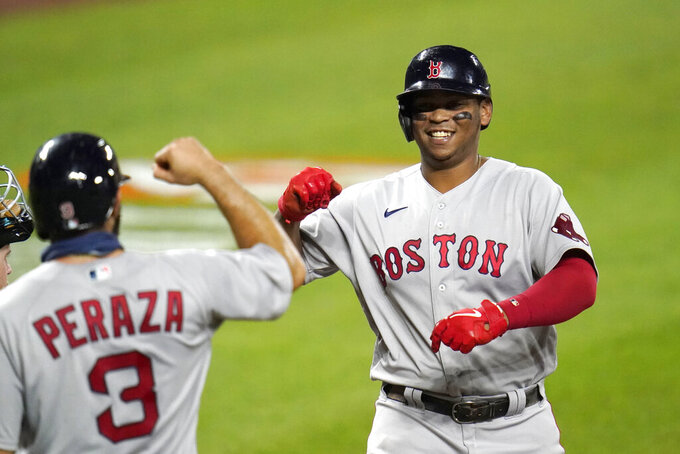 Bogaerts hit a solo shot off John Means (0-2) in the second inning and Martinez connected for a two-run homer in the third. Rafael Devers added a three-run drive to make 6-0 in the fifth, and the Red Sox coasted to the finish.

During the game, Boston announced it traded relievers Brandon Workman, Heath Hembree and cash considerations to Philadelphia for right-handers Nick Pivetta and Connor Seabold. In a lost season shortened by COVID-19, the rebuilding Red Sox were willing to deal two nig league relievers for potential future cogs in the rotation.

Ironically, Boston won on this night with a “bullpen game," using reliever Colten Brewer as the opener. Darwinzon Hernandez (1-0) and two others followed before Matt Barnes came in to get the final three outs — a role previously filled by Workman — and earn his first save .

Boston's modest three-game run comes on the heels of a nine-game losing streak. Despite their recent success, the Red Sox (9-18) remain in last place in the AL East, although they're making up ground quickly on the skidding Orioles.

Baltimore (12-14) has been outscored 41-22 during a six-game skid while playing at home against three sub-.500 teams — Washington, Toronto and Boston.

After the Red Sox went up 8-0, Pat Valaika and Cedric Mullins hit seventh-inning homers for the Orioles and Chance Sisco went deep with two on in the eighth.

Anthony Santander extended his hitting streak to a career-high 16 games for Baltimore and prized prospect Ryan Mountcastle played left field and went 0 for 2 with two walks in his major league debut.

Means allowed three runs in three innings as he continues to struggle following a rookie year in which he was the Orioles' lone representative in the All-Star Game. After getting a late start because of arm fatigue and then dealing with the death of his father, the left-hander owns an unsightly 10.13 ERA over four starts.

RUST ON, RUST OFF

“The beginning of the season was really like the end of my spring training," he said. “I was trying to shake off a lot of rust. My timing was off."

Not anymore. Vedugo is hitting .319 during his 12-game streak and his batting average now stands at .292.

Orioles: 1B Chris Davis was placed on the 10-day injured list with left knee patellar tendinitis. Manager Brandon Hyde said Davis brought up the issue earlier in the week, and the team decided to give the slumping slugger some time off. Davis is batting .121 with 1 RBI.

Red Sox: Martín Pérez (2-3, 4.07 ERA) faces the Orioles for the second time this season on Saturday night. The lefty gave up five runs in five innings during a 7-2 loss on July 25.