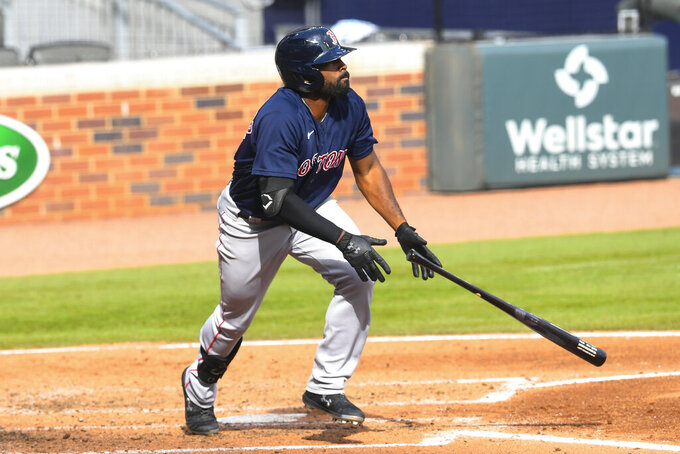 BOSTON (AP) — The manager won’t be back, and there could be more changes for the Boston Red Sox after their last-place finish in the pandemic-shortened season.

J.D. Martinez is eligible to opt out of his contract, Jackie Bradley Jr. is a free agent, and the pitching rotation and bullpen were revealed by the unusual year to be in shambles. The team also needs to replace Ron Roenicke, who was told before the season finale that he's not in their plans.

Chief Baseball Officer Chaim Bloom will need to deal with these issues; he hopes to have a more normal offseason to do it (Last year, he landed in the middle of a cheating investigation that cost the team manager Alex Cora, and a mandate to cut salary that cost the Red Sox Mookie Betts and David Price -- even before the coronavirus shut down spring training).

Here is a look at some of the items on Bloom’s to-do list:

With Cora tainted by the Astros cheating investigation and spring training less than a month away, Bloom’s options were limited in the rushed job search and Roenicke, already the bench coach, was the best hope for some semblance of continuity.

Now they can get that from Cora.

Nothing in the team’s comments has ever ruled out a return. When they cut ties with him, they praised him effusively but said he couldn’t be effective. When Cora was cleared of wrongdoing during his Red Sox tenure, Bloom said, “All the reasons that we parted ways with him then are still the case.”

But are they still?

Bloom flatly declined to say so on Sunday, repeating that “I don’t want to say anything about Alex that I haven’t already said to Alex.” Bloom also said this: “I thought that Ron deserved to be evaluated without anybody looking over his shoulder.”

Red Sox owner John Henry, chairman Tom Werner and President Sam Kennedy all spoke fondly of Cora, even as they let him go in January. Until they say rule it out, the speculation will continue.

After making the All-Star team in his first two seasons in Boston, Martinez never got going and finished with a .213 average and power numbers (7 HR, 27 RBIs) that -- even pro-rated over a normal season -- rank among the worst of his career.

He can opt out of the contract that would pay him $19.35 million next season, but he has already conceded it’s not a good time to be a free agent, with the baseball economy depressed from an abbreviated, attendance-free season.

Bradley is eligible to become a free agent for the first time. His spectacular defense has helped the team forget streaky batting that has still come out as a .239 average with 18 homers and 70 RBIs over for a 162-game season.

Alex Verdugo (.308, 6 HR, 15 RBIs), who was acquired in the deal that sent Betts and David Price to the Dodgers, gives Boston a building block; he isn't eligible for free agency until 2025.

The Red Sox have a $6.25 million option on lefty starter Martin Perez and seem likely to exercise it.

By the end of the 2021 season, the Red Sox might boast a formidable rotation of Chris Sale, Eduardo Rodriguez, Nathan Eovaldi, Perez and one of the two young righties who showed promise this season, Nick Pivetta and Tanner Houck.

But heading into the season, it’s all question marks.

Sale had Tommy John surgery in March. Rodriguez didn’t throw a pitch this season, either, developing myocarditis after contracting COVID-19. Eovaldi last made it through an injury-free season in 2014. Perez was the team’s most reliable pitcher this year, but his 3-5 record and 4.50 ERA were hardly the stuff of an ace.

After the team’s final game on Sunday, Roenicke said he wasn’t ready to think about his plans for the future. The 64-year-old baseball lifer popularly called Rags, who played eight years with six major league teams and has essentially been in one dugout or another since he was drafted in 1977, said he isn't ready to leave the game.

“I don’t want to say that I’m definitely going to work,” he told reporters. “I still think I have a lot to offer. I still enjoy it a lot. I look and see what’s there.”