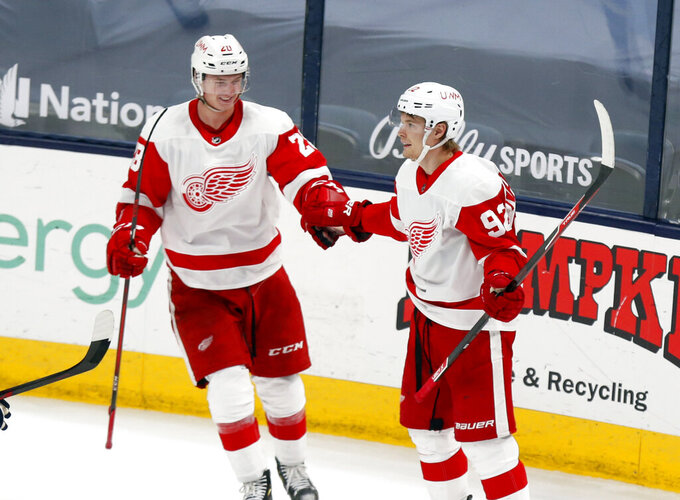 The Detroit Red Wings have not had enough good players to consistently win in recent years, making the man behind their bench relatively moot.

Due in part to that fact, the Red Wings are sticking with coach Jeff Blashill for their rebuild. General manager Steve Yzerman made the announcement Tuesday, giving Blashill a contract extension despite a five-year postseason drought and a career record of 172-221-62.

“It’s hard to coach a rebuilding team," Yzerman said on a Zoom call with reporters.

Yzerman said assistant coach Dan Bylsma, who led Pittsburgh to the 2009 Stanley Cup and was later Buffalo's coach, is leaving to pursue other jobs in the league for next season.

“In his heart, he’s a head coach and he wants to be a head coach," Yzerman said. “That’s the biggest reason for him leaving."

Two years ago, Yzerman returned to Detroit as a former Hall of Fame player with the goal of rebuilding the franchise into one of the NHL's best. One of his first decisions was to retain Blashill, who had two years left on his contract.

Blashill's sixth season behind the bench ended May 8 with an overtime loss to Columbus and both teams finished with a Central Division-low 48 points in the pandemic-shortened season.

“We’ve been through tough times and to get a chance to continue to lead this team is something I’m grateful for," Blashill said. “I’m aware of where we have been the last number of years and I want to get us back to a much better spot."

The Red Wings earned a point in 43% of their games this year, a season after easily having the NHL's worst record and one of the worst marks in team history.

“Our players play hard and that’s a reflection of the coaching staff," Yzerman said.

Blashill helped Detroit extend its postseason streak to 25 in 2016, his first season as a head coach in the league. He was put in a difficult position to win in the subsequent years because the franchise failed to have a pipeline of prospects good enough to produce and didn't want to waste money on expensive veterans during a rebuilding phase.

“It’s important to have a coach that has a calmness and a willingness and patience to have these younger players go through the growing paints of playing in the NHL," Yzerman said.

The Red Wings' postseason drought is their longest since 1979-83.

Yzerman acknowledged he could've decided to have a new coach, but said that wouldn't matter if the team doesn't improve.

“If we don’t have good players, it’s not going to change," he said.

Jakub Vrana had 11 points in 11 games with the Red Wings, who acquired him in a trade with Washington. Signing the restricted free agent will be a top priority. Yzerman added the powerful winger, journeyman forward Richard Panik, a 2021 first- and a 2022 second-round pick in exchange for 26-year-old forward Anthony Mantha in a deal that should help Detroit now and later.

Detroit was much more competitive game to game, and throughout the season, than it was the previous season in large part because goaltender Jonathan Bernier gave the offensively challenged team a shot to win in most of his starts.

Bernier was 9-11-1 for team that won just 10 times without him during the 56-game schedule. The Red Wings would love to have the 32-year-old Bernier back, but he will probably have choices to join better teams as an unrestricted free agent.

Dylan Larkin has two years left on his contract $30.5 million, five-year contract. The franchise desperately needs the team captain and top center to bounce back and provide more of a return on its investment next season.

Larkin’s disappointing season ended in April with an upper-body injury. He had just nine goals and 14 assists in 44 games for his second straight lackluster season.

“His leadership, work ethic and determination are very important even when the numbers aren’t there," Yzerman said.

Detroit hopes Larkin can return to the form he had two seasons ago when he had career highs with 32 goals and 73 points.

Yzerman may have a tough decision to make regarding restricted free agent Tyler Bertuzzi, whose season was shortened to nine games because of a back injury that led to him having surgery in early May.

Bertuzzi was awarded a one-year, $3.5 million contract this year by an arbitrator. The team wants Bertuzzi back at the right price, banking on him getting and staying healthy to approach being a 50-point scorer as he was the previous two seasons.

The Red Wings have stockpiled selections, giving them more than 20 picks this year and in 2022. They have a pair of first-round slots this year, three in the second round and two in each of the third, fourth and fifth rounds in July.