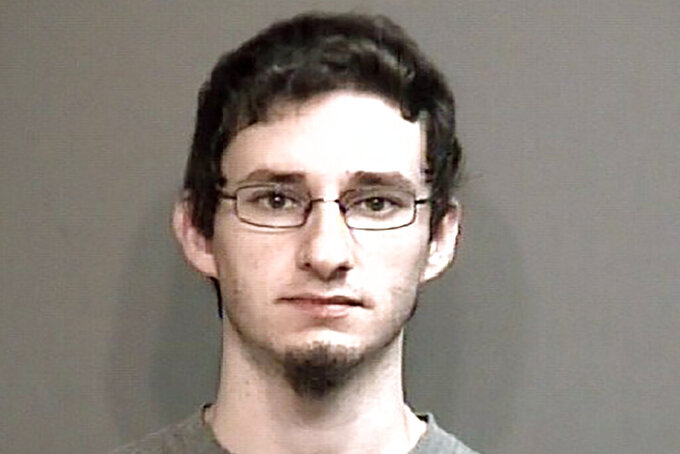 FILE - This undated file photo provided by the Boone County Sheriff's Department in Columbia, Mo., shows Joseph Elledge. Authorities say they have discovered human remains that they believe are the body of Elledge's wife, Mengqi Ji Elledge, who has been missing since October 2019. The remains were found Thursday, March 25, 2021, in Rock Bridge State Park in Boone County in mid Missouri. Joseph Elledge was charged in February with first-degree murder in connection with his wife's disappearance. He has pleaded not guilty and is jailed without bond. (Boone County Sheriff's Department via AP, File)

LIBERTY, Mo. (AP) — Decomposed remains found in a Missouri park have been positively identified as those of a Chinese woman who had been missing from Columbia, Missouri, since 2019, authorities said Tuesday.

“I want to express to Mengqi Ji’s family members, and to their community of supporters, that we support you and your wish for justice,” Treece said.

It's also unclear how long her body had been at the site but it had been there “for some time,” Police Chief Geoff Jones said.

Current evidence does not indicate other suspects but Jones said investigators were “keeping an open mind” and would go where the evidence took them.

Prosecutors have speculated that Elledge strangled his wife to avoid a costly divorce and to stop her from fleeing to China with their daughter.

Boone County Prosecutor Dan Knight has said little since the remains were found but Jones said Knight is as confident as he was a year ago that Ji’s husband is responsible for her death.

“I think we're closer to the truth than we've ever been, and I hope we can get there for her family," Jones said.

Authorities said when the remains were found that they believed they were Ji's. Hunter said authorities were notified of the positive identification late Friday afternoon but waited to release details until they could talk to Ji's family early Tuesday.

The family's attorney, Amy Salladay, said in a statement Tuesday that they took comfort in having closure with respect to what happened to their daughter. And they are grateful to the hunter who found the body, she said.

She said domestic violence incidents and anti-Asian harassment and violence have been underreported because of the coronavirus pandemic and she urged Columbia to begin discussing the intersection between domestic violence and racism.

“Xenophobia isn’t new but this is a pivotal moment where Columbia should choose to take specific, measurable actions to make sure everyone is safe.” she said.

During the news conference, Jones thanked those who came forward in Ji's case and urged them to continue offering information in other cases of violent crime.