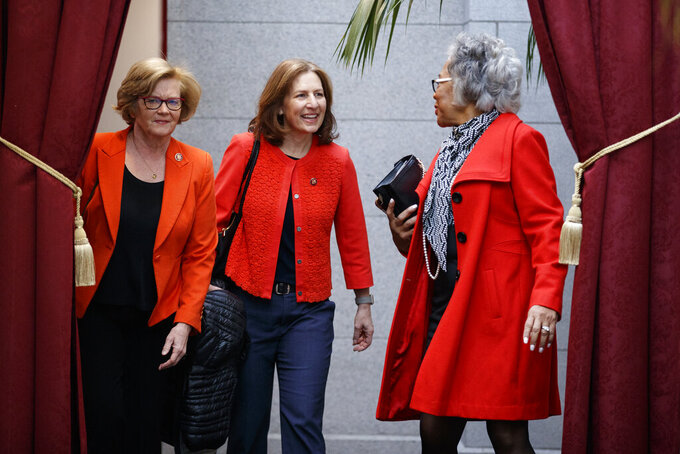 FILE - In this Jan. 4, 2019, file photo, from left, Rep. Chellie Pingree, D-Maine, Rep. Kim Schrier, D-Wash., and Rep. Joyce Beatty, D-Ohio, walk to a closed Democratic Caucus meeting on Capitol Hill in Washington. Schrier is trying to hold onto her seat after becoming the first Democrat to represent Washington's 8th Congressional District since it was founded in the early 1980s. Schrier faces Republican newcomer Jesse Jensen, an Army veteran from Bonney Lake who did four combat tours in Afghanistan. (AP Photo/Carolyn Kaster, File)

SEATTLE (AP) — Two years ago, Ted Alway voted for Democrat Kim Schrier in Washington’s 8th Congressional District because he liked her views on health care and the environment. The Wenatchee Valley pear grower was less sure how Schrier would be on another issue important to him: agriculture.

As the only Northwest lawmaker on the House Agriculture Committee, Schrier has frequently worked with Republicans, Alway said. That includes helping land federal research dollars for crops like the fruit he's grown for the past 40 years and trying to improve the visa program for immigrant farmworkers. Amid the COVID-19 pandemic, she has worked to give people on food stamps extra credit to buy fruit and vegetables, and to help family farms that normally supply restaurants get their produce to food banks instead.

“She’s shown that she can work across the aisle, and she’s delivered for ag,” said Alway, who said he often votes Democratic for president but Republican in local contests. “She's a moderate.”

The former program manager at Amazon and Microsoft has tried to paint Schrier as a far-left, Seattle-style liberal, saying her voting record matches that of the Democratic speaker of the House, Nancy Pelosi, and is out of touch with a “purple” district that envelopes both Seattle suburbs and Central Washington farmland.

After an expensive, close 2018 campaign, Schrier, a pediatrician, became the first Democrat to represent the district since it was created in the early 1980s. She is in for a tough re-election fight. Republicans who ran in the primary collectively took 49.2% to the Democrats’ 47.6%. Schrier’s 43% showing was the weakest among the state’s congressional incumbents.

The National Republican Congressional Committee recently upgraded Jensen’s campaign to “contender” status. Jensen said his fundraising has picked up since July, when he reported having raised just $192,000, though he did not provide an updated total.

Schrier, who has reported raising $4.7 million, is banking on much bigger Democratic turnout in November to carry her into a second term.

“I feel very confident in the work I’ve done for this district – I’ve had 58 town halls, and I’ve been partnering with farmers in the parts of my district that are the most red, and I’ve really dived in and worked with all the mayors,” Schrier said in a recent interview. “Now it’s a matter of making sure the 750,000 people who I represent know that.”

Jensen, 37, of Bonney Lake, hasn’t run for office before, but he spent two years as an executive assistant to one of his home-state senators, South Dakota Republican John Thune. On a visit with Thune to Walter Reed Army Medical Center in 2007, Jensen met an Iraq war veteran who lost his legs to an improvised explosive device. A conversation with the vet inspired him to enlist.

The son of a pastor and stay-at-home mother, he spent seven years in the Army, earning the rank of captain and two Bronze Stars during four combat tours in Afghanistan. He has since worked for Microsoft and Amazon as well as serving as the regional operations director for a kidney dialysis company.

The suicide of an Army friend in 2019 persuaded him to run for office, he said.

“From day one in the military and day one of my career, no one asked me if I was a Republican or Democrat,” Jensen said. “They just told me to go take that hill, get the bad guy off the field or increase the bottom line, and I did it. That’s what I hope to do in Congress.”

Jensen said he’s a Republican because he believes “free markets do things better,” he's religious, and he favors cutting regulations and taxes. He has cautioned against defunding police and warned in one recent campaign ad that rioting in Seattle and Portland could spread to suburban neighborhoods.

Jensen supports President Donald Trump, who questions the science demonstrating the human role in climate change and who has pulled the U.S. out of international efforts to protect the planet. But Jensen also noted that he has climbed Mount Rainier three times: “I want the glacier to be there for my kids’ grandkids when they’re old enough to climb.”

He said he wants the GOP to take a stronger stance on environmental issues, and he said he wants to ease the export of modular nuclear energy technology to countries like India and China that rely heavily on coal.

Jensen’s attacks on Schrier have largely accused her of being too partisan. He has repeatedly insisted Schrier “gave her proxy vote to Nancy Pelosi” when Pelosi allowed remote voting due to the pandemic; in reality, Schrier gave her proxy vote to fellow Washington state Democratic Rep. Derek Kilmer, and she instructed him how to cast her vote each of the six times she voted by proxy, her campaign said.

Asked to explain that inaccuracy, Jensen’s campaign responded with an email saying, “In essence, there is no difference between Kilmer and Pelosi.”

Jensen criticized Schrier for voting to cut the Justice Department’s Byrne Criminal Justice Assistance Grant program, which gives money to state and local police, by $22 million, which he called a vote to “jeopardize community safety and make it easier for drug dealers, child and sex traffickers, and other criminals to break the law.” Schrier did vote for that cut, but also to significantly increase funding for other federal aid to state and local police, including for training under the George Floyd Justice in Policing Act.

Schrier, 52, has expressed concern about people hijacking peaceful protests to commit acts of violence, but said hype about rioting distracts from reforms needed to create a more equitable justice system. She said accusations she's too partisan contradict her record, noting that in addition to working with Republicans from Washington state on agriculture, she worked with Tea Party Republican Rep. Michael Burgess of Texas — who is also a doctor — on a measure to combat misinformation about vaccines.

She wants another term to keep working on some of her top priorities, she said: protecting people with pre-existing conditions, bringing down the cost of health care and prescription drugs, promoting gun safety, and reversing the damage Trump's presidency has done to U.S. democracy.

One thing she’d change in a second term, Schrier said, would be to socialize more with other members of Congress, Republican and Democrat alike.

“I think that is how in our very divided time we find humanity in one another,” she said.