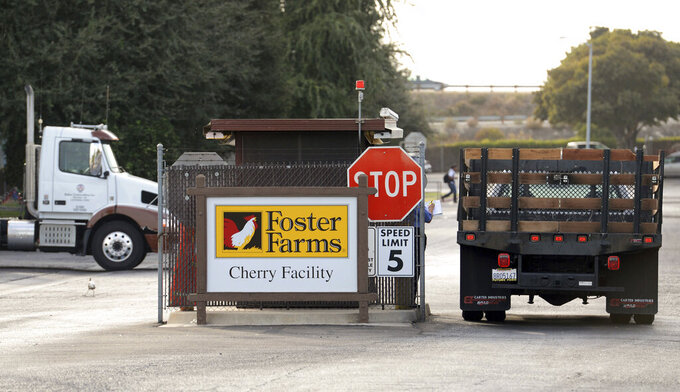 FILE - In this Oct. 8, 2013, file photo, is an entryway into a Foster Farms chicken plant in Fresno, Calif. Local health officials gave a heads-up to a California chicken processing plant about a state inspection during the largest known COVID-19 workplace outbreak in Fresno County, The Fresno Bee reported, Wednesday, March 17, 2021, citing emails obtained through the Public Records Act. Hundreds were infected in the outbreak late last year at a Foster Farms plant in Fresno and at least five workers have died. (AP Photo/The Fresno Bee, Craig Kohlruss)

Health officials also discussed media talking points during the crisis, withheld information from the public and issued no coronavirus-related corrective actions, the newspaper reported in a story published online Wednesday.

Hundreds were infected in the outbreak late last year at the Foster Farms plant in southeast Fresno and at least five workers have died.

The Bee said county health officials defended their relationship with local businesses, saying their role is to help companies curb the virus while leaving regulation to agencies like the California Division of Occupational Safety and Health, better known as Cal/OSHA.

“What we do is quite different,” said Tom Fuller, an environmental health specialist at the Fresno County Department of Health.

Fuller showed up at the plant for an unannounced inspection before the November outbreak. He told the Bee that many of the executives and engineers he needed to speak to were not present and those who were there were crowded into a small room.

Fuller said that when the county began getting calls about the outbreak in late November he gave the company advance notice of another inspection in order to observe safety precautions so that relevant people would be present.

Fuller also notified Foster Farms in a Dec. 8 email that Cal/OSHA would be at the appointment due to hospitalization reports.

The state agency was not aware that the county gave advance notice of the inspection, Cal/OSHA public information officer Erika Monterroza said.

The Bee said emails show that county officials twice told Foster Farms executives that media outlets were pressing for more data and they asked the executives to share more information.

A company official replied that he wanted see how events developed before sharing more information, and would only speak “with members of media that are reasonable in their past coverage.” At one point the official asked for a call to discuss media protocol and a county information officer replied that they were offering media a “generic” response.

County Health Department Director David Pomaville told the newspaper that the state has more regulatory tools inside a work environment and that the correspondence about media coverage with Foster Farms was not unprofessional or unusual.

“We’ve done this with other situations where we’re trying to understand what’s going to be communicated, but I don’t view that as cozy,” he said. “We have independent decision-making and discretion.”

Pomaville also praised Foster Farms' testing strategy as a model for the county.

Fresno County Administrative Officer Jean Rousseau said in a statement that “our Public Health Department has taken a collaborative, not a heavy handed, approach in working with businesses to employ best practices to protect their employees from the virus.”

Rousseau said the testing regimen used by Foster Farms at the plant was welcomed as proactively protecting its employees.

“Any allegation of collusion or abrogation of our duties under the law are absolutely false and grossly misrepresents our heroic efforts in responding to the COVID-19 pandemic,” Rousseau said.