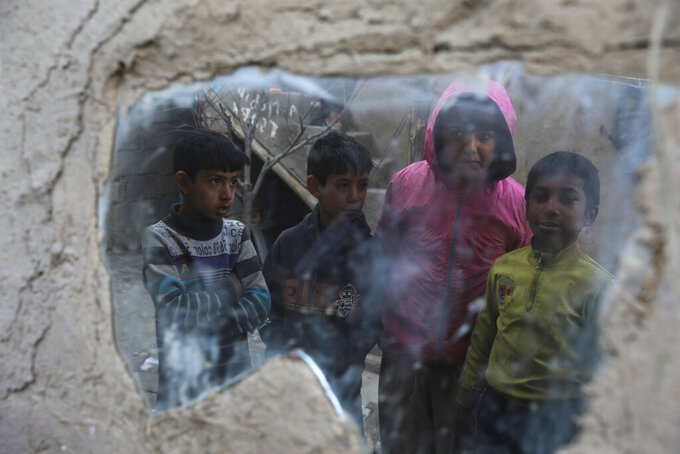 Internally displaced boys are reflected in a mirror inside their temporary home in the city of Kabul, Afghanistan, Wednesday, Dec. 30, 2020. Save the Children has warned that more than 300,000 Afghan children face freezing winter conditions that could lead to illness, in the worst cases death, without proper winter clothing and heating. (AP Photo/Rahmat Gul)

The ongoing military conflict in Afghanistan has destroyed many homes and forced thousands of children to shelter in camps for the homeless. There they are at risk of not only hunger and disease, including COVID-19, but also death from freezing temperatures.

Chris Nyamandi, Afghanistan country director for Save the Children, said in a statement Thursday that early snow in northern Afghanistan has impacted children particularly badly.

“The most vulnerable children are those whose schools have shut because of the worsening winter conditions," he said. “Their families don’t have the money to buy winter clothing. Instead children are forced to huddle at home to escape the bitter cold.”

Schools are closed until March in the coldest parts of Afghanistan, where the temperature can plummet to as low as minus 27 degrees Celsius (minus 16 degrees Fahrenheit).

Save the Children has provided winter kits to more than 100,000 families in 12 of Afghanistan’s 34 provinces. The kits include fuel and a heater, blankets and winter clothes for children including coats, socks, shoes, hats.

“The situation is bleak for children forced to live in camps in places like Balkh province. It is already very cold in this northern province with overnight temperatures as low as minus ten. But it will get much colder before March,” Nyamandi said. “For thousands of children the Afghan winter is a time of grim survival.”

Violence has been on the upswing in Afghanistan even as Taliban and Afghan government negotiators hold talks in Qatar, trying to hammer out a peace deal that could put an end to decades of war.

A report from Save the Children released Thursday cites 12-year-old Rohina, who lives in a camp for people forced to flee their homes in northern Balkh province. She attends Save the Children supported, community-based education classes.

“We are poor and are living under open sky," she said. “Me and my siblings are not able to sleep for the night because of the cold. How can someone learn like this?”

At a camp in the northern part of the capital Kabul, there are more than 700 families, the majority of them displaced by violence in their hometowns. They and other families keep warm and cook by burning the garbage that surrounds them.

“It is cold at night, cold in morning, we don't have wood, we don't have charcoal," said 10-year-old Mohammad Dad, who lives at the camp. “We don't have blankets we make fire out of plastic to keep us warm.”

Mohammad's grandmother, 50-year-old Raihan, lives with seven members of her son's family at the camp. She said the fires they make from discarded plastic does little to keep them warm.

“The children are sick, from night till morning they are coughing,” she said.