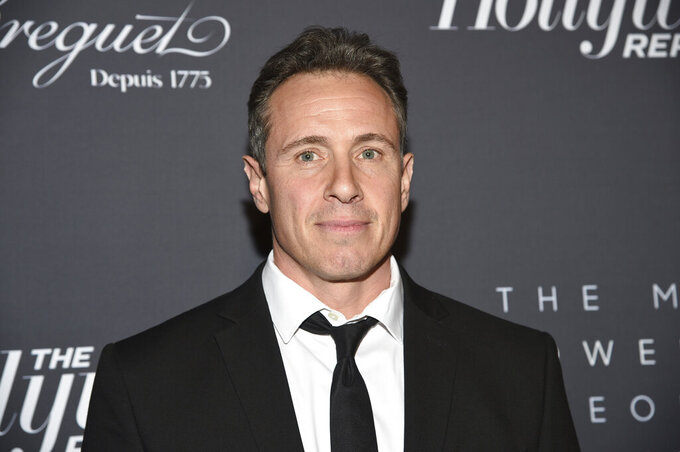 FILE - Chris Cuomo attends The Hollywood Reporter's annual Most Powerful People in Media cocktail reception on April 11, 2019, in New York. Cuomo emerged as a central figure in the latest damaging stories about his older brother, New York Gov. Andrew Cuomo. According to published reports, Cuomo family members, including Chris, got special treatment a year ago when it came to COVID testing. (Photo by Evan Agostini/Invision/AP, File)

NEW YORK (AP) — Having a brother for governor is no longer the benefit it once seemed for CNN's Chris Cuomo.

The news anchor emerged Thursday as a central figure in the latest damaging stories about his older brother, New York Gov. Andrew Cuomo, who allegedly gave special treatment to family members and friends during the early days of the pandemic a year ago.

An aide to New York's health commissioner reportedly administered a COVID-19 test to Chris Cuomo at his Long Island home last March and rushed it to a state laboratory for processing, according to published reports in the Albany Times-Union and The New York Times.

Chris Cuomo contracted COVID-19 last year and anchored his “Cuomo Prime Time” show while quarantined in the basement of his home.

Several times, the governor was a guest on his brother's show for mostly light banter that entertained viewers at the time but now seems ethically suspect as questions emerge about Andrew Cuomo's actions during the coronavirus. CNN no longer allows Andrew Cuomo to be a guest on Chris' show.

CNN said in a statement that it was “not surprising that in the earliest days of a once-in-a-century global pandemic, when Chris was showing symptoms and was concerned about possible spread, he turned to anyone he could for advice and assistance, as any human being would.”

In the early days of the pandemic, when there was a heavy emphasis on contract tracing, the administration went above and beyond to get people tested, said Rich Azzopardi, a spokesman for the governor.

“Among those we assisted were members of the general public, including legislators, reporters, state workers and their families who feared they had contracted the virus and had the capability to further spread it,” he said.

During one of their on-air conversations last year, Andrew Cuomo noted that he was glad their 89-year-old mother, Matilda, had not moved in with his brother's family.

For Chris Cuomo, the revelation is “grotesque and damaging to CNN's brand,” journalist Glenn Greenwald wrote on Thursday.

“He was the beneficiary of exactly the kind of abuse of power that journalists, at least in theory, exist to expose,” Greenwald said.

While COVID-19 testing became much more available as 2020 went on, it wasn't as easy to find in those early days.

Chris Cuomo is off this week but expected back on his show next Monday.