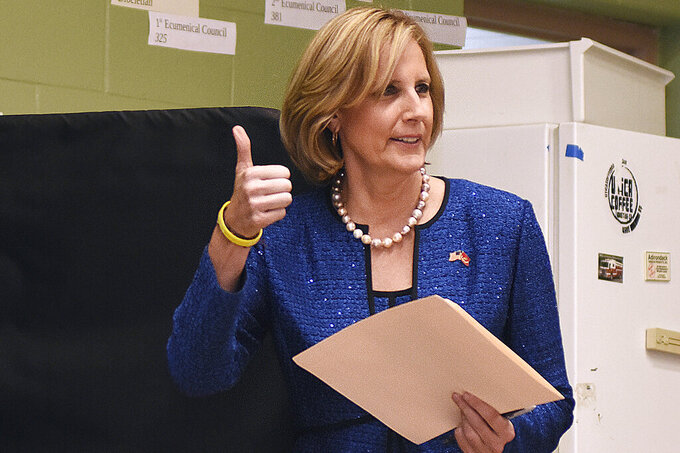 Tenney, a central New York Republican, began the day with a 122-vote lead over U.S. Rep. Anthony Brindisi, according to unofficial vote totals from both campaigns. Brindisi was the Democrat who ousted Tenney from office in 2018.

A last round of ballot counting done before a state judge Monday only involved 54 ballots — not enough to shake Tenney’s small lead.

Still, the final, official tally may yet be days away.

Brindisi still has legal challenges pending with a state appeals court. By Monday evening, the judge had paused the certification of results in one county, Oneida, a step initially planned for Tuesday.

Oswego County Supreme Court Judge Scott DelConte said he wanted to to give lawyers for the campaigns more time to weigh in on what would happen if Tenney were declared the winner and sworn in, only to have an appeals court reverse the results later.

The order followed an hourslong court session in which elections officials and campaign lawyers huddled around a square table in the Oswego County Courthouse as 54 ballots were counted. Mask-wearing lawyers for the candidates peered at the ballots and took notes as an official opened up ballots and held them up for all to see.

Public access to the courtroom was restricted because of the coronavirus pandemic. While the proceedings were streamed to computer terminals in other courtrooms around the state, it was often unclear which votes went to which candidates. Election officials and lawyers muffled by masks discussed some results and not others.

In a brief tweet, Tenney said her lead had expanded by four more votes.

Brindisi's campaign said it would fight on.

“The margin in this case has been a moving target for nearly three months, but even now, with the margin as large as it has ever been, it is still infinitesimally small,” Brindisi's campaign said in a court filing Monday.

The campaign asked Monday for an audit to help determine whether there should be a recount of all 325,000 ballots, though it wasn’t clear whether there were legal grounds for such a motion to be granted.

DelConte, the judge overseeing litigation in the race, said Friday the court can’t order a new election or direct a recount. Such recounts, even when granted, rarely change election results.

Tenney has maintained a small lead in the race even as months of litigation revealed problems with ballots that either weren't counted properly, or were improperly rejected.

The race is the nation's most drawn out federal contest this year and is among the closest Congressional races in the past two decades. In December, Iowa Democrat Rita Hart asked the U.S. House to investigate and overturn the race that Iowa says she lost to Republican Mariannette Miller-Meeks by six votes.

Brindisi's attorneys are now challenging the accuracy of machine counts of votes in the election, pointing to what they said were small discrepancies between hand counts of ballots done by election officials' and counts done by automated scanners.

“In this case, there is reason to believe that voting tabulation machines misread hundreds if not thousands of valid votes as undervotes, and that these tabulation machine errors disproportionately affected Brindisi,” the candidate's lawyers said in Monday filings.

Leo Glickman, an election lawyer who isn't involved in the dispute, said ballot scanners are accurate in general.

“It’s rare to see a major discrepancy,” he said. “Every now and then you might see one just because of the way a voter colored in a ballot.”

A new state law will trigger an automatic recount by hand when a race's margin is less than 0.5%, but that law didn't take effect until January.