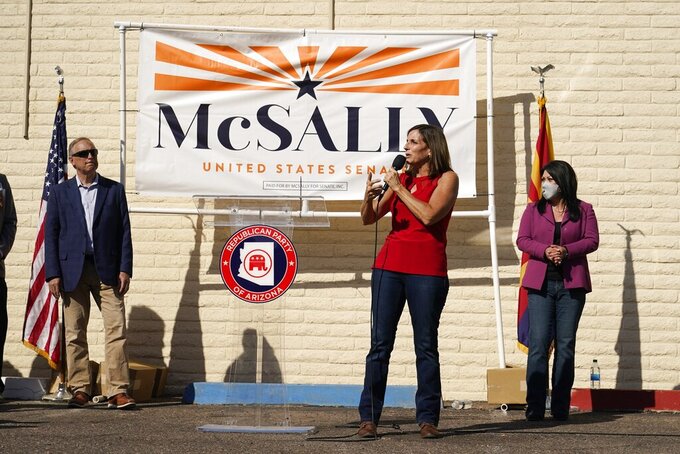 PHOENIX (AP) — Republican Sen. Martha McSally and other GOP candidates barnstormed the state Monday as they worked to get out their voters with their traditional election eve rallies. Democrats, meanwhile, focused on campaigning at a distance as they have throughout the pandemic with digital messaging, phone banks and walking neighborhoods to motivate their backers to go to the polls.

Arizona Republicans are playing defense up and down Tuesday’s ballot as they try to beat back Democratic efforts to win not only the state’s presidential vote but a U.S. Senate seat, control of the state Legislature and the commission that regulates utilities.

Add two ballot measures backed by progressives that strike at the heart of the GOP’s low-tax, tough-on-crime mantra and there’s a risk that Republicans who have controlled the state’s levers of power for a decade could find themselves with only the governor’s office as the backstop to Democrats’ goals.

Felecia Rotellini, chair of the Arizona Democratic Party, said Monday that she thinks the state is critical in the presidential race and is confident their voters will turn out. She also said the party's polling shows they can wrest away control of the state Legislature from Republicans who have controlled it for decades.

Democratic candidates are focusing on health care and public education as two major issues that will drive out the vote. For legislative races, funding for K-12 schools is key.

“That is one of the top issues in Arizona, and the Republican Legislature has truly abandoned our public education system and our teachers, from our infrastructure to our salaries,” Rotellini said. “That is an issue that has incensed parents, and they realized after so many cycles that the only way to make sure we have a strong public education system in Arizona is to elect Democrats that will fight for it.”

State Republican Party Chair Dr. Kelli Ward said after a stop in Phoenix with McSally and other candidates that GOP candidates may be playing defense but that’s only because they are in office.

“Obviously if you’re in the position of power you have to defend your position,” she said. “But I would say that we definitely are playing to win.”

Ward noted that the GOP has almost made up an early deficit in early ballot returns and she believes her party will prevail up and down the ballot. She noted that in addition to Monday's rallies across the state, the state Republican Party has a robust get-out-the-vote effort through phone calls, digital outreach and social media.

Republicans were set to end their day on the courthouse steps in Prescott, the spot where GOP candidates such as the late Sens. Barry Goldwater and John McCain traditionally ended their campaigns.

The top of the ballot in Arizona contains the race between Republican President Donald Trump and former Vice President Joe Biden, the Democrat seeking to unseat him. Polls show an extremely tight Arizona race, with Biden up only slightly over Trump but within the margin of error. If Biden pulls out a win, he will be the first Democrat to take the state since Bill Clinton in 1996.

The race to fill out the remainder of the late Sen. John McCain's term pits McSally against Democrat Mark Kelly, and polls have consistently shown Kelly with a lead.

“Chuck Schumer thinks Arizona is his path to power," McSally said of the Senate Democratic leader. "He’s gonna have to pry that Senate majority out of my cold dead hands.”

She spoke to reporters after rallying several dozen supporters outside the state GOP headquarters at the tail end of her final two-day sprint. She flew to 11 cities all over the state on Sunday and Monday, closing each time by singing God Bless America.

Kelly spoke about the coronavirus to supporters outside a Democratic office in Tucson alongside his wife, former U.S. Rep. Gabrielle Giffords, who survived a gunshot wound to the head.

“You have to stop dismissing the science on this issue and so many issues,” Kelly said. “It’s so important that we pay attention to the science and the data and the facts.”

Other major issues include two ballot measures: one to legalize recreational use of marijuana and another to raise taxes on high-earning Arizonans to increase school funding.

The makeup of the state's U.S. House delegation is also on the line, with all nine incumbents facing challenges. Only a couple of those races are likely to be tight, with Democrats aiming to topple Rep. David Schweikert in the 6th District and Republicans hoping to defeat Rep. Tom O'Halleran in the 1st District. The delegation currently has five Democrats and two Republicans.

Rotellini says Democrats have a real shot at knocking off Schweikert and is confident that O'Halleran can pull off a win. Ward said Schweikert is safe.

Of greater impact to the state itself is the effort by Democrats to grab control of the state House and Senate for the first time in decades. Republicans currently have a 31-29 majority in the House and a 17-13 split in the Senate. If Democrats take control of one or both chambers. it will crimp Republicans' longtime control of the state's legislative direction and put pressure on GOP Gov. Doug Ducey's low-tax, pro-business agenda.

Statewide turnout is already high, with nearly 62% of voters already casting their ballots either by mail or in-person as of Monday morning, according to a tally from the Arizona Secretary of State's office. That's 2.6 million ballots returned out of 4.3 million registered voters. In the 2016 presidential election, 74% of voters cast ballots.