Resurgent Bills narrow in on 1st AFC East title since 1995 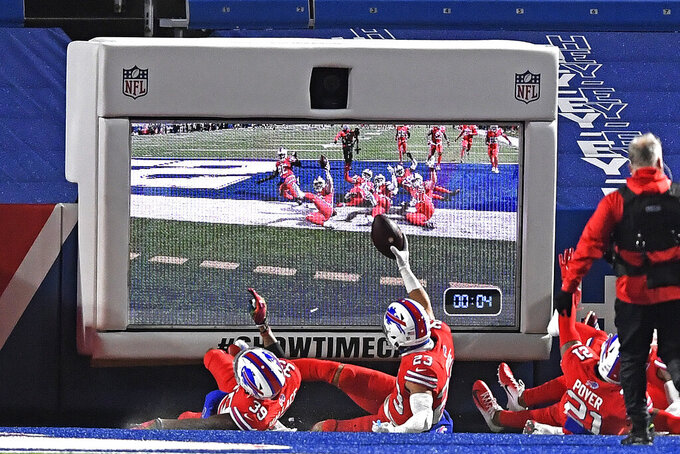 ORCHARD PARK, N.Y. (AP) — Brandon Beane could have easily stayed in Carolina, where he spent 19 years working his way up the Panthers’ front-office ranks, if only because it felt comfortable and safe.

Instead, he took the riskier option by gambling on himself in May 2017, and placing faith in the assurances made by owners Terry and Kim Pegula to accept the challenge of helping resuscitate a losing franchise.

“This was an opportunity in a place that’s been down for so long that had such a great tradition,” Beane said last week upon signing a four-year contract extension as general manager that locks him up through 2025.

“How exciting would it be to get this thing turned around and host playoff games here?” he added. “That’s been the goal all along. And I think at the end of the day, hopefully, we can get that done this year.”

What appeared unimaginable in January 2017— when the Bills were in the midst of yet another regime change following coach Rex Ryan’s dismissal and GM Doug Whaley’s end-of-season press conference in which he claimed to know little of what was going on — seems suddenly attainable.

Under Beane's and coach Sean McDermott’s patiently driven vision to build stability and sustainable success in Buffalo, the Bills (10-3) are in position to clinch their third playoff berth in four years and, more emphatically, claim their first AFC East title since 1995.

Break out the Bills' Zubaz pants, and order a round of beer and wings, because Buffalo is prepping for a party — socially distanced, mind you — it’s not enjoyed since the first Clinton Administration. The Bills’ magic number to clinch the division is down to one — a win or a Miami Dolphins loss — with three weeks remaining.

The mood in Buffalo is electric.

Even though fans aren't allowed to attend home games because of the coronavirus pandemic, it didn’t prevent a small contingent to gather at the stadium's street entrance in the wee hours of Monday morning to cheer on every car that exited following Buffalo’s convincing 26-15 win over the Pittsburgh Steelers.

These, of course, are the same faithful fans who braved sub-zero degree temperatures on Dec. 31, 2017, to greet the Bills’ arrival from Miami after clinching a playoff berth to end a 17-year postseason drought.

The 2020 Bills are a much more complete team in having been rebuilt through the draft and free agency. They're led by third-year quarterback in Josh Allen who is challenging a number of Hall of Famer Jim Kelly’s single-season passing and scoring records, and feature a defense suddenly flexing an attacking identity.

Both were in evidence against the Steelers, beginning with the defense enjoying its best outing of the year.

Safety Taron Johnson scored on a momentum-turning 51-yard interception return to put the Bills up 9-7 in the final minute of the first half. And cornerback Levi Wallace ensured the lead would hold up by ending the Steelers' final drive with another interception.

Allen overcame a sluggish first half by engineering touchdown drives on Buffalo’s first two possessions of the third quarter. And the offense secured the win by running out the final 7:11 following Wallace’s interception.

In his eighth season in Buffalo, defensive end Jerry Hughes is the Bills’ longest-serving active player, and noted the transformation he’s seen in a team now conditioned to expect making the playoffs. He was among the players dancing on the sideline as the game came to a close.

A defense that ended Steelers QB Ben Roethlisberger’s string of not being sacked at 278 consecutive drop-backs over a five-plus game span when he was brought down by linebacker Matt Milano for a 10-yard loss in the third quarter. In its past seven games, Buffalo has combined for 20 sacks, forced 14 turnovers (10 interceptions) and limited opponents to converting 25 of 80 third-down opportunities.

A slow-starting offense that turned the ball over twice and was limited to six first downs and 102 yards on seven first-half possessions.

Wallace’s interception came when his playing time was beginning to diminish. Wallace played a season-low 25 snaps, while Josh Norman was on the field for 32, his most in three games since returning from injury.

Tight end Dawson Knox lost a fumble, which led to the Steelers opening the scoring, and finished with four catches on seven targets for 34 yards.

Johnson did not return after being evaluated for a concussion in the third quarter. ... WR John Brown will resume practicing after spending three weeks on IR with an ankle injury.

The Bills face a short week in traveling to play the Denver Broncos (5-8) on Saturday.