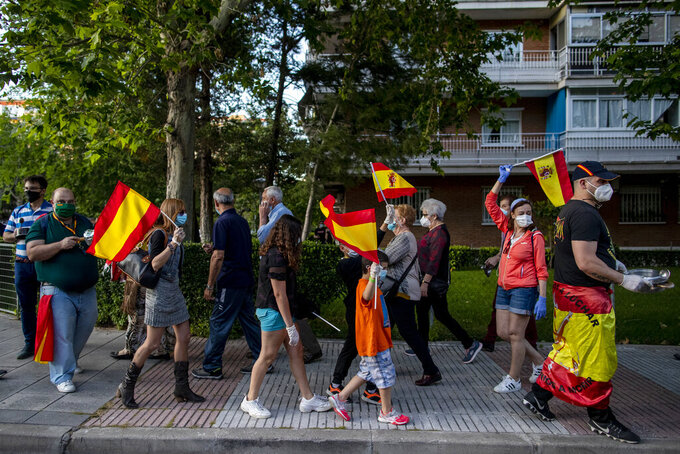 People holding Spanish flags protest against the Spanish government amid the lockdown to prevent the spread of coronavirus in Alcorcon, Spain, Wednesday, May 20, 2020. The regional authority of Madrid is appealing to Spain's Supreme Court over the Spanish government's refusal to ease its lockdown. (AP Photo/Manu Fernandez)

The outbreak of the coronavirus has dealt a shock to the global economy with unprecedented speed. Following are developments Thursday related to national and global response, the work place and the spread of the virus.

RETAIL ROUNDUP: Macy’s warns it could lose more than a $1 billion during its fiscal first quarter. The chain began to reopen stores earlier this month and expects most stores to be open in mid-June.

— TJX has reopened more than 1,600 of its stores worldwide to date. The discount retailer has fully or partially reopened in 25 states. TJX Canada began reopening stores in some provinces this week, and stores in Germany, Austria, Poland, the Netherlands and Australia are fully open. Stores in the U.K. and Ireland remain closed. TJX Cos. believes that it could be mostly reopened by the end of June, based on current government guidance.

— Best Buy managed to keep approximately 81% of last year’s sales during the last six weeks of the first quarter via its curbside service. The electronics and appliance retailer started opening some of its stores earlier this month. It currently has nearly 700 stores, or about 70%, that are open using a new consultation service where customers can come into the store by appointment only.

— Victoria’s Secret said Thursday it’s closing 250 stores in the next few months, about a quarter of all its stores. Its parent L Brands made that announcement as it reported a 37% drop in sales and widening loss for the company, dragged down by the lingerie brand. The company also operates Bath & Body Works.

Meanwhile, sales of existing homes plunged 17.8% in April. The National Association of Realtors said Thursday that last month’s decline pushed sales down to a seasonally adjusted annual rate of 4.33 million units, the slowest pace since September 2011. The sales drop was the largest one-month decline since a 22.5% fall in July 2010.

LIMITED SEATING: Southwest Airlines will continue to limit seating on flights through July. CEO Gary Kelly said the airline has $13 billion in cash, “well beyond” what it would normally carry and enough to last at least 20 months -- longer if there is a recovery in travel bookings.

— The Transportation Security Administration is changing procedures at airport checkpoints by mid-June, including no longer having screeners touch boarding passes. Passengers will put their pass on the electronic reader themselves, and then hold it up for the screener to inspect. TSA will also bend its rules on liquids by allowing one larger bottle of hand sanitizer, up to 12 ounces, in carry-on bags. TSA screeners will also change gloves after each traveler pat-down. TSA recently ordered its screeners to wear face coverings, but it's not requiring travelers to wear masks.

— Thirteen Senate Democrats are asking Delta Air Lines and JetBlue Airways not to reduce working hours for employees, saying that it violates terms of federal money they received to cope with the coronavirus pandemic. The senators said airlines “should not take one penny more of bailout funds” unless they protect worker pay and benefits.

Organized labor is pushing the issue, and United Airlines reversed a cut in hours for some workers after the machinists’ union sued. The airlines say that with travel demand down about 90%, they don’t have enough work to keep everyone on a full-time schedule. Delta and JetBlue said their moves comply with the virus-recovery measure. Delta got $5.4 billion and JetBlue got $935 million from a $25 billion fund to protect airline jobs through September.

— The top official in charge of easing Spain’s lockdown says that the country will reopen to foreign tourists in July.

— Austria is preparing to open its doors for the summer tourist season. Chancellor Sebastian Kurz said Thursday that people from countries where the coronavirus situation has stabilized could count on holidays with “maximum safety and maximum enjoyment” this summer. There’s already an agreement in place with Germany, Liechtenstein and Switzerland to open borders fully next month.

BACK TO SCHOOL: Cyprus is lifting most restrictions of a two month-long stay-at-home order, allowing primary school kids to return to classes and hair salons and outdoor cafeterias to reopen. Under the phased lifting of the restrictions, sunbathers can go to the east Mediterranean island’s beaches and the faithful can attend services at churches, mosques and other places of worship as of May 23. Libraries, museums, archaeological sites and ports reopen June 1, although cruise ship passengers won’t be permitted to disembark.

By sector, exports were lower in vehicles, machinery, chemicals and textiles. Imports edged down in iron and steel products, fish, cereal and computer parts. The drop in exports is the worst since the financial crisis more than 10 years ago.

MARKETS: U.S. stock indexes veered broadly lower Thursday, giving back some of their gains after a solid rally a day earlier.