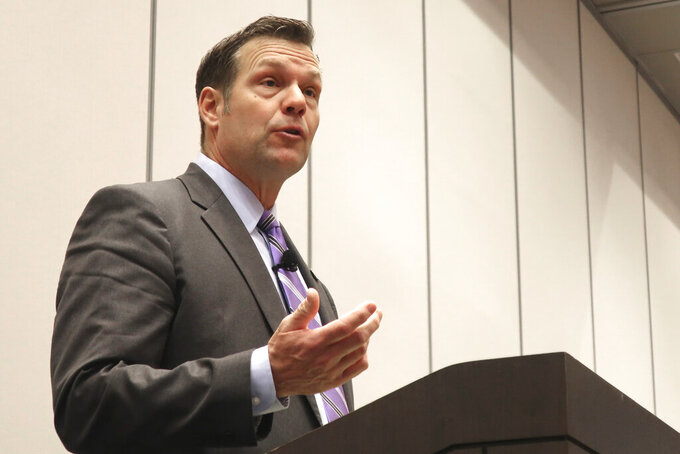 FILE - In this Feb. 1, 2020 file photo, former Kansas Secretary of State Kris Kobach, a candidate for the U.S. Senate, answers a question during a debate in Olathe, Kan. Establishment Republicans who'd been coy for months about the GOP primary for Kansas' open Senate seat are increasingly putting their thumbs on the scale. They're hoping to push western Kansas Rep. Roger Marshall to victory over polarizing conservative Kris Kobach. (AP Photo/John Hanna, File)

Roberts' endorsement came in a string of tweets in which he praised Marshall without mentioning polarizing conservative Kris Kobach. Roberts, the chairman of the Senate Agriculture Committee, touted Marshall's service on its House counterpart and said Marshall's experience as a doctor will be helpful during the coronavirus pandemic.

Marshall, an obstetrician, represents the same sprawling western and central Kansas district that Roberts did before being elected to the Senate in 1996. Marshall won the seat in 2016.

Roberts' backing is another sign of the Republican establishment's increasing solidarity behind Marshall ahead of the state's Aug. 4 primary election. He also has endorsements from the U.S. Chamber of Commerce and Kansans for Life, the state's most influential anti-abortion group.

Many Republicans worry that Roberts' normally safe seat would be in play if Kobach were the nominee. Republicans haven't lost a Senate race in Kansas since 1932.

Kobach, a former Kansas secretary of state, is nationally known for pushing tough immigration policies. He alienated independent and moderate GOP voters in losing the governor's race in 2018 to Democrat Laura Kelly.