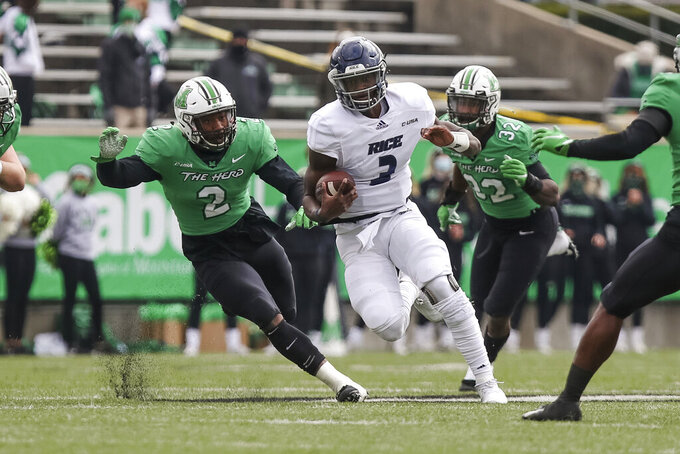 HUNTINGTON, W.Va. (AP) — Rice was offended when Marshall's offense stayed on the field on fourth down inside the Owls' 30-yard line on the first series of the game.

The Rice defense held — and took its frustrations out on the Thundering Herd the rest of the game.

Safety Naeem Smith returned one of five Marshall interceptions for a touchdown and Rice shocked the 15th-ranked Thundering Herd 20-0 on Saturday for their first loss.

The three-touchdown underdog Owls (2-2, 2-2 Conference USA) beat a ranked opponent for the first time since 1997 despite being without their two top offensive weapons and getting outgained 245 yards to 213.

“I think this is a huge statement about what Rice could be," said Owls linebacker Blaze Alldredge, who also had an interception. “We’re all underdogs here. We all have chips on our shoulders. But we all believe we can play with anybody.”

Alldredge said the Rice sideline did not like Marshall’s decision to go for it on fourth down right off the bat.

“You have them come out and disrespect us and take the ball and then go for it on fourth down and kind of act like they’re better than us?" Alldredge said. "We showed them today they’re not.”

Rice was missing quarterback Mike Collins and leading wide receiver Austin Trammell, who did not play due to undisclosed injuries unrelated to COVID-19.

Backup quarterback JoVoni Johnson had not attempted a pass in two previous games this season. The Owls didn't need his arm much, using its ground game behind freshman Khalan Griffin to eat up clock time against the nation’s top rushing defense.

“Offensively, we had some people step into some key roles, obviously starting with JoVoni Johnson at quarterback. The way he played, the way he led us today and made plays when we needed them," Rice coach Mike Bloomgren said. “I’m just so proud of this group of guys.”

What opportunities Marshall had, it threw away.

Redshirt freshman Grant Wells had by far his worst game of the season. Coming off a five-touchdown performance against Middle Tennessee on Nov. 14, Wells went 18 of 35 for 165 yards. His five interceptions Saturday surpassed his total of four from the previous seven games combined.

Wells threw directly to Smith midway through the third quarter. Smith took the interception 36 yards for a touchdown to put the Owls up 20-0.

After Wells’ fifth interception put Rice at the Marshall 23, Owls receiver Jake Bailey caught a pass from Johnson but fumbled as he was crossing the goal line for a touchback.

That was one of the few things that went right for Marshall.

“I just think that we messed up,” offensive lineman Alex Mollette said. “It’s a simple enough answer. I think that’s the biggest thing in this game: We lost who we were. We need to dial it back in and go back to work.”

Jordan Myers scored on a 1-yard run in the first quarter and Collin Riccitelli kicked field goals of 39 and 40 yards for Rice.

Marshall's Brenden Knox, who had surpassed 100 rushing yards in five of his six previous games, was limited to 76 yards.

Both teams had seen plenty of interruptions this season due to the coronavirus pandemic. Marshall had not played in three weeks, while Rice was playing only its fourth game of the entire season.

"We gave them some short fields and put our defense in some bad situations," he said.

Saturday’s game was originally scheduled for Oct. 3 but was postponed after Rice pushed back the start of its fall practice to late September due to COVID-19 concerns in the Houston area.

Rice: Without their top offensive weapons and playing just their fourth game of the season, the Owls played with a determination that paid off.

Marshall: The Thundering Herd were shut out for the first time since 2000 and for the first time at their home stadium. Marshall fell into a first-place tie in the East Division with Florida Atlantic with a week left in the regular season.

Marshall will make a steep drop in the AP poll and could even risk falling out.

Rice is scheduled to host UAB on Saturday.

Marshall will host Charlotte on Friday night. The Thundering Herd had been scheduled to play at Florida International the same night, but Conference USA announced Saturday that the game has been canceled.