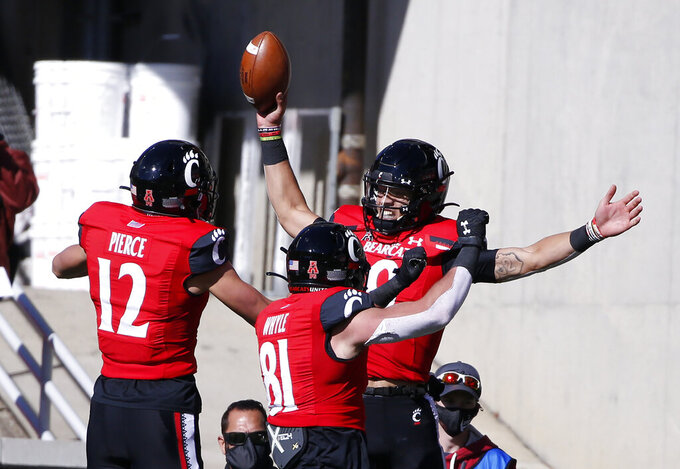 Cincinnati quarterback Desmond Ridder, rear, celebrates a touchdown against Memphis with teammates Alec Pierce (12) and Cam Jones (18) during the first half of an NCAA college football game Saturday, Oct. 31, 2020, in Cincinnati. (Photo by Gary Landers)

Playing in a Nippert Stadium nearly empty due to COVID-19 protocols, the Bearcats (5-0, 3-0 AAC) decisively snapped a five-game losing streak against Memphis (3-2, 2-2), including two losses by a combined 15 points over a span of eight days last season – the second in the AAC championship game.

Ridder, who set a program record for quarterbacks with 179 yards rushing while throwing three touchdown passes a week earlier at Southern Methodist, finished 21-of-26 for 271 yards with an interception.

“The games are slowing down for me," the junior said. “I'm just going out and being me and playing football. I'm enjoying it. We're all enjoying it. You can see it. We're just out there having fun.”

The stingy Cincinnati defense, ranked 18th in the nation in total defense going into the game, sacked Memphis quarterback Brady White six times while holding the Tigers to their fewest points since scoring 10 in a loss to Auburn in the Birmingham Bowl on Dec. 30, 2015. The loss was Memphis' worst since losing, 41-0, to Connecticut on Oct. 29, 2011. Memphis could muster only five yards rushing against the Bearcats.

“We weren’t good enough in any phase of the game and it starts with me," coach Ryan Silverfield said. "The effort was there, but it wasn’t good enough. We have to get better in all three phases, and that’s on me. It is embarrassing the way we ran the ball. We have to keep working and it starts with me. I was out coached. They pushed us around up front. I have to find a way to get better in the run game. In 22 years, I’ve never had a run game as ineffective as it was today.”

“We need the running game to help the passing game. We didn’t do that.”

“It wasn't just the 10 points,” Cincinnati linebacker Darrian Beavers said. “It was the 49-10. That was really satisfying. Obviously, we had those two games last year. There's a big difference from last year to this year.”

Cincinnati coach Luke Fickell talked to his team about not letting revenge become a factor.

“That's not something we talk about," he said. “It's a negative term. We don't want them to be emotional. We want them to play with emotion. We prefer to say ‘redemption.’ Our emphasis is on redemption, not revenge.”

Ridder threw touchdown passes of 43 yards to Alex Pierce and six yards to Michael Young and scored himself on a 13-yard run to help Cincinnati open up a 21-10 halftime lead. Pierce made a leaping catch at the goal line and tumbled between two defenders into the end zone for his first touchdown since returning from a knee injury to make his season debut at SMU.

Memphis’s only touchdown came on White’s wide receiver screen in the right flat to Tahj Washington, who broke free from a group of would-be Bearcat tacklers and raced to the end zone to complete a 92-yard play.

Washington lurched forward like a sprinter breaking the finish-line tape as he crossed the goal line.

The Cincinnati defense came up with a crucial stop on the Tigers’ first possession of the second half. Memphis drove to the Bearcats’ 10-yard line, but White couldn’t connect with well-covered tight end Sean Dykes on fourth-and-two.

Cincinnati right back with Ridder’s 45-yard bomb to Jayshon Johnson, who made a diving catch at the Memphis 11 to set up Ridder’s nine-yard touchdown run, helping the Bearcats take a 28-10 lead with 6:23 left in the third quarter. Ridder added a 21-yard touchdown pass to a wide-open Jayshon Johnson to break the game open with 1:27 left in the third quarter.

Ford tacked on two fourth-quarter touchdowns, the first coming on a 33-yard run on the first play after James Wiggins stripped White of the ball and Ty Van Fossen recovered for the Bearcats with 8:10 left in the game.

Combined with last week's 42-13 win at then No. 10 Southern Methodist, Cincinnati has won its last two games by a combined 91-23.

The loss cut Memphis's lead in the series with the Bearcats to 23-14. Cincinnati hadn't beaten the Tigers since 2013 in Memphis.

The only fans allowed to attend were family members of players and coaches, the band, dance team and cheerleading squad. That will be the plan for Cincinnati's last two home games of the season.

Memphis: The Tigers have lost 17 straight road games against Top 25 teams since winning at Auburn in 1975.

Cincinnati: The Bearcats improved to 9-1 all time when ranked in the top 10. Their only loss was to No. 5 Florida in the 2009 Sugar Bowl.

Memphis: The Tigers are scheduled to return home to face AAC cellar-dwelling South Florida (1-5, 0-4), which is coming off a bye week after being trounced at home by South Florida, 42-13, on October 23.

Cincinnati: The Bearcats are scheduled to meet Houston in the second of three straight home games. The Cougars went into Saturday’s game against Central Florida 2-1 overall and tied with Cincinnati for the AAC’s top spot with a 2-0 record.