Rio restarts soccer league next to field hospital for COVID 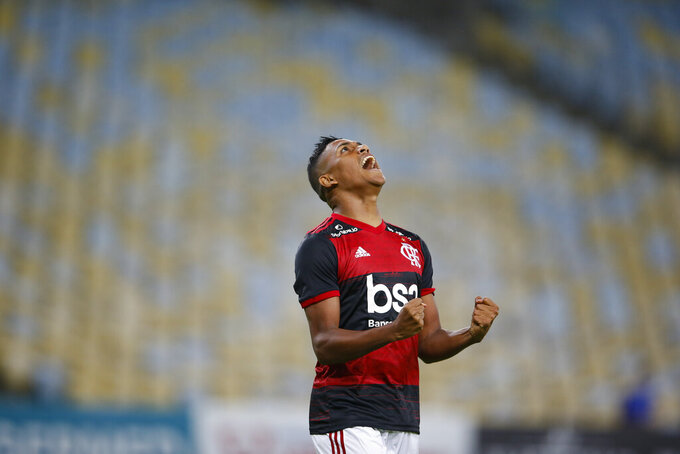 Flamengo's Pedro Rocha celebrates after scoring during a Rio de Janeiro soccer league match against Bangu at the Maracana stadium in Rio de Janeiro, Brazi, Thursday, June 18, 2020. Rio de Janeiro's soccer league resumed after a three-month hiatus because of the coronavirus pandemic. The match is being played without spectators to curb the spread of COVID-19. (AP Photo/Leo Correa)

RIO DE JANEIRO (AP) — In a sign of the times, the first professional soccer match in South America in nearly three months was staged in a stadium only meters away from a field hospital for hundreds of patients of COVID-19.

More than 47,700 people have died because of the new coronavirus in Brazil, and nearly 1 million have been infected. Rio de Janeiro state accounts for about 8,000 deaths, but authorities agreed to let soccer return this week after the number of available intensive-care unit beds showed slight improvement. Health experts predict Brazil's COVID-19 crisis will peak in August.

Goals by Giorgian de Arrascaeta in the 18th minute, Bruno Henrique, in the 66th, and Pedro Rocha in the 88th were celebrated with fist bumps.

Near the Maracanã's gate 2, a field hospital with 400 beds for coronavirus patients reminded the small group of people at the stadium why many health experts think it is too soon for soccer competition to resume.

A minute of silence was observed before kick off in a sign of respect to victims of COVID-19.

Rio soccer authorities did not allow mixed zone interviews with players after the match, also following health recommendations. But Flamengo coach Jorge Jesus spoke via video after the match.

“Our society will have to adapt until we have a vaccine. What is important is to know how to live, respect the virus, but have no fear of it,” the Flemengo coach said. “Soccer teams have the privilege of being constantly tested and working outdoors. Flamengo is working safely."

Flamengo players arrived wearing masks, and appeared to be excited to be back. They have practiced for three weeks, some days against recommendations. But some of their fans outside were protesting. Jumping and chanting with supporters of rival clubs, some fans also think it is too risky for soccer to return before Rio and Brazil have more control over the spread of the virus.

They also protested against President Jair Bolsonaro, who indicated he would attend the match but did not. Soccer's early comeback in Brazil is a victory for the president, who sided with Flamengo in the lobby. Rodolfo Landim, the president of the club, was in the capital Brasilia on Wednesday with Bolsonaro when Rio’s soccer organizers announced the match schedule.

Brazil’s president is one of the few leaders in the world to downplay the risks of COVID-19.

Despite all the pressure to restart, there was no TV broadcast of the match. Flamengo and the Globo network do not have a deal for Rio state league matches, which means fans could only follow the game on a radio broadcast or on the internet.

Two other top Rio clubs have rejected the move to start games. Fluminense and Botafogo took the case to the state's sports court, which on Thursday denied their request for a delay. The two clubs are considering taking action in the Brazilian sports court. Neither team is training for now.

The national championship, which was scheduled to start in May, has no date to begin. Clubs in other state leagues are considering a return next month if health authorities agree.

Club executives, the referee, his assistants, the media and a few others who entered the stadium had to undergo health checks.

All players had to go through a disinfection booth to be sprayed with sanitizer upon their arrival. They also had their temperatures taken by health staff.

Everyone except the players had to wear masks on the pitch. Replacements also had to abide by social distancing recommendations, with empty seats between players sitting on the bench. During halftime a group of staffers sanitized the bench once more.