The rite of autumn: The Masters comes to November 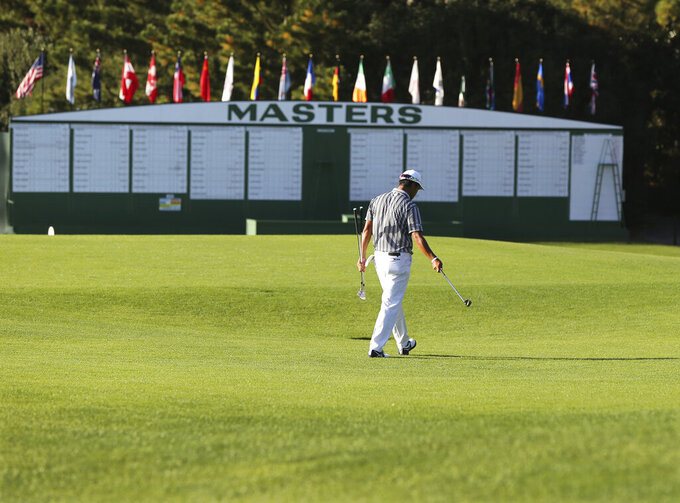 Hideki Matsuyama makes his way across the first fairway during the first practice round for the Masters golf tournament at Augusta National Golf Club, Monday, Nov. 9, 2020, in Augusta, Ga. The tournament is being played without patrons. (Curtis Compton/Atlanta Journal-Constitution via AP)

Last year: Woods won his fifth Masters and 15th major, and his first since the 2008 U.S. Open, by coming from two shots behind in the final round and closing with a 2-under 70 for a one-shot victory over Dustin Johnson, Brooks Koepka and Xander Schauffele.

Notes: This is the first time the Masters has not been played in the spring since it began in 1934. It was postponed because of the COVID-19 pandemic. ... Woods won his first major last year when he was trailing going into the final round. ... The field features only 43 of the top 50 in the world. Five players either won or moved into the top 50 since golf returned, while Sergio Garcia and Joaquin Niemann tested positive for the coronavirus and withdrew. The field was set for a Masters held in April, with no additions. ... C.T. Pan will have waited 561 days from the time he qualified by winning at Hilton the week after the last Masters until he tees it up on Thursday. ... Rory McIlroy gets his sixth crack at winning the Masters to complete the career Grand Slam. ... There will be no spectators allowed except for a player's significant other, coaches and Augusta National members. ... The tournament will use a two-tee start because of the smaller window for daylight in November. It last used a two-tee start in 2005 because of a nearly six-hour rain delay at the start. ... The 36-hole cut no longer includes a 10-shot rule. ... The next Masters is five months away. It will be the first time the same major is played consecutively since the PGA Championship was held in February in 1971 because it was in Florida.

Next tournament: PNC Championship on Dec. 19-20.