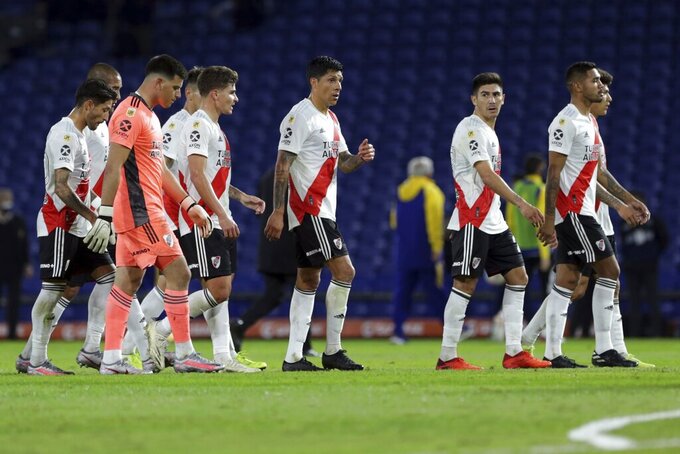 River Plate players walk off the field at the first half of a local league soccer match against Boca Juniors at the Bombonera stadium in Buenos Aires, Argentina, Sunday, May 16, 2021. (AP Photo/Daniel Jayo)

BUENOS AIRES (AP) — South American soccer body CONMEBOL rejected River Plate's request to include two replacement goalkeepers in its squad for a Copa Libertadores match after 20 of the Argentinian team's players, including all four 'keepers, tested positive for the coronavirus.

Coach Marcelo Gallardo said he did not know who will play between the posts for Wednesday's group D game against Independiente Santa Fe of Colombia.

River Plate currently has 10 active players after its request to include two youth team goalkeepers for the match at Monumental stadium in Buenos Aires was rejected on Tuesday.

River Plate is second in Group D with six points from four matches, two points behind leader Fluminense of Brazil.