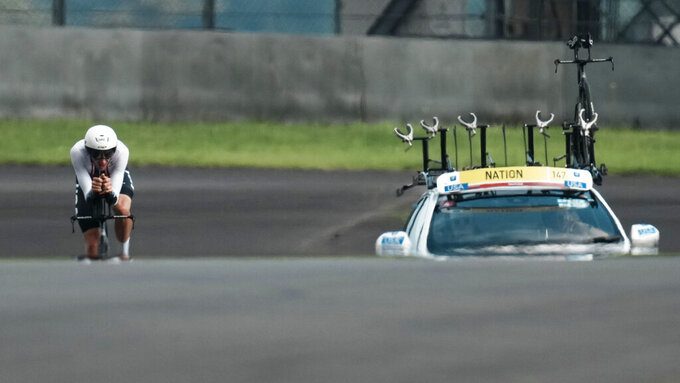 OYAMA, Japan (AP) — Primoz Roglic's dream growing up in the small coal-mining town of Kisovec was to represent Slovenia in the Olympics.

He'll have to settle for making a mock ski jump onto the top step of the podium in cycling.

After crashing out of the Tour de France, where he was supposed to rival countryman and eventual winner Tadej Pogacar, the 31-year-old Roglic simply obliterated the time trial course at the Tokyo Games on Wednesday.

He opened a narrow lead by the first checkpoint that eventually grew to more than a minute over runner-up Tom Dumoulin by the end.

“It's crazy,” Roglic said. “You know, you always hope the days you train for, in the end you get the best result. The last few races I did, they didn't go the way I wanted. But I always believed.”

Roglic finished in 55 minutes, 04.19 seconds. Dumoulin took silver and Australian rider Rohan Dennis was able to secure bronze, the second through fifth places of the race were separated by a mere four seconds in the only real drama.

“If I needed to be better today,” said Dumoulin, who returned from a mental break earlier this year to win his second consecutive Olympic silver medal, “I'm glad it was Primoz that won it. He also had his setback this year.”

Roglic, who finished second in the Tour a year ago, was expected to push Pogacar in France. But he fell heavily twice in the first three stages, and while he had no broken bones, he ultimately abandoned the race with plenty of bruises.

All it did was give him extra preparation time for Wednesday’s race.

Roglic was among the last to leave the starting line at Fuji International Speedway, setting a blistering pace from the moment he tucked into his aero position. Roglic had edged Belgian star Wout van Aert at the first time check, extended his lead over the field at the second and never let up during a dominating 44.2-kilometer romp.

“Every achievement is special,” Roglic said. “This one for me is super, super special.”

Especially given his long and winding road to cycling.

Roglic's first love was skiing — Slovenia has a rich Alpine heritage — and the feeling of soaring through the air. He was good enough that he won a gold medal at the junior world championships, too. But after a harrowing crash at Planica, one of the sport's greatest jumps, Roglic's battered body was airlifted away with a concussion and other injuries.

Afterward, his progress seemed to stagnate and Roglic was passed over for the Olympics. By his early 20s, he knew his skiing career was over and he began searching for another outlet for his competitive fire.

He found it on the bike. And a decade later, Roglic finally made it to the Olympics.

“It’s super hard,” he said, “when things aren’t going the way you like.”

Everything went Roglic's way on the time trial course southwest of Tokyo.

The breeze picked up as the afternoon wore on, which should have given earlier starters a slight advantage.

Among them was Hugo Houle, the seventh of 39 to take the course. Even though riders are roughly ordered so that those with the best medal chances go last, the Canadian laid down a time of 57:56 that stood for nearly an hour.

Remco Evenepoel was the first to knock Houle from his perch.

The 21-year-old son of former pro Patrick Evenepoel trailed Houle at the first two checkpoints, but he found another gear for the second lap around the course. With his chin rarely leaving his handlebars in an aerodynamic position, Evenepoel cruised down the long straightaway to set the new target 35 seconds better for the last wave of riders.

Colombia’s Rigoberto Uran, who was eighth in the road race, soon moved past the Belgian and into the hot seat. Uran was never able to get comfortable, though, with the time trial’s heavy hitters taking the course.

Roglic turned out to be the heaviest of them.

Slovenia only qualified one starting spot for the time trial, so Roglic got the nod over Pogacar, who is very good against the clock in his own right. And the decision was clearly the right one: Roglic caught and passed Polish time trial champ Kasper Asgreen, who started 90 seconds before him, early on the second lap around the speedway.

Roglic was so dominant, his victory was all but assured before he even reached the finishing stretch.