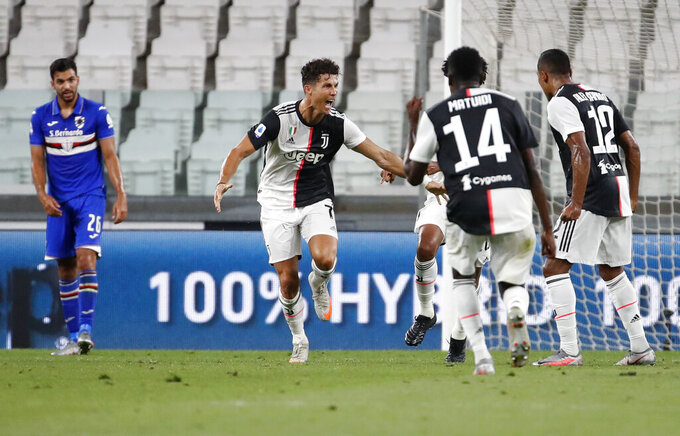 ROME (AP) — Before the break for the coronavirus pandemic. After the lockdown. And now for nine years running.

Juventus is the undisputed leader of Italian soccer.

At the final whistle, Juventus players danced in celebration and embraced each other before the empty stands inside the Allianz Stadium.

It was Juventus’ first title under coach Maurizio Sarri, who brought in a completely new system.

“It was the most beautiful title, because it was the most difficult,” said defender Leonardo Bonucci, who has been wearing the captain’s armband with Giorgio Chiellini injured. “We started a new era, a new philosophy, ran into so many difficulties, but we continued to give our all throughout, even when there were so many slip-ups.

“It was so complicated beyond the field, too; the world changed in three months. It was difficult to get our heads back into it after three months. We suffered.”

Bonucci dedicated the title to Juventus fans who were victims of the coronavirus.

“It’s for those who left us and cheered for us from up above,” Bonucci said. “It’s been an intense year. But we stayed together as a team.”

For his 31st goal in 32 matches, Ronaldo completed a set piece when Miralem Pjanić rolled across a free kick for the five-time Ballon d’Or winner to fire into the far top corner in first-half added time.

Federico Bernardeschi then sealed it by scoring his first Serie A goal in nearly two years by knocking in a rebound of Ronaldo's shot midway through the second half.

Ronaldo banged a penalty kick off the crossbar in the 89th.

Still, Juventus moved an insurmountable seven points clear of Inter Milan with two games remaining and can now switch its focus to the Champions League.

“Now we need to recuperate our energy and focus on Lyon,” Bonucci said.

It was a bittersweet night, though, as Juventus lost both right back Danilo and forward Paulo Dybala to injury in the first half.

Danilo clashed heads with a defender while Dybala pulled up with an apparent left thigh issue.

Juventus entered the break for the coronavirus pandemic with a one-point lead over Lazio in what was expected to be a two-way fight for the title but the Roman club struggled for much of the restart.

Sampdoria ended with 10 men when Morten Thorsby picked up his second yellow for a foul on Pjanić.

Immobile netted two penalties and also scored a magnificent strike in Lazio’s 5-1 win at Hellas Verona. He now has 34 goals in 34 matches — three more than Ronaldo atop the Italian league’s scoring chart.

Immobile’s second goal of the night was a thing of beauty: Set up by Jordan Lukaku on the left flank, he curled a shot into the far top corner.

Lazio moved level on points with third-place Atalanta, one point behind Inter Milan, and eight behind Juventus.

Roma increased its grip on fifth place by beating Fiorentina 2-1 with two penalties from Jordan Veretout.

Udinese won 1-0 at Cagliari and secured a 26th straight season in the top flight.

Relegation-threatened Lecce conceded a stoppage-time decider from Musa Barrow in a 3-2 loss at Bologna.