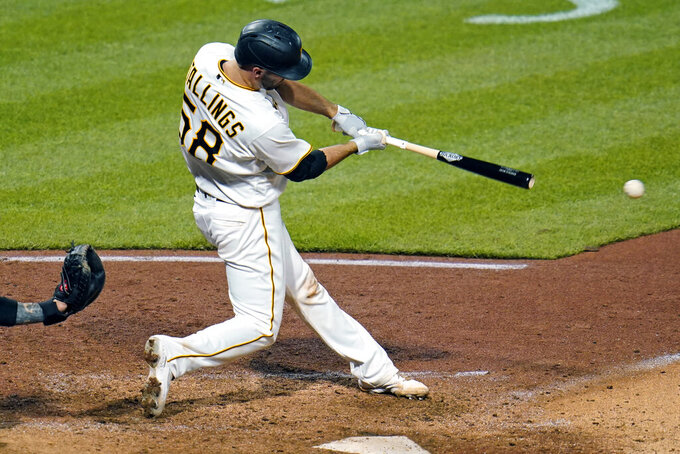 PITTSBURGH (AP) — Rookie Ke’Bryan Hayes homered for the second game in a row since being activated from the injured list and drove in three runs to lead the Pittsburgh Pirates to a 9-2 victory over the Miami Marlins on Friday night.

Hayes hit a two-run home run in the first inning and an RBI single during a five-run sixth that broke the game open. He also connected Thursday in his first game after missing two months with a sprained left wrist with his father, former major league third baseman Charlie Hayes, watched from the stands.

Hayes, though, is not surprised about making an immediate impact.

“Down in my rehab games (at Triple-A Indianapolis), I was feeling pretty good,” Hayes said. “A lot of it has to do be confident in your prep works before the game then sticking with your approach, trying to hit the ball up the middle and having fun.”

“With Ke’Bryan and Bryan hitting me behind me, we have a chance to score a lot of runs,” said Frazier, the Pirates’ leadoff hitter, who called Hayes “a real spark.”

Rookie Jose Devers hit two doubles for Miami and Sandy Leon had two hits. With his team down seven runs, Leon moved from catcher to pitcher in the eighth inning and retired the side in order.

A seven-game losing streak has dropped the Marlins into last place in the NL East a year after qualifying for the postseason for the first time since 2003.

“We can’t look at what position we’re in right now,” Miami manager Don Mattingly said. “We’ve got to move forward and get past that. We start putting wins together and things can change quickly. It’s not like we’re 20 games out. It’s a matter of getting back on track. We’re still in the beginning stages of a marathon and we’re still in view of the leader.”

Miami rookie Cody Poteet (2-2) was removed with two outs in the third inning with a strained medial collateral ligament in his right knee. Making his fifth career start, Poteet gave up three runs and walked four.

A night earlier, Marlins starter Elieser Hernandez was forced from the game with a strained right quadriceps.

The Pirates’ Mitch Keller was lifted for a pinch-hitter in the bottom of the second because of a heat-related illness. Keller walked the bases loaded then gave up a two-run double to Devers in the top of the inning that pulled the Marlins into a 2-2 tie.

“He didn’t feel well, and he didn’t feel he could continue to go on,” Pittsburgh manager Derek Shelton said. “After taking a look at him, he wasn’t looking good, so we took him out.”

The Pirates were able to overcome losing Keller.

“We needed to pick him up and we did,” Hayes said.

RBI singles by Gregory Polanco in the third and Frazier in the fourth put the Pirates ahead for good at 4-2. Jacob Stallings’ two-run single capped the five-run sixth a night after his three-run double in the eighth inning gave the Pirates a 5-3 win.

Duane Underwood Jr. (2-2) pitched two scoreless innings in relief of Keller. Chris Stratton finished with a 3 2/3 perfect innings for his save of the season and second of his career.

Pirates first baseman Will Craig was designated for assignment to clear a roster spot for the activation of right-hander JT Brubaker from the COVID-19 injured list.

Brubaker was required to go through the COVID-19 intake process after being reinstated from the bereavement list Thursday. He was away from the team following the death of his grandmother.

Marlins: Hernandez was placed on the 10-day injured list. He was hurt while running the bases in his first game back after missing two months with right biceps inflammation. … OF Lewis Brinson was recalled from Triple-A Jacksonville just one day after being activated from the IL and sent to the minor leagues. Brinson had been sidelined by a sprained left middle finger.

Marlins rookie LHP Trevor Rogers (6-3, 1.87 ERA) faces Pirates RHP Chase DeJong (0-0, 1.80) on Saturday. Rogers is the first pitcher with at least 76 strikeouts and an ERA under 2.00 in the first 11 starts of a season in Marlins’ history. DeJong will be making his second start since being called up from Triple-A Indianapolis.