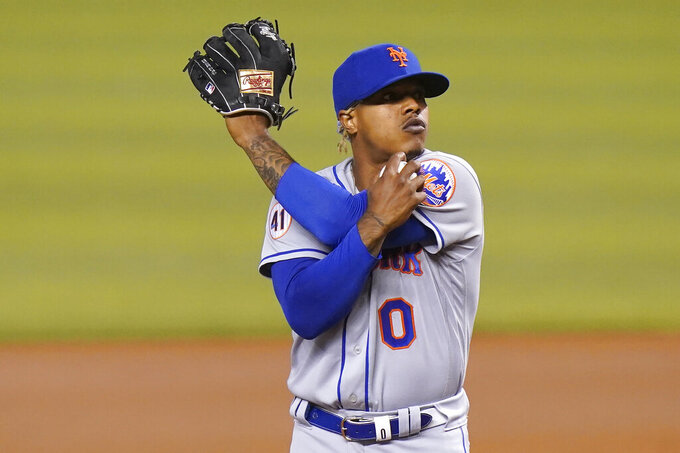 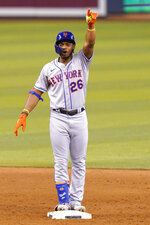 Lee hit a tiebreaking RBI double in the 12th inning for his first career hit after strikeouts in his first eight plate appearances — a major league record — and the New York Mets beat the Miami Marlins 6-5 Friday.

“This is about the best scenario you could draw up, to come up in a big situation with the team counting on me, and to come through with the lights shining,” Lee said.

Jake Hager also registered his first big league hit, a leadoff single in the 12th off Adam Cimber (0-1) that advanced the automatic runner to third. After Lee pulled a double to right field, Johneshwy Fargas hit a two-run triple but was thrown out trying to stretch his hit into an inside-the-park homer.

Lee made his big league debut last week, and manager Luis Rojas said it was exciting to see him come through after looking uncomfortable at the plate in earlier games.

“He was trying to hit the ball 600 feet,” Rojas said. “The kid has pop. That’s what got him here. He just has to make contact.”

The Mets won despite totaling only eight hits against 10 Miami pitchers. The Miami bullpen retired 15 consecutive batters during one stretch.

“It’s a big win,” Rojas said. “It's emotional because of all the things we had to do.”

The Marlins debuted uniforms with bright red pinstripe jerseys honoring the Cuban Sugar Kings, who won the Triple-A championship in 1959, but the new look failed to spark their sputtering offense. They went 3 for 17 with runners in scoring position and fell to 4-9 in one-run games.

“We just weren’t able to get the big hit when we needed it," manager Don Mattingly said.

Miami’s Garrett Cooper tied the game with a two-run homer in the seventh, his fourth. But he struck out against Trevor May with the bases loaded to end the eighth.

Drew Smith (1-0) stranded a runner at third in the 11th. Jacob Barnes got the game's final out for his first save since 2018.

“The pen has been incredible,” Mets starter Marcus Stroman said. “They’ve showed up every single time.”

Stroman allowed two runs in six-plus innings and struck out eight, but he remained winless since April 18. He departed after giving up a leadoff walk in the seventh, and Cooper followed with his homer off Miguel Castro.

Francisco Lindor and Tomás Nido contributed RBI doubles for the Mets. Lindor drove home the first run in the first inning, and he scored from second on a flyout when center fielder Magneuris Sierra made an errant throw to third.

Nido's RBI double came in the fourth, but he was thrown out by Sierra trying to score on a two-out single.

New York has six consecutive victories in Miami since July 13, 2019.

The ups and downs in extra innings included a pratfall by Marlins catcher Sandy Leon. He was trotting to the mound for a visit in the 10th when he stumbled and fell to all fours.

Mets RHP Jacob deGrom (right side tightness), who worked three hitless innings Thursday in a rehabilitation outing for the St. Lucie Mets, is scheduled to throw a side session Sunday and pitch in another game on Tuesday. It has yet to be determined whether that outing will be with the Mets or another rehab start, Rojas said.

Mets: 2B José Peraza (bruised right calf) left the game in the fifth inning after being hit by a pitch. ... INF Pete Alonso (sprained right hand) and RHP Tommy Hunter (lower back pain) went on the 10-day IL retroactive to Wednesday. An MRI was planned for Hunter.

Beginning with the Mets’ next homestand that starts Monday, fans at Citi Field will no longer be required to show proof of a negative COVID-19 test. The team will open 21 sections to fully vaccinated fans that will not require social distancing, bringing capacity to 12,222.

Marlins RHP Pablo López (1-3, 3.12), who beat the Dodgers in his most recent start, is scheduled to take the mound Saturday. The Mets' starter had not been announced.