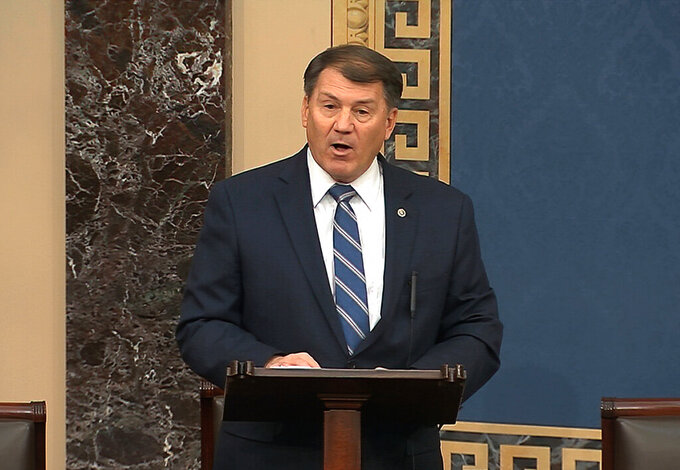 FILE - In this file image from Feb. 4, 2020, video, Sen. Mike Rounds, R-S.D., speaks on the Senate floor about the impeachment trial against President Donald Trump at the U.S. Capitol in Washington. Poll workers will attempt to space voters apart Tuesday, June 1, during South Dakota's primary election, although there's a good chance most ballots will have already been submitted ahead of in-person voting. (Senate Television via AP, File)

The secretary of state’s office reported that nearly 87,000 absentee ballots had been returned by Tuesday afternoon, which is almost four times the number received in the 2018 primary. The state had encouraged people to vote absentee to avoid crowded polling places during the coronavirus pandemic.

Election officials have had to scramble to process the deluge of absentee ballots, the Argus Leader reported. The main-in ballots take extra steps to process like matching signatures on the absentee application and the ballot.

Meanwhile, GOP Sen. Mike Rounds and Rep. Dusty Johnson coasted to victory in their Republican primaries and both are considered strong favorites to win second terms. The election was also deciding a host of legislative, city and school posts, including some contests that were postponed due to virus concerns.

Jess Jones, a Sioux Falls voter, said the current turmoil in the country motivated her to vote Tuesday.

“With recent events, any time you have a voice, you should use it to vote for the people that best represent you,” she said.

Rounds is a former governor who has focused on agriculture and military policy. While Borglum criticized him for encouraging Chinese foreign investment in the past, Rounds has appeared more assertive on Chinese policy during the coronavirus crisis, stating he believes the coronavirus can be linked to a lab in Wuhan that studies infectious diseases.

Johnson has a clear path to winning a second term in South Dakota’s lone seat in the U.S. House after defeating former state legislator Liz Marty May for the Republican nomination. He will not face a Democrat in the November general election but will run against Libertarian Randy “Uriah” Luallin.

Johnson, who is from Mitchell, appears to have a huge fundraising advantage over Luallin. He has focused on agriculture policy and argued for restraint in government spending in response to the coronavirus crisis.

All 105 seats in the Legislature are up for grabs in November, but one powerful Republican leader won't be returning to the Capitol after losing to a political newcomer.

Erin Tobin, a nurse from Winner, defeated the current House Majority Leader Lee Qualm to win the GOP Senate nomination for District 21 in the southern part of the state. She will face Democrat Dan Kerner Andersson in the November general election.

Tobin challenged Qualm after he introduced a bill this year that would have gotten rid of schools’ requirements for vaccinations. The bill was condemned by health care groups across the state because it would have decreased vaccination participation.

Tobin received the backing of doctors in the region and raised more campaign cash than Qualm. The race turned aggressive in recent days, with Tobin saying she had been the subject of “personal attacks.” She asserted her conservative stance on a range of social issues and was able to end Qualm’s eight-year tenure in the Capitol.

Tobin may still face a challenge in the general election as she competes in a district where Democrats have been competitive.

Voters decided on 26 other Republican primaries Tuesday as the GOP seeks to strengthen its grip on the Statehouse.