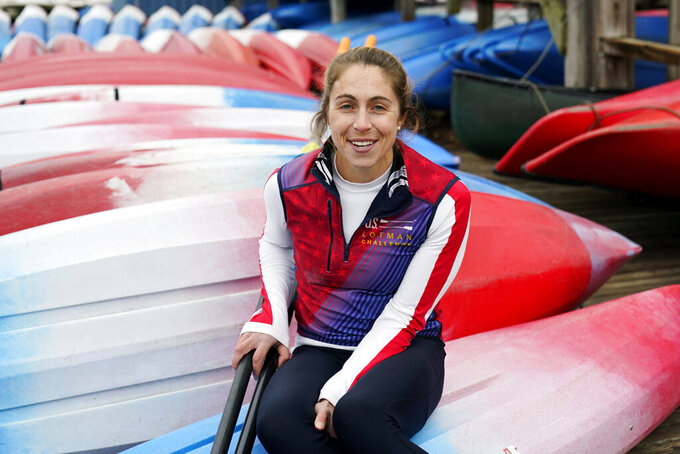 Rower Gevvie Stone poses for a photo at Lady Bird Lake ahead of the upcoming U.S. Olympic rowing trials, Friday, Feb. 12, 2021, in Austin, Texas. Stone is getting closer to a hopeful return to the Olympics and eventually the medical career she has put on hold for nearly three years. The silver medalist at the 2016 Rio de Janeiro Olympics came out of retirement and postponed her medical career as an emergency physician for one last chance at a gold medal. (AP Photo/Eric Gay)

AUSTIN, Texas (AP) — With every pull of an oar in the water, Gevvie Stone gets closer to a hopeful return to the Olympics and eventually the medical career she has put on hold for nearly three years.

One is still uncertain. The other is coming whether the Tokyo Games happen or not.

The 35-year-old, two-time Olympian and 2016 silver medalist in women's single sculls will be rowing for a return to the Olympics starting Monday when the U.S. trials begin in Sarasota, Florida.

She'll be among the favorites in the 37-woman field to qualify for one last shot at a gold medal.

“It’s very exciting. It's also very nerve-wracking," Stone said before she cut short her winter training camp in Austin, Texas, and bolted for Florida ahead of the winter storm that knocked out power and water to millions.

“I’m getting older, I have more aches and pains than I did four years ago. In the last two years, this has been more for the personal challenge. I still enjoy it, but it's really different. I had to really question whether I had what it took both physically and mentally and emotionally to do another 12 months.

“It was interesting to hear people say it's just one more year,” Stone said. “It's not a small ask, especially where I am in my medical career.”

A graduate of Tufts University medical school, she already had retired from rowing after the 2016 Rio de Janeiro Olympics and started her multiyear residency at Beth Israel Deaconess Medical Center in Boston. Stone said she loves medicine and the adrenaline rush of the emergency room that is her calling as a doctor, a contrast to the solitude of the single sculler on the water.

But rowing is in her blood. Her mother was a 1976 Olympian and two-time medalist at the world championships. Her father is her coach. The last chance at a gold medal was too much to resist.

Delaying her medical career was hard enough to do once. Having to do it a second time after the 2020 Games were postponed because of the coronavirus pandemic was even harder as COVID-19 was starting to overwhelm hospitals. Stone's heart was tugging her in two directions: her love of rowing and her Hippocratic oath as a doctor.

“It almost never happens where people will postpone or take time off in a residency training,” said Dr. Carlo Rosen, who has directed the emergency medicine residency program at Beth Israel Deaconess for 20 years. “But it's even more unusual that someone in the program is training for the Olympics. We wanted to be as supportive as we could.”

Rosen said that didn't change when the pandemic hit. While Stone offered to return to help if needed, knowing hospitals were preparing for the worst, Rosen said the residency program didn't want to expose her to increased risks of being exposed to the virus.

“We had committed to let Gevvie do her training," Rosen said. “She has tremendous skill ... We had been confident that when she returns and gets through the residency program, she will be an outstanding emergency physician.”

Stone knows there can be no more delays or cancellations. She has to return to the residency program after the Tokyo Games are scheduled to end in August, or she'll have to start the program all over.

That means there won't be any do-overs on the water. If the Olympics don't happen on schedule, her rowing career is over.

“I want to start (residency) again, but also I have to start again,” she said.

Joining Stone as the favorite at the trials is Kara Kohler, who won Olympic bronze in quadruple skulls in 2012 but didn't qualify for the 2016 Games. She switched to single sculls and finished third at the 2019 world championships in Austria.

Kohler said the postponement of the 2020 Games was deflating during what she called a “brutal year mentally."

“My motivation was terrifyingly low during those first couple of months, which made training incredibly difficult,” Kohler said.

The U.S. trials start with the presumption — but no guarantee — that the Tokyo Games will happen, with organizers pressing ahead with plans to hold them despite the pandemic.

Stone is just happy to see both the games, and what lies beyond them, in sight. The 2020 U.S. trials were canceled four days before they were supposed to start.

"I don't think anybody can be confident of anything more than a day away in the current world," Stone said. “I'm hopeful for the Olympics. I do what I do every day because I'm planning on their happening.”