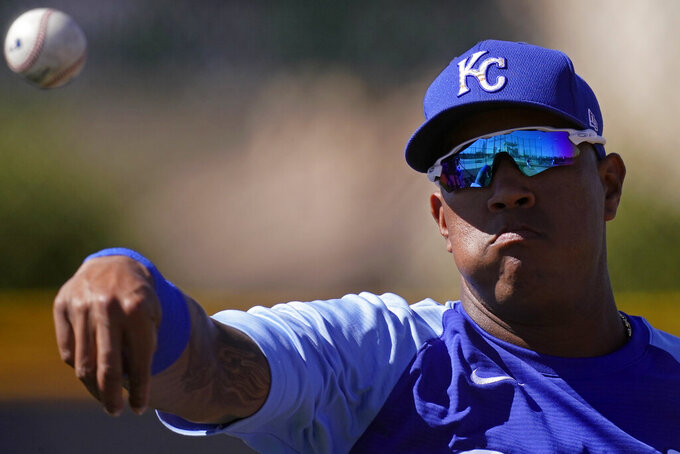 Salvador Perez and Adalberto Mondesi each arrived at spring training a year ago after significant surgeries, and they spent the time leading up to the COVID-19 pause wondering whether they would be ready for opening day.

There's no such trepidation this year.

Perez, who missed all of 2019 following Tommy John surgery, and Mondesi, whose season ended with shoulder surgery, took advantage of the break between the original spring training and spring training 2.0 — when baseball resumed a ramp up for a season unlike any other. They were fully healed by the time July rolled around, and each took advantage of the health they were finally afforded by putting together standout 60-game sprints.

Perez led all catchers with a .333 average, hitting 11 homers and driving in 32 runs while winning his third Silver Slugger award. Mondesi hit .356 with six homers and 20 RBIs over for the final month of the pandemic-shortened season.

Now, the Royals' longtime catcher and standout shortstop are optimistic they can carry that into a full 162-game season.

“I think for this team, we just want to win, you know?” said the 30-year-old Perez, who signed with Kansas City as a 16-year-old out of Venezuela and is entering the final year of the $52.5 million, six-year contract he signed in March 2016.

“We're going to compete," he said. "They brought in some great players, players with a lot of experience in the big leagues, and playoffs, too. We just want to win. We're a good team, we're going to prepare ourselves to be ready every day, play our best and see what happens end of the day.”

While his arm wasn't an issue after Tommy John surgery, Perez still had had to overcome some adversity once spring training resumed last summer. He was sidelined for part of camp after contracting COVID-19, then he had an issue with his eye that led to some blurry vision and limited him to 37 games during the season.

The six-time All-Star said those issues also are in the past.

In fact, Perez has been bouncing around the campus in Surprise, Arizona, like youngster during the first week of full-squad workouts and leading up to their spring training opener against the Rangers this weekend. He is often among the first in the batting cages, and manager Mike Matheny has held him up as the standard for the rest of the team.

“Salvy is my go-to example,” he said. "You throw him in the cage at 8 o'clock in the morning and he's verbally telling them, ‘You’re going to have to outwork me to take my job, and it's not your job yet,' and then he physically outworks them and proves it, and that's him every day. ‘This is my job. I’m going to keep pushing.'

That includes Mondesi, the 25-year-old whiz who has yet to fully realize his potential. He was headed for a breakout year in 2019 when the shoulder injury put him on the shelf, and he has still yet to play more than 103 games in a season.

But after a slow start last season, Mondesi showed over the final month that he can provide an offensive spark along with his slick defense. He hit all of his homers and drove in all but two of his runs down the stretch, and a solid offseason has the Royals believing that he will capitalize on the momentum that he established in September.

“As good of a representation of talent as I’ve ever seen in baseball, period,” Matheny said. "We know that there’s something there, to take one step closer towards consistency. That’s what we’re looking for: How can we help him get into a place that takes a step toward doing what we know he can do a little more often than what he’s done it?'”

That's a question the Royals — as a team — are hoping to answer after edging closer to .500 by the end of last season.

Healthy versions of Perez and Mondesi could provide an answer.