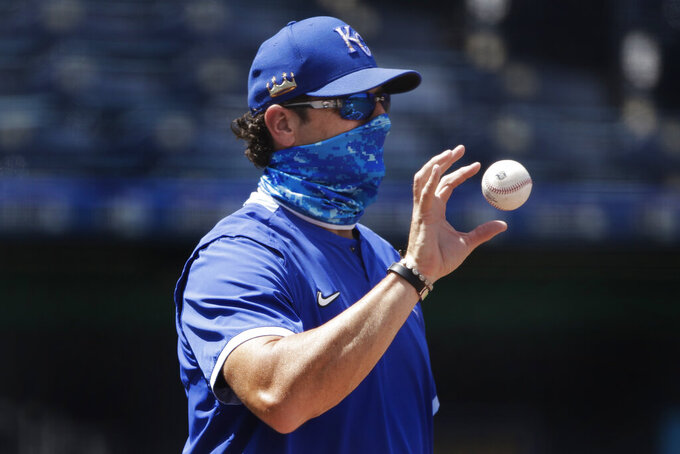 KANSAS CITY, Mo. (AP) — When the coronavirus pandemic led to an overhaul of the baseball schedule, Mike Matheny had an strong suspicion he'd be headed back to St. Louis to face his former team in his first season in charge of the Kansas City Royals.

Matheny probably didn't bet on seeing the Cardinals before the season even began.

Yet the two clubs, separated by about 250 miles of interstate on opposite sides of Missouri, will square off in an exhibition game at Busch Stadium next week. The game on July 22 will cap a three-game exhibition slate for the Royals — they will first play a pair of games against the Houston Astros — before their 60-game regular-season starts July 24 in Cleveland.

“Its going to be another opponent. It truly is,” said Matheny, who is taking over for the retired Ned Yost after a year spent working as a special adviser to the Royals — a job that came on the heels of a roller-coaster tenure in St. Louis.

Matheny was hired to replace the retiring Tony La Russa not long after the Cardinals beat the Texas Rangers to win the 2011 World Series. The longtime catcher kept the success rolling, too, leading St. Louis to three division titles, three appearances in the NL Championship Series and a trip to the World Series after the 2013 season.

But things began to turn sour when the Cardinals missed the postseason in 2016, and rumblings began of a rift forming between Matheny and his players. It didn't improve much the following year, and Matheny was fired 93 games into the 2018 season, only to watch his replacement Mike Shildt lead a quick turnaround that nearly ended with a wild-card berth.

Matheny acknowledged spending that season doing some work on himself. He read books about leadership, took classes and basically went back to school on how to effectively lead a group of ballplayers in an effort to learn where he went awry.

The results had been striking before the pandemic brought spring training to a screeching halt. Royals players were effusive in their praise for the way Matheny related to him, and the energy the 49-year-old manager brought to the club resulted in a different feel for a young clubhouse in the early stages of what could be a long and difficult rebuilding process.

“Mike has been amazing,” Royals general manager Dayton Moore said during a recent Zoom interview. “I haven't heard Mike complain one bit. I've tried to get Mike to complain. So from our part, everything has been good.”

Matheny's leadership certainly has been put to the test. The Royals have had All-Star catcher Salvador Perez, backup Cam Gallagher, pitcher Brad Keller and first baseman Ryan O'Hearn — all players expected to make the roster once spring training 2.0 is complete — test positive for COVID-19 during the closely monitored preseason workouts at Kauffman Stadium.

All the stress that comes with daily life during the pandemic was briefly put on the back-burner Monday, though, when the Royals announced their exhibition plans. Matheny said the thought of playing another team early next week put a bounce in his players' steps, and it gave him confidence that the season will begin as Major League Baseball has planned.

“I know our guys are excited thinking about another team,” he said, “but they've been so cooperative with all the intrasquads and seeing the work needed and begging for me. You can tell when guys are feeling burned out but they're not like that.”

And how is Matheny feeling about heading back to some familiar environs?

“I think all of us were realistic. Geographically, it made sense from the beginning that it would make sense to have something happen (in St. Louis)," he said. “It lessens the travel we have to do. It's a team we play six times, which was part of the conversation. We don't play them here for a bit. I think the team appreciates the fact that we won't have exhibition games against the teams we open up against. Every one of these games is going to mean so much.”

The Royals do not play the Astros at all during their 60-game slate. Their first three games against the Cardinals don't happen until Aug. 24-26 in St. Louis, while their other three happen at home in September in the final week of the season.

“I'm excited to see our guys playing against another team and it just so happens to be another team on the other side of the state that our fans love seeing our team play against,” Matheny said. “We’ll feel our way through the way those work in terms of how many innings. We’ll keep a good number of the guys here. Space out the first couple of games. And then Dayton and I will talk about what size of roster we take to St. Louis before we head north.”