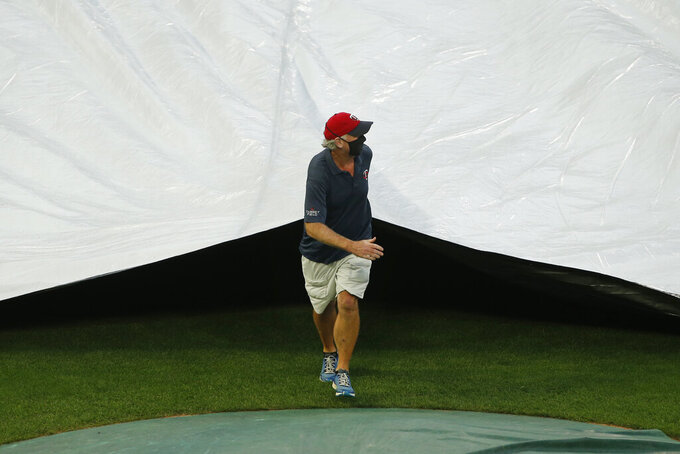 Minnesota Twins head grounds keeper Larry Devito pulls a tarp across the infield prior to the postponement of a baseball game with the Kansas City Royals, Friday, Aug. 14, 2020, in Minneapolis. The game was postponed due to multiple approaching thunderstorms. (AP Photo/Bruce Kluckhohn)

MINNEAPOLIS (AP) — The Minnesota Twins postponed their game against the Kansas City Royals on Friday night because of stormy weather, scheduling a straight doubleheader on Saturday instead to start the series.

With darkened skies above Target Field and a steady rain just beginning to fall, the Twins called off the game right around the scheduled first pitch. About an hour later, a tornado warning was issued for Hennepin County

This was Minnesota's first postponed game of the 2020 season that began four months late due to the coronavirus pandemic. The Twins and Royals will continue their four-game series on Sunday and Monday. The Royals swept a three-game set from the Twins in Kansas City last weekend.

The doubleheader will start on Saturday at 12:35 p.m., with the second half of the twinbill scheduled to begin 30 minutes following the end of the first game. All doubleheaders in Major League Baseball during this virus-shortened 60-game season are seven-inning games.

To accommodate the St. Louis Cardinals, who haven't played since July 29 at Minnesota before COVID-19 spread through the organization, the Twins were scheduled for a twinbill at St. Louis on Sept. 8 to take care of their two-game series with the Cardinals in one day.

“In a doubleheader context, I’m open-minded to this,” Twins president of baseball operations Derek Falvey said earlier on Friday. He added: “The idea of us playing a little bit shorter, I would be open to personally.”

Prior to the game, the Royals activated center fielder Bubba Starling from the injured list after nine days on the shelf. Starling didn't feel well, so the club erred on the side of COVID-19 caution by putting him on the IL. He had symptoms that raised concern about the virus, but he was not infected.

“Just a cold,” Starling said. "It took me some days to get over it, but I’m feeling good now.”

Jake Odorizzi was scheduled to start for the Twins on Friday. The Royals were planning to use Ian Kennedy as an opener, followed by Jakob Junis as the primary pitcher.

The Twins will send Odorizzi to the mound for the first game on Saturday, followed by José Berríos. Kennedy will open for the Royals, and Danny Duffy will take the second game.

Kennedy will make his first start since Sept. 28, 2018, a 687-day span. The 35-year-old right-hander, who became the closer last season, has 289 career major league starts. This will be the first time the Royals use an opener followed by a designated primary pitcher, though they have used relievers to start games a handful of times.

Odorizzi will make his second start of the season, after a delay due to back trouble. The Twins have carefully tread through the schedule with some minor injuries to their rotation, with Rich Hill and Homer Bailey still on the injured list. Hill threw a 60-pitch bullpen session at the team's alternate training site in St. Paul, and manager Rocco Baldelli said he expected Hill to start a game in the coming week.

The greater concern for the Twins is prized acquisition Josh Donaldson and his strained calf, which has kept him out for 11 games and counting. That injury has nagged the third baseman in the past.