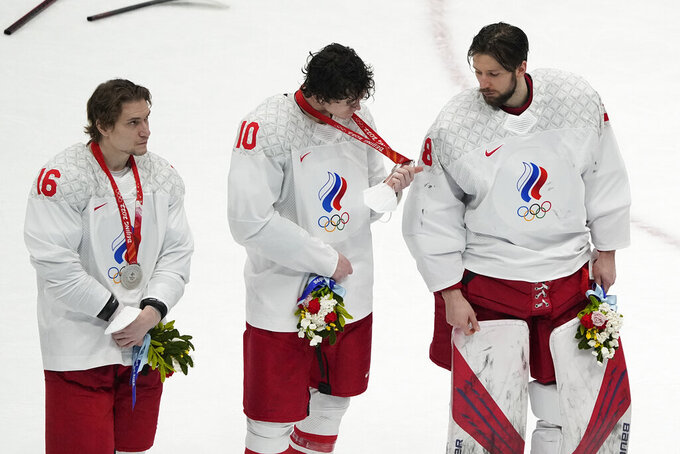 BEIJING (AP) — The silver medal is the prize no one wants to wear after an Olympic hockey final. So Ivan Fedotov didn't.

The Russian goaltender held his medal in his hand instead of putting it around his neck after a 2-1 loss in the gold-medal game Sunday to Finland, the country of his birth.

The NHL's absence made Fedotov, a 25-year-old Philadelphia Flyers prospect who has played his whole career so far in Russia, the starting goaltender at the Olympics. Fedotov was born in Finland with Russian-Finnish heritage and grew up in Russia. With the Russians scoring few goals at the Beijing Olympics, his saves made him a star.

“He carried our team the whole tournament,” former Buffalo Sabres forward Mikhail Grigorenko said of Fedotov. “He’s probably the one player that deserved gold the most on this team. But it’s a team sport. And we probably didn’t play well enough in front of him.”

Once again at the Olympics, the Russians just couldn't cross the “Finnish” line.

Russian gold medal hopes were ended by Finland for the second time in three Olympics. They were upset 3-1 by the Finns in the quarterfinals as hosts of the 2014 Sochi Games. The Russian men’s team has not beaten Finland in Olympic play since 1998.

Finland held on at the end to ensure there would be no repeat for the defending champion Russians. At the 2018 Pyeongchang Games, the Olympic Athletes from Russia — as they were known because of doping sanctions — were trailing 2-1 with a minute left in the final but clawed back to an overtime victory.

Now branded as ROC, short for Russian Olympic Committee, after another doping dispute, the Russians were the clear pre-tournament favorites once the NHL confirmed in December it wasn't sending players to the Beijing Games. Despite having a deep roster, they never quite looked dominant on the ice.

From the opening 1-0 win over Switzerland to a 2-1 semifinal victory over Sweden that was settled in an eight-round shootout, the Russians scored first in all six games but had to cling on through a series of close, nervous finishes.

The gold-medal game turned on small margins. After Grigorenko scored in the first period to give the Russians the lead, the Finnish goals each came with traffic in front, the first by Ville Pokka and the second when Hannes Bjorninen redirected a shot by Marko Anttila. Fedotov said he didn't see the first goal and was fooled by the ricochet on the second.

Even as he rued the loss, Fedotov was happy to be at the Olympics — something which didn't seem possible for a non-NHL Russian goalie three months ago.

“The NHL didn't travel and we ended up here,” Fedotov said. “I'm grateful to fate and to everyone that I had this chance to play and to take the team to the final. That's worth a lot.”