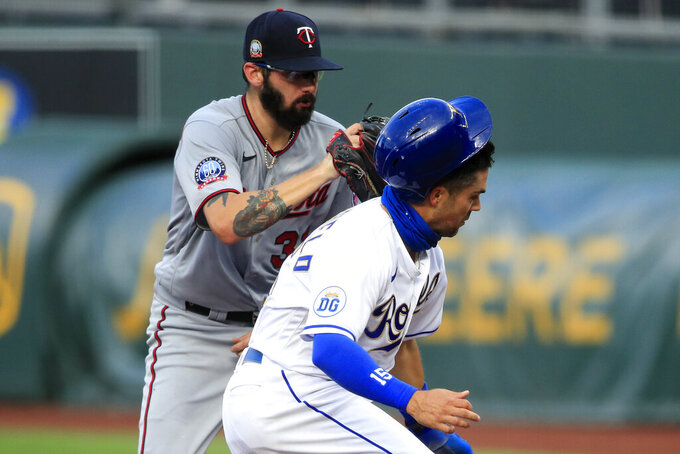 KANSAS CITY, Mo. (AP) — The Royals won the World Series five years ago with a bullpen that rarely squandered the slimmest of leads.

After getting a go-ahead homer from Ryan McBroom in the sixth inning, Greg Holland led a parade of four relievers that kept the Minnesota Twins' mighty offense in check. By the time Trevor Rosenthal worked a perfect ninth for his second save, Kansas City had a 3-2 victory — and back-to-back wins after a brutal six-game slide.

“Especially against a team like this — they're hot, they're play great. This was a huge momentum-builder for us,” McBroom said. “You can't really ask for much more, especially from our pitching. We did a great job in all aspects of the game.”

Nick Heath and Nicky Lopez also drove in runs for the Royals, who got a strong start from Jakob Junis before Holland (2-0) and Co. took over. The only runs the staff allowed were solo homers by Byron Buxton and Marwin Gonzalez.

“Solo homers, we can deal with those,” said Junis, who worked into the fifth inning. “You definitely don't want to give up the homer with two runners on, when you're in a jam and working to get out of the inning. That was my focus.”

“They kept going, and we weren’t able to muster anything else up or really even get a ton of baserunners or opportunities,” Twins manager Rocco Baldelli said. "That is going to happen. I’m not really sure if I can point to anything specific. They went out there and threw the ball really well. They have good ability, that’s for sure. We’re going to have to get better at-bats and find ways to get some guys on base.”

The quintessential power-versus-pluck game played out through the first five innings.

The Twins, who came into the game fourth in the league in homers, got another when Buxton went deep for the second straight night leading off third. Gonzalez hit his over the center field fence with one down in the fourth.

The Royals, whose popgun offense came alive with 13 runs against the Cubs on Thursday, resorted to small-ball to coax across their first runs. Maikel Franco scored in the third after a double, sacrifice bunt from Lopez and a base hit by Heath, and Alex Gordon scored in the fifth after a single, Franco's groundout and Lopez's sharp single.

Whit Merrifield nearly broke the game open with a three-run shot later in the fifth, but Twins left fielder Nick Cave drifted back to the wall and made a leaping grab in front of the Minnesota bullpen to keep the game knotted 2-all.

The Royals finally got a long-ball of their own when McBroom hit the second of his career in the sixth.

“I watched him in Triple-A before we got him and the ball was just jumping off the guy's bat to the point you couldn't ignore it,” Royals manager Mike Matheny said. “He has that ability to get the ball to carry with some loft.”

The game was halted in the fifth inning for a sudden downpour that was over so quickly the grounds crew never fully got the tarp unrolled. In fact, most of the players never left the field before resuming after a 9-minute delay. The game pressed on the rest of the way despite constant thunder and lightning.

Before the game, the Royals reinstated RHP Jorge Lopez from the bereavement list and designated him for assignment. They also reinstated RHP Chance Adams from the injured list and optioned him to their alternate training site, and they transferred LHP Mike Montgomery (lat strain) and RHP Glenn Sparkman (right forearm strain) to the 60-day IL.

Royals: Heath (left hamstring strain) left in the fifth inning. Brett Phillips replaced him. ... RHP Josh Staumont (sore back) after retiring two batters. ... RF Hunter Dozier is progressing at the club's alternate site after returning from COVID-19. “He's feeling good health-wise and I think it's just that timing,” Matheny said. “It just takes a little while.”

Twins: 3B Josh Donaldson (right calf strain) was placed on the IL retroactive to Tuesday. He was hurt against the Indians on July 31. ... 2B Luis Arraez (sore right knee) was out of the lineup for the second straight day.

Twins RHP Jake Odorizzi makes his season debut Saturday against his former team after missing the start of the season with a right intercostal strain. He will face Royals LHP Danny Duffy (0-2, 4.11 ERA).

“Is Jake going to go out there and throw 110 (pitches) in his first start? No,” Baldelli said. “We're just going to let him pitch and hopefully he can pitch us somewhere into the middle of the game.”