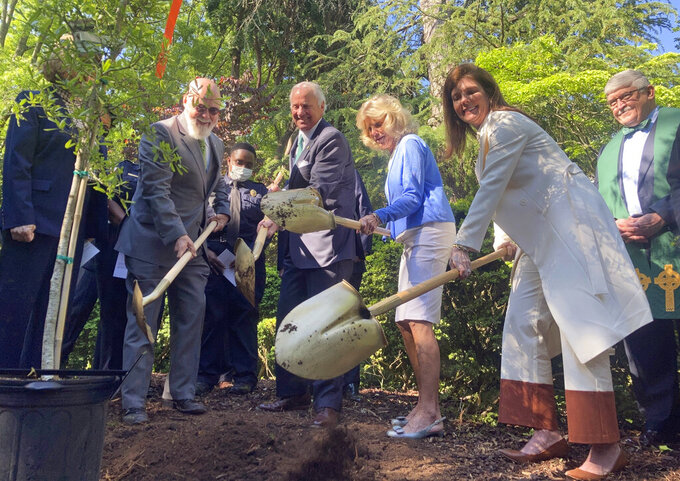 COLUMBIA, S.C. (AP) — Schoolchildren and other volunteers are scattering more than three million loblolly pine seeds across South Carolina on Thursday in an effort to help mitigate the effects of disastrous flooding statewide, government officials said.

The Earth Day event, announced by Gov. Henry McMaster and South Carolina Floodwater Commission Chairman Tom Mullikin, is the first tree planting effort of its scale statewide. The officials said that the trees are one of a number of solutions that emerged from a 2019 by the commission addressing flood risks.

Those gathered on the grounds of the Governor's Mansion on Thursday ceremoniously sifted dirt over seed with gold-toned shovels. Volunteers, from public schools in all 46 counties to churches and private companies, were doing the same with their seed packets that day.

Mullikin emphasized the need to address the state's flood risks given the visitors who flock yearly to South Carolina to enjoy the outdoors. South Carolina has sustained more than $4 billion in flooding damages at the state level since Hurricane Joaquin in 2015, he added.

“What you see coming together is the nexus of a strong economy and a strong ecology,” Mullikin said.

The loblolly, grown abundantly in the South for commercial uses such as newsprint and toilet paper, was chosen because of its prevalence across the state, officials said. A mature tree will absorb up to an estimated 11,000 gallons of water (about 42,000 liters) and 133 pounds (about 60 kilograms) of carbon dioxide, according to USDA Forest Service research.

The planting drew on the contributions of both public and private agencies, Mullikin said, noting the help came mostly in the form of elbow grease, not cash. The project got less than $50,000 in outside funding, he estimated.

The 3.4 million seeds provided by the state forester were then packaged in February 2020 by young women incarcerated at the Camille Griffin Graham Correctional Institution, who filled manila envelopes with about 60 seeds each, said Chrysti Shain, spokeswoman for the South Carolina Department of Corrections.

Those seeds went into cold storage once the pandemic started and derailed plans for an Earth Day planting that year.

The renewed effort this year, being the first of its kind, won’t focus on particularly flood-prone areas; future years will target those places. Some of the seeds will be planted on private land by partners such as Fujifilm, officials said.

Though the commission isn't tracking how many seeds make it to saplings, Mullikin estimated about 3 million trees to emerge from the seeds, accounting for attrition.