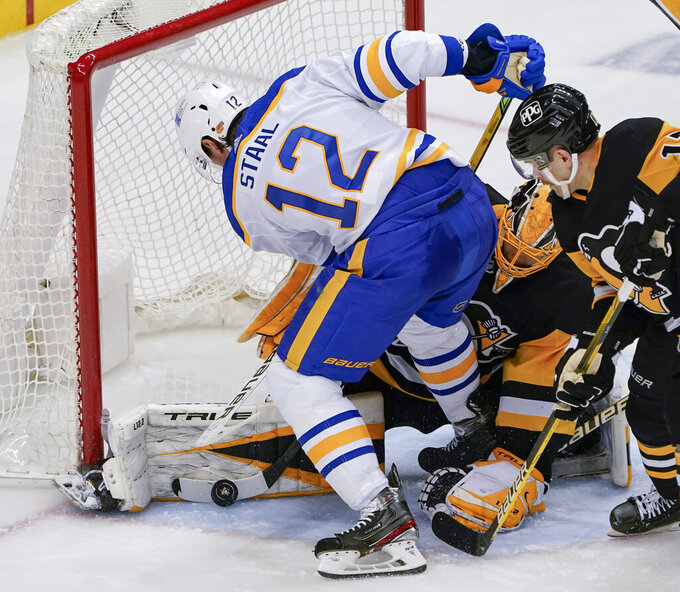 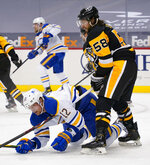 Buffalo acquired the Canadiens’ third and fifth-round selections in the 2021 draft. The Sabres also agreed to retain $1,625,000, which represents half of the final year of Staal’s salary.

“The professionalism Eric displayed during his time with the Sabres was felt by everybody in our organization from top to bottom,” first-year Sabres general manager Kevyn Adams said. “I know his leadership and demeanor were valued by our players, coaches and staff, and Eric’s impact on our young players is obvious."

Staal is a 17-year veteran, who can provide the Canadiens a late-season boost to their playoff hopes. Staal won’t be able to join the team immediately because he will have to first quarantine under Canadian health regulations for those traveling from outside the country.

Unlike other players joining a team north of the border this season, Staal will only need to quarantine for seven days — not 14 — after the Canadian government approved an exception for NHL players traded from U.S. teams. Staal will be subject to daily virus testing during his quarantine and will could play for the Canadiens as soon as April 3 or 5.

Montreal is 2-2-2 in its past six and 14-8-9 overall. With 37 points, the Canadiens sit fourth in the North Division, two ahead of Vancouver and four up on Calgary.

The Sabres, by comparison, are in sell-off mode.

The move comes a day after the Sabres extended their franchise-worst winless skid to 16 games with a 4-0 loss at Pittsburgh. Buffalo, which plays at Boston on Saturday, is 0-14-2 in its past 16, which marks the NHL’s longest streak since the Penguins went 0-17-1 during the 2003-04 season.

The Sabres have a league-low six wins and been shut out seven times this season, while all but mathematically in position to extend their playoff drought to a NHL record-matching 10th season.

Staal is expected to be but the first of several Sabres players on the move before the NHL’s trade deadline on April 12.

Forward Taylor Hall, signed in October to a one-year, $8 million contract, acknowledged following the loss at Pittsburgh that he would be open to waiving his no-trade clause. Others on the trade block include defensemen Brandon Montour and Colin Miller.

The Sabres were informed of Staal being traded following practice in Boston, forward Kyle Okposo said.

“We just got off the ice to go wish him well. He’s a character guy,” Okposo said, while acknowledging more moves are likely coming. “It’s pretty obvious. I mean, nobody’s naive here. Everybody knows what’s going on with the situation that we’re in.”

Buffalo acquired the 36-year-old Staal in a trade that sent forward Marcus Johansson to Minnesota in September. It was the first trade completed by Sabres GM Kevyn Adams, who took over after Jason Botterill was fired in June.

Adams was teammates with Staal on the Carolina Hurricanes’ 2006 Stanley Cup championship team. Staal was targeted to address Buffalo’s need for a second-line center, and added experienced leadership to a team with a reputation of being fragile.

Selected by Carolina with the No. 2 pick in the 2003 draft, Staal spent his first 11-plus seasons with the Hurricanes. He played a 20-game stint with the New York Rangers to close the 2015-16 season, and then joined Minnesota.

NOTES: Okposo resumed practicing Friday after missing three games with a neck injury. It’s unclear if he’ll be cleared to play Saturday. ... Interim coach Don Granato and assistant Matt Ellis were scheduled to rejoin the team a day after being placed in the NHL’s COVID-19 protocol which required them to remain in self-isolation in Pittsburgh. GM Kevyn Adams was forced to step in as coach against Pittsburgh.