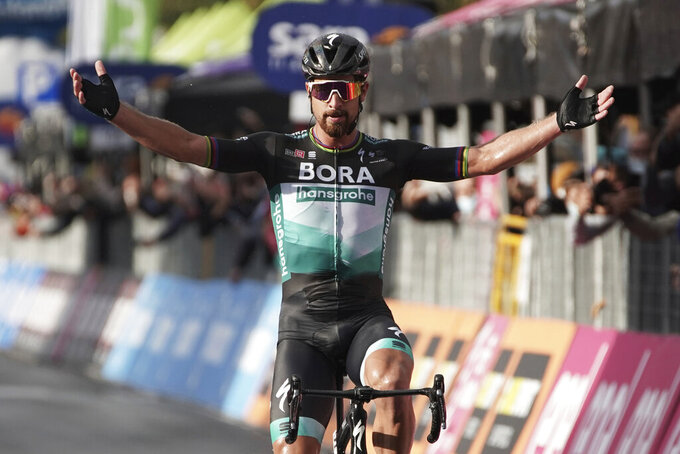 Slovakia's Peter Sagan celebrates as he crosses the finish line to win the tenth stage of the Giro d'Italia cycling race from Lanciano to Tortoreto, Italy, Tuesday, Oct. 13, 2020. (Gian Mattia D'Alberto/LaPresse via AP)

TORTORETO, Italy (AP) — Peter Sagan won the hilly 10th stage of the Giro d’Italia, which was contested Tuesday despite two teams withdrawing from the race because of coronavirus cases.

Sagan, a three-time world champion who is racing the Giro for the first time, was desperate for a win after three second-place results in the race. He now has won stages in all three Grand Tours — the Giro (1), Tour de France (12) and Spanish Vuelta (4).

And the Slovakian rider did it in style on Tuesday, getting into an early breakaway and then launching a solo uphill attack in the final stages on roads made treacherous by rain. It was Sagan’s first win of the season.

“Finally I won in my style — with a show,” Sagan said.

The race was disrupted before the stage when the Mitchelton-Scott and Jumbo-Visma teams withdrew.

Kruijswijk, Matthews and Mitchelton-Scott were withdrawn from the event in accordance with race organizers. Jumbo-Visma then announced minutes before the stage started that it was withdrawing the rest of its team, too.

But the stage started as scheduled and Sagan needed just over four hours to complete the 177-kilometer (110-mile) leg from Lanciano to Tortoreto in the central Abruzzo region.

Sagan got into an early seven-man breakaway that also featured time trial world champion Filippo Ganna. He then attacked Ben Swift — the only other remaining member of the breakaway — with 12 kilometers (7.5 miles) to go.

American rider Brandon McNulty crossed second, 19 seconds behind, and Almeida was third to lead the main pack, 23 seconds behind.

Stage 11 on Wednesday is a mostly flat 182-kilometer (113-mile) leg from Porto Sant’Elpidio to Rimini along the Adriatic coast that sets up well for sprinters.

The race was rescheduled from its usual May slot because of the coronavirus pandemic. The Giro ends on Oct. 25 with an individual time trial in Milan.