Salzburg players out of national teams after 6 virus cases 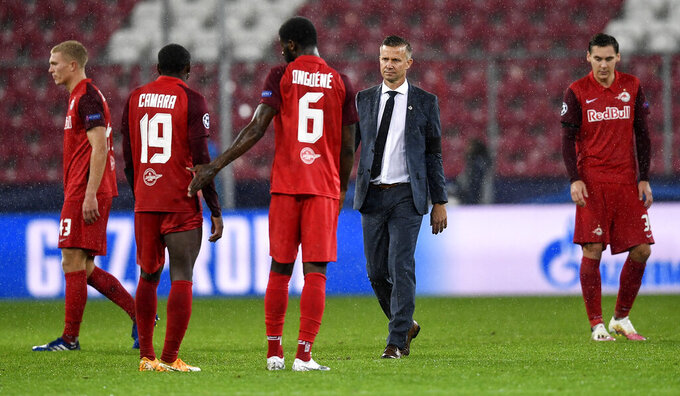 SALZBURG, Austria (AP) — Austrian soccer club Salzburg stopped its players from joining their national teams on Monday after six coronavirus cases were found in the squad.

The Austrian champions said they received results on Sunday showing six positive tests among players who were due to head to their national teams during the international break. Salzburg hasn't named the players and said they were all in isolation and no one was showing symptoms.

The cases cause yet more disruption for upcoming international games as coronavirus case numbers rise across Europe. Clubs in Germany and Italy have also delayed releasing players or refused to release them.

Salzburg said everyone at the club tested negative in samples taken on Friday before the team drew with Rapid Vienna 1-1 on Sunday. Another round of testing was planned for Monday.

The club said “all international callups ... have also been rejected for now" and the situation could change once players have undergone more tests.

Midfielder Dominik Szoboszlai was in line to miss Hungary's playoff game against Iceland on Thursday for a place at next year's European Championship. Hungary also has upcoming Nations League games against Serbia and Turkey.

The positive tests at Salzburg could leave Austria needing replacements ahead of its upcoming games. Salzburg goalkeeper Cican Stankovic and defenders Andreas Ulmer and Albert Vallci were all named in the Austria squad last week.

Austria plays Luxembourg in a friendly on Wednesday and then Nations League games against Northern Ireland and Norway.

Mali will have to cope without Salzburg midfielder Mohamed Camara and forward Sekou Koita. Midfielder Masaya Okugawa was in line to make his debut for Japan in upcoming friendlies.

In Italy, Roma and Fiorentina's squads were in isolation after positive tests. That has stopped players who tested negative from joining their national teams.

British restrictions on entry for people who have been in Denmark led to the Danish team replacing players from English clubs for its friendly against Sweden.

FIFA said last month clubs could refuse to release players who faced at least five days in quarantine on their return. Normally clubs can face sanctions if they don’t let players join their national teams.

The Czech team reported a coronavirus case before its friendly against Germany in Leipzig on Wednesday. The federation said the unnamed player would stay in isolation and the rest of the squad would travel for the game.

The Czech Republic also plays Nations League games against Israel on Sunday and Slovakia on Wednesday next week.