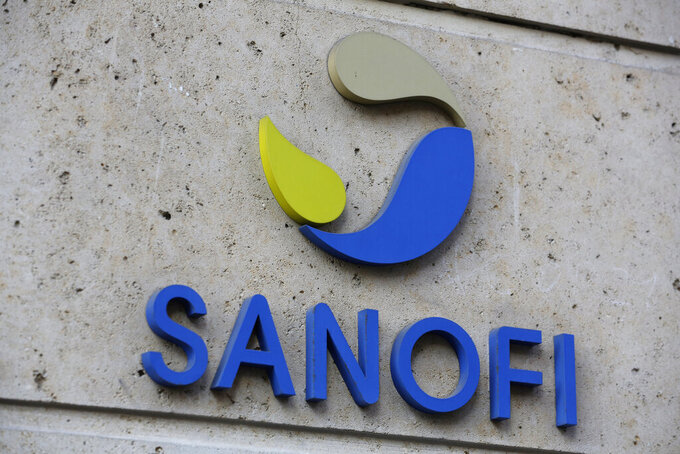 FILE - In this photo Nov.30, 2020 file photo the logo of French drug maker Sanofi is picture at the company's headquarters, in Paris. Sanofi and GlaxoSmithKline's potential COVID-19 vaccine triggered strong immune responses in all adult age groups in preliminary trials, boosting optimism that the shot may join the fight against the pandemic by the end of this year. (AP Photo/Thibault Camus, File)

PARIS (AP) — Sanofi and GlaxoSmithKline’s potential COVID-19 vaccine triggered strong immune responses in all adult age groups in preliminary trials after an earlier setback, boosting optimism the shot may join the fight against the pandemic this year.

After two doses of the vaccine candidate, participants showed neutralizing antibodies in line with those found in people who had recovered from the disease, according to results of the Phase 2 trial released Monday. The drugmakers said they plan to begin late-stage trials and production in the coming weeks and hope to win regulatory approval for the vaccine before the end of 2021.

Regulators have already authorized a number of COVID-19 vaccines, though experts say more are needed as public health authorities around the world race to vaccinate their residents amid a pandemic that has already killed more than 3.3 million people and caused economic havoc.

The Sanofi-GSK vaccine was an important part of the European Union's vaccination strategy, and had notably been championed by French President Emmanuel Macron's government. But researchers had to reformulate it after early testing produced an inadequate immune response in older people.

The Sanofi-GSK candidate joins about a dozen vaccines now undergoing late-stage trials. The companies plan to produce up to 1 billion doses annually, and they have signed agreements to supply the U.S., Canada and developing countries, too. Public health experts say several vaccines will be needed to end the pandemic, because of the challenges in rapidly producing and distributing enough doses to vaccinate billions of people.

“We know multiple vaccines will be needed, especially as variants continue to emerge and the need for effective and booster vaccines which can be stored at normal temperatures increases,” said Thomas Triomphe, head of Sanofi’s vaccines unit.

The results released Monday were from a Phase 2 trial involving 722 volunteers aged 18 to 95 who were recruited in the U.S. and Honduras.

The vaccine showed even stronger antibody results in people who had already recovered from the virus. Sanofi said that makes it a potentially strong candidate as a booster shot in the future for those who have already been vaccinated with rival products.

The late-stage trial will involve about 37,000 participants from countries around the world, the companies said. They plan to study its efficacy against the virus variant first identified in South Africa, and potentially others as well.

After the initial setback, Sanofi struck agreements to help bottle or produce rival vaccines designed by Pfizer, Moderna and Johnson&Johnson. The progress in the Sanofi-GSK vaccine will not disrupt those production plans, Triomphe said.