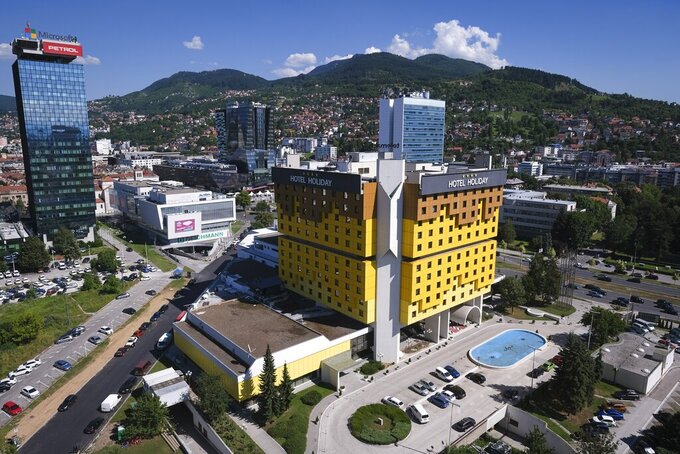 The Holiday Hotel, which opened as Holiday Inn, a luxurious accommodation for world's royalty, film stars and other dignitaries who came to watch the 1984 Winter Olympics, and less than a decade later, became ground zero of the bloody siege of Sarajevo in the 1990's, photographed from a nearby building, in Sarajevo, Bosnia, Wednesday, July 29, 2020. The bright yellow Holiday Hotel in downtown Sarajevo, a famous symbol of survival of the Bosnian capital, has seen good and bad times in its turbulent history, but now the landmark's survival is in more danger than ever, with the coronavirus pandemic leaving it with only a few occasional guests. (AP Photo/Kemal Softic) 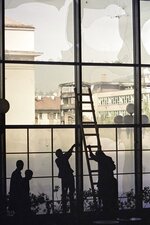 SARAJEVO, Bosnia-Herzegovina (AP) — The bright yellow Hotel Holiday in downtown Sarajevo has seen good times and bad times in its 37-year history. Mostly, it has been a symbol of survival in the once-turbulent Bosnian capital.

Now the boxy landmark is in danger once again, with the coronavirus pandemic leaving it with few guests.

Bosnia, like the rest of the Balkans, has been hit hard by the virus. Cases have been rising in Bosnia since mid-May, when a strict lockdown was lifted and many people seemed to start disregarding social distancing rules and ditching masks.

The country of 3.5 million has reported nearly 10,500 cases and 294 deaths, many since the restrictions were eased.

Amid the pandemic, there are hardly any tourists or business travelers visiting the capital, leaving the hotel with many empty rooms.

It originally opened as part of the Holiday Inn hotel chain and was luxurious accommodation for royalty, movie stars and other dignitaries who came to the 1984 Winter Olympics.

Less than a decade later, it was ground zero for the bloody siege of Sarajevo in the 1990s and an uneasy shelter for the many foreign journalists who arrived to cover the conflict.

“The hotel was working all the time through the war,” said general manager Zahid Bukva, who has been employed there since it opened in 1983.

“There was so much shelling and sniping aimed at our hotel, it was devastating,” he said. “There wasn’t a single window left intact here. But even then, we fought and we provided the service to these foreign journalists.”

The hotel, controversial from the start because of its bright color and Lego-like structure, was often targeted by Serbs in the nearby hills during their three-year siege of the capital that left thousands dead and injured in the capital.

It survived several direct hits from grenades and shells, as well as constant sniper fire that prompted journalists and staff to use side doors instead of the main lobby entrance.

Just before the start of the war in 1992, former Bosnian Serb leader Radovan Karadzic — now a convicted war criminal — used the hotel as his headquarters, surrounded by armed men wearing masks to hide their identities.

They were believed to be Serbian security officers who fired their sniper rifles from the hotel at peaceful protesters in April 1992 — the incident believed to have triggered the start of the civil war that left more than 100,000 dead and millions homeless.

As journalists rushed to Sarajevo to cover the escalating tensions, the Holiday Inn became the place to be. At the end of a dangerous day, they often swapped their front-line experiences and stories in a ground-floor restaurant.

“This hotel became something as a front line for a period,” said Kenneth Morrison, a history professor at De Montfort University in Leicester, England, who wrote a book about it.

“It was used exclusively by journalists, aid workers and some diplomats,” he said. “The courage and resourcefulness of the staff during those difficult times is an incredible story in itself.”

He said the hotel “faced many challenges in its relatively short history.”

"It's only 37 years old, but in many ways, the challenges it’s facing now are far more significant,” Morrison said of the pandemic.

“One can only hope that this building, which survived all that’s been thrown at it, can survive this latest crisis,” he said.

“The hotel survived through a lot, and I think that we will overcome this corona crisis,” he said.