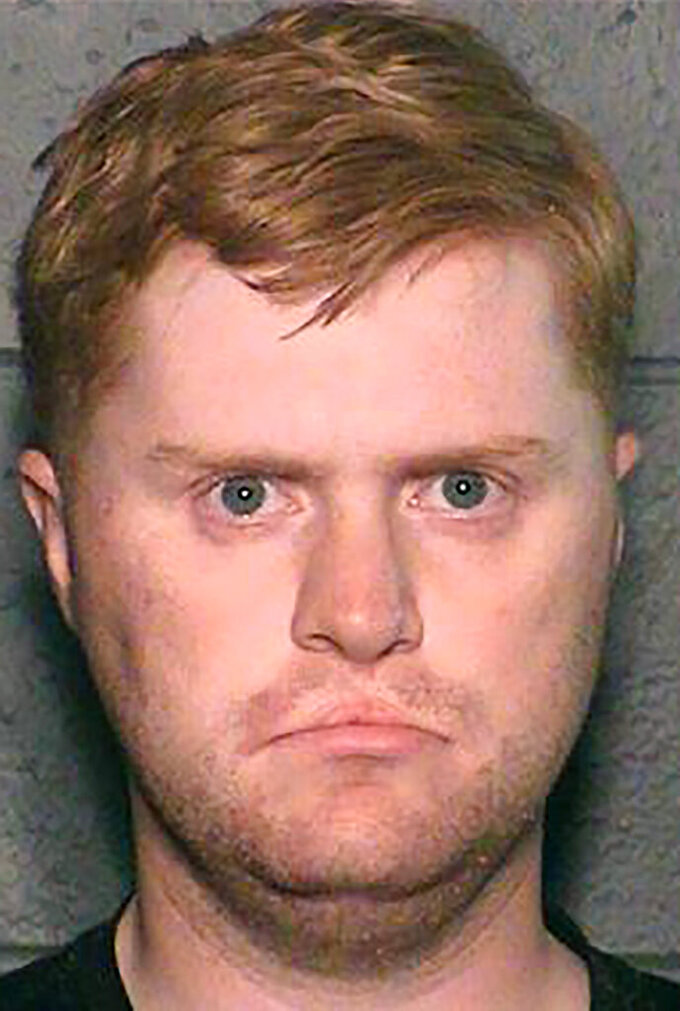 FILE - This undated photo provided by the Riley County (Kansas) Police Department shows Jarrett Smith. Smith, a former U.S. soldier described by prosecutors as a Satanist has been sentenced to 2 1/2 years in federal prison for distributing information through social media about building a bomb and making napalm. A federal judge on Wednesday, Aug. 19, 2020, rejected a request from Smith's attorney for a lenient sentence of 15 months. Smith pleaded guilty in February to two felony charges of distributing explosives information.   (Riley County Police Department via AP,File)

TOPEKA, Kan. (AP) — An ex-soldier described by prosecutors as a Satanist and linked to a neo-Nazi group was sentenced Wednesday to 2 1/2 years in federal prison for distributing information through social media about building a bomb and making napalm.

A federal judge rejected a request from Jarrett William Smith's attorney for a lenient sentence of 15 months in prison followed by three years of supervised probation. Federal law called for a sentence of up to 20 years in prison and a fine of up to $250,000, but sentencing guidelines said the presumed punishment for a first-time offender like Smith was 2 1/2 years to a little over three years in prison.

U.S. District Judge Daniel Crabtree said he was surprised that federal sentencing guidelines called for such a “low” sentence for “troubling and serious” criminal behavior. He also said that Smith wanted to start a race war and shared on social media “multistep plans to create chaos."

“His planned actions, if executed, would have endangered countless members of the public,” Crabtree said from the bench.

In seeking the lighter sentence, Smith's attorney said that because of a cleft lip and palate, Smith had endured a lifetime of victimization, isolation and trauma, which led him to become involved with online extremist groups. The Anti-Defamation League has said Smith was associated with the neo-Nazi Feuerkrieg Division, which it says advocates for a race war and promotes some of the most extreme views of the white supremacist movement.

Smith, 24, was a private first class stationed at Fort Riley when he was arrested last year.

“He's not far removed from adolescence,” Federico told the judge. “He is particularly vulnerable to extremists online.”

Prosecutors argued that Smith admitted to providing information about making explosives to an FBI undercover agent in September 2019 and that FBI bomb technicians determined that his recipes were viable. He pleaded guilty in February to two felony charges of distributing explosives information and admitted that he intended for it to be used.

Prosecutors said that Smith planned to overthrow the government, with attacking a news organization as a first step. They said he told an FBI agent that he distributed explosives information “for the glory of his Satanist religion,” though they provided few other details, other than saying that Smith liked “black metal” music designed to attract people to Satan.

Federal investigators have said Smith had encrypted communications with a Missouri man who this year planned to bomb a Kansas City-area hospital because he was distressed by the government’s response to the coronavirus pandemic. That man killed himself in March during a firefight with FBI agents as they served an arrest warrant, according to the FBI.

Smith admitted in his plea agreement that he spoke to others about his desire to travel to Ukraine to fight with “a violent, far-right paramilitary group.”

Smith previously was stationed at Fort Bliss, Texas. He was discharged from the military after pleading guilty to the two charges.

Federico said in a court filing that Smith endured a near-daily barrage of bullying as a child and had repeated, painful reconstructive surgeries.

In 2010, when he was a freshman in high school, Smith learned he had been on a classmate’s “hit list” as the intended target of a school shooting and bomb plot. The attempt was thwarted.

“That has a huge impact on who you are,” Federico told Crabtree on Wednesday.

But Assistant U.S. Attorney Anthony Mattivi countered that Smith wasn't examined for or diagnosed with a mental illness.

“What the defendant experienced is sad, and I have sympathy for him,” Mattivi told the judge. “But it has to be balanced against what he did.”