Saudi Arabia to launch app for Mecca pilgrims amid virus 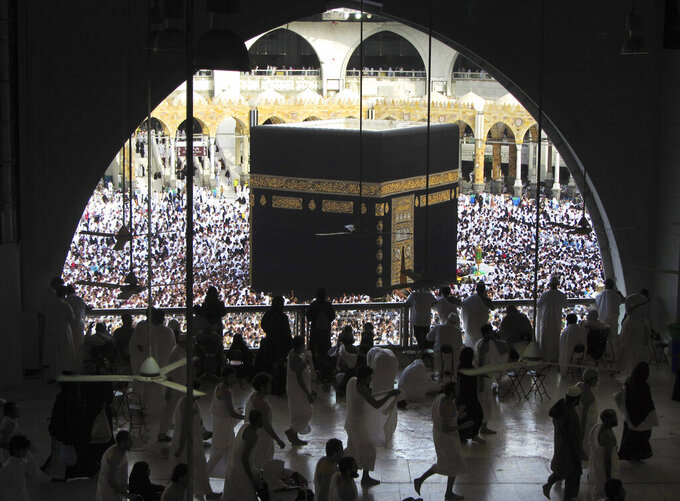 FILE - In this May 25, 2019 file photo, Muslim worshippers circumambulate the Kaaba, the cubic building at the Grand Mosque, during the minor pilgrimage, known as Umrah in the Muslim holy city of Mecca, Saudi Arabia. Authorities on Monday, Sept. 21, 2020, released new details on how it plans to gradually allow Muslims back to Islam's holiest site in Mecca to perform the smaller-year-round pilgrimage, which has been suspended for the past seven months due to the coronavirus (AP Photo/Amr Nabil, File)

RIYADH, Saudi Arabia (AP) — Saudi Arabia on Monday released new details on how it plans to gradually allow Muslims back to Islam's holiest site in Mecca to perform the smaller, year-round pilgrimage, which has been suspended for the past seven months due to the coronavirus.

Hajj Minister Muhammad Benten said the kingdom will launch an online application that allows citizens, residents of Saudi Arabia and visitors to apply and reserve a specific time and date in which they can perform the pilgrimage, known as “umrah,” to avoid crowding and maintain social-distancing guidelines.

The minister, who spoke during a virtual seminar, did not say when the pilgrimage would be permitted to resume nor how many people would be allowed to perform it at the same time.

Saudi Arabia on Monday began easing some restrictions on international flights for the first time in six months.

Despite taking early and sweeping measures to contain the virus, Saudi Arabia has recorded more than 330,000 cases, including more than 4,500 deaths.