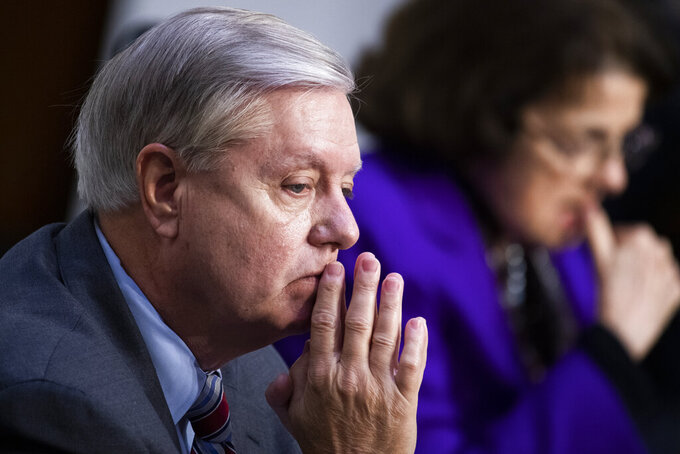 On Thursday, the South Carolina Democratic Party said Graham “committed a crime and violated longstanding ethics rules by openly raising money for his campaign in a Federal government building while leveraging his official U.S. Senate activity.” A copy of the complaint was filed with the U.S. Senate Select Committee on Ethics and obtained by The Associated Press.

The complaint urges the committee “to immediately investigate Senator Graham's actions and take appropriate remedial action” in the matter.

Although Senate work has technically been called off this week due to several members' exposure to the coronavirus, work in the Senate Judiciary Committee has gone on, with confirmation hearings for U.S. Supreme Court nominee Amy Coney Barrett. As chairman of that committee, Graham has been at the helm of this week's televised hearings, playing a visible role and speaking on the sidelines with reporters.

After the conclusion of Wednesday's hearings, Graham was asked by reporters about fundraising in his expensive reelection contest with Democratic challenger Jaime Harrison, and how the televised proceedings might be affecting that race.

“I don’t know how much it affected fundraising today, but if you want to help me close the gap — LindseyGraham.com — a little bit goes a long way," Graham said. “I feel really good about my campaign.”

Bishop also said he was “confident any reasonable person will see that any possible violation was unintentional and does not represent a pattern of behavior.”

It's unclear how the committee, headed by U.S. Sen. James Lankford of Oklahoma, would view the complaint. As written in the U.S. Senate’s Rules and Standards of Conduct, “Senate Members and staff may not receive or solicit campaign contributions in any federal building.”

Much of the regulation goes on to discuss specific prohibitions on how to handle campaign-related contributions that may arrive at a lawmaker's Capitol Hill office, advising Senate employees “to avoid even the appearance of any connection between official Senate activities and the receipt of campaign contributions” — and draw distinct lines between Senate services and any campaign contributions.

Graham is seeking his fourth term in the U.S. Senate and previously served several terms in the U.S. House. Given his tenure in Washington, South Carolina Democrats characterized the solicitation as inexcusable.

“After 25 years in Washington, Sen. Graham should know better than to spend his time campaigning in the halls of Congress,” party spokeswoman Lauren Brown said in a statement to AP. “This profile in desperate and unethical behavior is unbecoming of a U.S. Senator — and it is yet another demonstration of why Sen. Graham’s time in Congress is coming to an end.”

The allegation comes amid a week of record-breaking fundraising in the race, which is Graham's closest reelection battle to date. On Sunday, Harrison announced he had pulled in a record $57 million in the third-quarter, the largest quarterly fundraise ever for any U.S. Senate hopeful.

Three days later, Graham's campaign announced the $28 million he had raised during the same time period represented the largest amount ever raised by any Republican Senate candidate in a single quarter, in any state.

Graham has previously made public fundraising pleas to help him keep up with Harrison, by whom he said last month on Fox News that he was “getting killed financially.”

“The money is because they hate my guts," he added.

Some recent surveys have shown a tight race. A New York Times/Siena College poll released Thursday showed Graham with a slight lead over Harrison in the state, which has not supported a Democratic U.S. senator since Fritz Hollings’ final reelection bid in 1998.