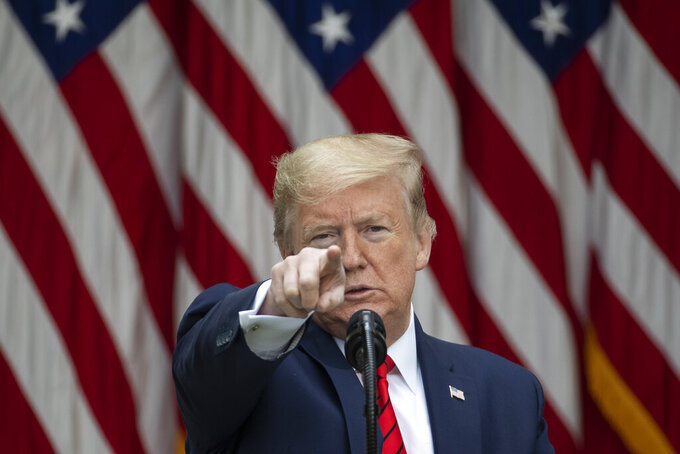 In this May 11, 2020 photo, President Donald Trump points to a question as he speaks about the coronavirus during a press briefing in the Rose Garden of the White House in Washington. Trump has many targets in his war against the media but perhaps none more surprising than the Voice of America, the venerable U.S.-government funded institution created during WWII and expanded during the Cold War to broadcast independent news and promote democracy and American values to the world. In a series of attacks, Trump and his supporters have accused the outlet of “disgraceful” reporting. They're now pushing hard to install their choice to run the agency that oversees VOA and its affiliates. That battle is about to hit Congress, where partisan lines have already been drawn over fears the administration wants to turn them into Trump propaganda machines. (AP Photo/Alex Brandon)

WASHINGTON (AP) — A divided Senate voted along party lines Thursday to confirm President Donald Trump’s choice to head the Voice of America and other U.S. government-funded international broadcasters that have been the subject of harsh criticism from the White House.

Despite significant Democratic opposition and concerns over his fitness for the job, the Senate voted 53-38 to confirm Michael Pack to run the U.S. Agency for Global Media, which oversees VOA and its sister outlets including Radio Free Europe/Radio Liberty, Radio Free Asia and the Cuba-oriented Radio and Television Marti.

Democrats opposed the nomination of Pack, a former associate of Trump political adviser Steve Bannon, in part because of questions about his past business dealings. Recent criticism of VOA from Trump and the White House has intensified their concerns about his nomination.

Trump had pushed for Pack’s confirmation while launching unprecedented attacks on the Voice of America, the venerable broadcaster created during World War II to air independent news and promote American values to the world, for its coverage of China’s response to the coronavirus pandemic.

Democrats feared that Pack, a conservative filmmaker and former educator, could turn the organization into a Trump propaganda machine funded with more than $200 million a year in taxpayer money. Trump has mused about his desire to control a media outlet.

“Congratulations to Michael Pack!” the president tweeted Thursday. “Nobody has any idea what a big victory this is for America. Why? Because he is going to be running the VOICE OF AMERICA, and everything associated with it.”

Pack has dismissed concerns he would allow the organization to turn into a Trump propaganda machine, but the recent furor has reignited those concerns. Democrats on the Senate Foreign Relations Committee tried unsuccessfully eight times to postpone consideration of the nomination two weeks ago. New Jersey Sen. Bob Menendez and others argued it should be delayed because Pack had not answered questions about discrepancies in tax returns related to a nonprofit organization he runs.

Menendez on Thursday said the Senate was setting a “dangerous precedent” by moving ahead.

“We live in an era where the extraordinary quickly becomes routine, but even by that metric Mr. Pack’s path to this floor has been a disgrace,” Menendez said.

An initial committee vote had been delayed in early May, after the Washington, D.C., attorney general informed Menendez and committee chairman Jim Risch, R-Texas, that it had an open civil investigation into the tax return discrepancies.

Yet, the uproar over Voice of America and its recent coverage of China’s handling of the coronavirus pandemic overshadowed the possible legal issues. It has become a touchstone in the Trump administration’s efforts to criticize Chinese authorities for the outbreak and deflect criticism of the U.S. response as the 2020 presidential campaign heats up.

Trump and his allies have long viewed VOA with suspicion, regarding it as an element of a “deep state” trying to thwart their policies. The hostility burst open on April 9, when Trump communications adviser Dan Scavino posted a VOA story about China to his official Twitter account with the comment “American taxpayers—paying for China’s very own propaganda, via the U.S. Government funded Voice of America! DISGRACE!!”

The story that VOA posted — about the lifting of the lockdown in the Chinese city of Wuhan, where the new coronavirus first emerged — was actually an Associated Press report, but the following day, an official White House publication accused VOA of using taxpayer money “to speak for authoritarian regimes.” Trump weighed in several days later, calling VOA’s coverage “disgusting” and demanding that the Senate confirm Pack.