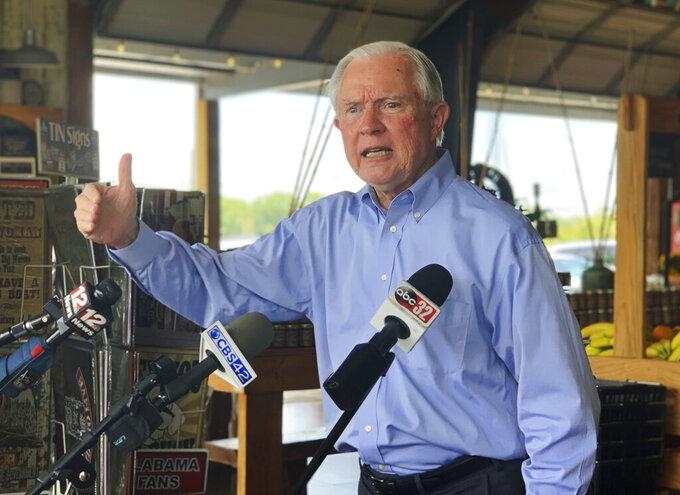 The Republican Senate runoff for U.S. Senate and three contests to select party nominees for two open U.S. House seats are the highlights of Tuesday's election in Alabama.

Here is a look at the top races on the ballot:

While Sessions previously served in the Senate for two decades from Alabama and was the first member of Congress to endorse Trump in 2016, the president is supporting Tuberville, who coached at Auburn University for 10 seasons ending in 2008.

Sessions, who angered Trump by stepping aside from the investigation into Russian meddling in the last election, is still portraying himself as solidly in Trump's corner. But Trump has harshly criticized Sessions while tweeting his support for Tuberville, who is making his first bid for political office.

Tuberville narrowly led Sessions in voting in the March primary, which included five other candidates. Turnout in the runoff could be light, partly because of the limited ballot and also because of the worsening coronavirus pandemic in Alabama.

The race to replace Rep. Bradley Byrne in the 1st District of southwest Alabama includes a runoff on both the Republican and Democratic sides.

Jerry Carl and Bill Hightower are both portraying themselves as Trump-supporting conservatives as they seek the GOP nod for the seat held by Byrne, who finished third in the Senate race in March and didn't seek re-election to the House.

Carl, the president of the Mobile County Commission, has started multiple companies. Hightower is a business operator who served five years in the Alabama Senate.

Kiani A. Gardner and James Averhart are vying for the Democratic nomination in District 1. A native of Hawaii, Gardner led primary balloting but had to sideline her runoff campaign for a time after donating a kidney to a stranger in Birmingham. Averhart is a military veteran who served as president of a national Marines group.

Each billing himself as conservative who supports President Trump, Jeff Coleman and Barry Moore will meet in a runoff for the Republican nomination for the District 2 House seat now held by Rep. Martha Roby, who didn't seek another term.

Coleman, a native of Dothan, runs a family-owned moving and storage company in southeast Alabama, where the district is located. Moore, who grew up on a farm in Coffee County, served two terms in the Alabama House ending in 2018.

The eventual nominee will be a favorite in the Republican-leaning district in November against Democrat Phyllis Harvey-Hall.

Fred Bell and Tonya Smith Chestnut are competing for the Democratic nomination for the 5th District seat on the Alabama Board of Education.

Bell is a former member of the Montgomery City Council who served as a part-time municipal judge. Chestnut is a retired educator with 36 years of experience working in a number of classroom and administrative roles in the district, which includes much of central and southwestern Alabama.

The seat is now held by Tommie Stewart, who was appointed following the death of longtime board member Ella Bell last year.

The winner will face Republican nominee Lesa Keith in the fall.

Criminal Appeals Judge Beth Kellum will meet Will Smith in a runoff for the Republican nomination for the Place 2 seat.

Kellum, who has served on the court since 2009, led a three-person field in March but couldn’t get a majority. Smith is a former member of the Lauderdale County Commission.

The five-member court is composed entirely of Republicans. No Democrat is seeking the Place 2 position so winning the runoff will be tantamount to election.