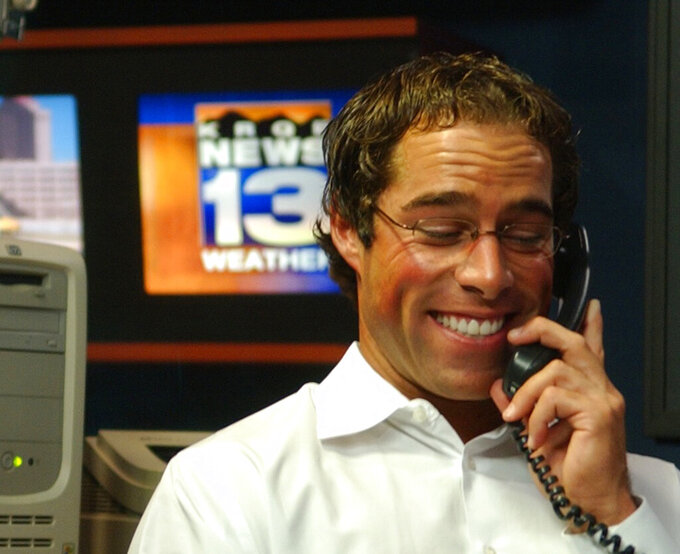 SANTA FE, N.M. (AP) — A Latino congressman and mainstay of Democratic politics in northern New Mexico is vying for an open U.S. Senate seat against a television-savvy Republican challenger with household name recognition as a former network meteorologist based in Albuquerque.

The race between U.S. Rep. Ben Ray Luján of Nambé and first-time candidate Mark Ronchetti is testing the statewide appeal of a six-term congressional Democrat who signed former President Barack Obama’s health care overhaul and is fighting to preserve it in the age of COVID-19.

Ronchetti is running as a “faith, family and freedom” Republican with a tough-on-crime platform and endorsements from the National Rifle Association, a major police association and pro-gun rights sheriffs. He also condemns career politicians and toxic politics in Washington — amid his blistering ads against Luján.

“My whole career has been based on really communicating to people complicated concepts and in getting people on board,” Ronchetti said. “Just be straightforward with people, know the issues, and then bring the issues to them in a way that they can not only understand, but can realize how we can chart a new way forward.”

Luján, who touts his own multi-generational local connections to the land and family, is sounding the alarm against Ronchetti as a supporter of President Donald Trump, warning voters of dire consequences if Republicans continue to steer the nation's coronavirus response and shift the ideological balance of the U.S. Supreme Court.

“We introduced a piece of legislation earlier this week to show that we’re willing to negotiate ... that we’re meeting our Republican colleagues halfway,” Luján said. “President Trump is not at the table.”

An opening debate between the candidates is scheduled Oct. 5 — the night before voting by absentee balloting begins across the state.

There are 35 Senate seats up for election this year, with 23 held by Republicans. Democrats would need to pick up three or four seats to take control.

Republicans hope to regain a footing in New Mexico’s all-Democratic congressional delegation. Trump lost the state in 2016 by 8 percentage points, though Hillary Clinton won without a majority as Libertarian presidential candidate and former Republican Gov. Gary Johnson took 9% of ballots.

Ronchetti largely supports the Trump political agenda — on subjects from greater school choice to federal intervention on policing — but says he doesn't agree with every Trump tweet, nor the president's refusal in the first presidential debate to condemn white supremacist groups.

Former Vice President Joe Biden hasn't campaigned in New Mexico. Trump last visitied the state a year ago for a rally in suburban Rio Rancho. Trump was planning another rally in the state before his announcement Friday that he tested positive for the coronavirus.

In July, the Trump administration turned New Mexico into a tactical area on law-and-order efforts by deploying federal agents to Albuquerque, along with other Democrat-led cities. Trump brought relatives of an Albuquerque murder victim to the White House to announce the initiative. That was followed by U.S. Justice Department backing of a legal challenge to pandemic restrictions on reopening private schools from the Democratic administration of Gov. Michelle Lujan Grisham — a distant cousin by marriage of Rep. Luján.

Luján says the nomination process should wait until after the election, noting that the Supreme Court will take up the constitutionality of the Affordable Care Act on Nov. 10.

“It’s Trump’s obligation to nominate somebody,” Ronchetti said. “He has, and it should get a vote in the Senate. But everyone is hypocritical on this, including Ben Ray. ... It's 2016, Merrick Garland should have gotten the vote. But now suddenly there shouldn’t be a vote?”

Regarding health care reforms, Ronchetti said the Affordable Care Act should be replaced through a negotiated solution.

He invokes his own recent experience in signing up his family for “Obamacare” through New Mexico’s health insurance marketplace after leaving a job — describing expensive holes in the coverage such as a $16,000 deductible. In an ad, Ronchetti's school-aged daughter Ava attests, “I have a preexisting condition and my dad would never let me down.”

Luján warns that overturning consumer protections in the Affordable Care Act would have devastating affects in a state with high poverty rates, where residents have flocked to federally subsidized Medicaid since its expansion in 2013.

A former casino dealer, Luján has never lost a state or federal election since winning his first in 2004 as a utility and telecom regulator.

He is the son of Democratic powerbroker Ben Luján Sr., who served as state House speaker from 2001 until his death in 2012. He's also a political ally of U.S. House Speaker Nancy Pelosi, who tapped him to lead the campaign arm of the Democratic House in successful efforts to reclaim a majority in 2018.

“He’s part of a political legacy that is huge,” said Lonna Atkeson, a political science professor at the University of New Mexico. “He’s made his own name recognition, and he has his dad’s for a lot of people too — that’s a powerful name in New Mexico.”

At the same time, this year is Luján’s first political foray beyond his Democrat-dominated northern congressional district into the state’s largest city of Albuquerque and the south of the state where Trump dominated in 2016.

“This is his most competitive campaign ever,” Atkeson said

Libertarian candidate and scientist Bob Walsh also is running for the seat, without ads or a campaign account.

This version corrects the spelling of Walsh.