Senator is 1st Black legislator to serve in both chambers 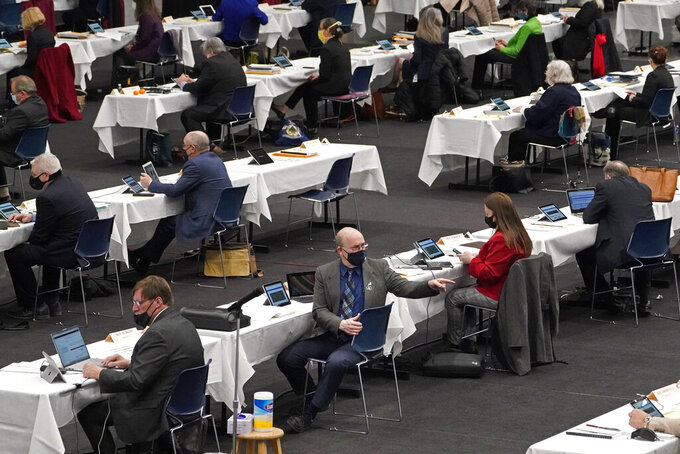 State Rep. Richard A. Pickett. R-Dixfield, turns to ask a question of a fellow legislator at the start off a legislative session, Wednesday, March 10, 2021, at the Augusta Civic Center in Augusta, Maine. (AP Photo/Robert F. Bukaty)

AUGUSTA, Maine (AP) — The Maine Legislature convened for the first time since December after making some history on Wednesday: Sen. Craig Hickman was sworn in as the first Black man to serve in both chambers of the Legislature.

Lawmakers had dozens of bills to consider including a supplemental budget, which won a two-thirds majority in the Senate. Further votes Wednesday evening were necessary for enactment of the budget.

At the Blaine House, Democratic Gov. Janet Mills delivered the oath of office Wednesday morning to the farmer from Winthrop, allowing Hickman to begin full participation in the day's work.

Hickman was the first openly gay Black man to serve in the House, where he completed four terms. He represented Maine in a videotaped virtual roll call during the 2020 Democratic National Convention.

Hickman’s father was one of Tuskegee Airmen in World War II and both of his parents were involved in the civil rights movement.

“Growing up Black and gay and blue collar in America, nobody ever said it was going to be easy. But my experiences have taught me the importance of protecting our communities and standing up for those in need,” he said.

Both chambers gathered at the Augusta Civic Center for the first time in three months. The session was being held at the civic center to accommodate social distancing during the pandemic. Outside, groups gathered to oppose pandemic restrictions and support medical marijuana.

The budget bill would exempt from state taxes the forgivable federal loans provided to 28,000-plus Maine businesses during the pandemic. It also would forgive state taxes on the first $10,200 of enhanced unemployment benefits.

A two-thirds majority vote in each chamber was necessary for the changes to take place immediately and provide clarity to tax preparers and accountants ahead of the April 15 tax filing deadline.

In early votes, the House rejected a proposal to change the state flag in favor of a simple design with a pine tree and a star that proved to be popular during the state's 2020 bicentennial. But there was support for giving clerks more time to process absentee ballots.

The Senate approved a budget with an amendment to help veterans that mustered enough support from Republicans for a two-thirds majority. That left further votes in both chambers.